"Cocktails for the Quarantine" with Edward Gibbons-Brown from Mama Roux

Learn to Make Your Favorite Drinks with this Charming Video Series

Times are tough for people working in the food and hospitality industry. Restaurants and bars across the state closed their doors three weeks ago. It’s uncertain when they will open again. Some will never open again.

Beacon resident Ed Gibbons-Brown has tended bar at a range of establishments in the Hudson Valley over the past decade. Since October, he’s been creating new twists on classic cocktails at Mama Roux in Newburgh. But now, Gibbons-Brown finds himself quarantined in his home without a job like thousands of others.

In an effort to keep busy and to find a way to make a little money, Gibbons-Brown and his roommate Beth Fisher, a film student, decided to create a series of videos called “Cocktails for the Quarantine.” The two transformed their apartment’s living room into a mini studio with a bar set-up and simply use an iPhone to shoot. These short how-to segments feature Gibbons-Brown showing viewers how to make basic cocktails in their homes. Sporting a tropical shirt and blue blazer, Gibbons-Brown imparts his mixology wisdom with some much needed comic relief and flair.

“We've been mainly focusing on easier accessible classic cocktails and the old fashioned seemed like a good place to start,” Gibbons-Brown says. “It's pretty easy to make at home because it's not too many ingredients.”

At the end of his videos, Ed asks his viewers to take a moment to tip their bartender, citing the difficulties servers, bartenders, and others in the hospitality industry are facing without an income. “It's great to be getting takeout from local restaurants and to be supporting businesses, but it's only one side of the coin when it comes to the restaurant industry during this,” he says. “Many people who are already living paycheck to paycheck or are in financially precarious positions found themselves out of work overnight.” 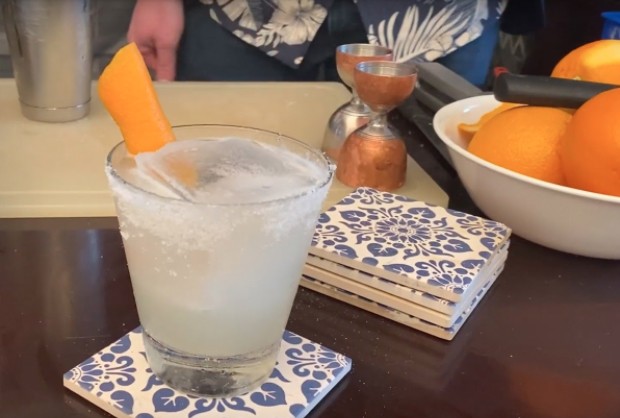 “Tip your bartender” programs have been popping up across social media in an attempt to raise funds in order to provide assistance to those in the industry most affected. These programs give people the chance to virtually talk to bartenders and if they can, tip them for their time.

Gibbons-Brown includes a link to his Fundly page, an online crowdfunding site on his videos. “The money people donate is going toward food, shelter, utilities; the basic things that we work jobs for,” he says.

The first quarantine cocktail is the old fashioned, a classic whiskey staple every bartender should know. In this segment, Gibbons-Brown lovingly clutches a package of toilet paper and playfully shakes up some simple syrup. Upon an audience request, the second episode teaches you how to make your own margarita. “So there’s two hunters in the woods right and they brought a thermos full of margarita with them…” he begins to joke at the end of the video.

When talking about his eccentric style behind Mama Roux’s bar and his makeshift one, “I guess the main difference is that when I get to write a script in advance I'm funnier,” he jokes. “But one of the most important things I've learned from some of my mentors in bartending was how to just let myself be myself behind the bar.”

If you’re interested in setting up your own home bar, Gibbons-Brown suggests you have some whiskey, gin, rum, tequila, and bottles of sweet and dry vermouth at hand. “You can make good drinks for yourself without necessarily having all the fancy bartender equipment.” The one item he believes is well advised to splurge on is ice molds for one-inch to two-inch ice cubes, much larger than your average freezer ice. “In terms of making the drink, you'll get a better result and more control in both stirring and shaking with one inch cubes than you will get with freezer ice,” he says. “When drinking the cocktails, the larger ice gives you greater control over the dilution lifetime and also, aesthetically, it raises the bar.”

In light of the state’s extended social distancing order through April, Gibbons-Brown and Fisher are going to keep making videos until the state’s isolation mandate is finally over. The two have a total of 10 episodes currently planned out, featuring the martini, daiquiri, and whiskey sour. “We're trying to keep it in the realm of accessible and relatively easy classic cocktails for the home bartender while also changing up the spirits.”

One way to relax your mind in this panic-induced anxiety-ridden time is to sit down and have a refreshing homemade cocktail (although it goes without saying this is not a bulletproof solution). At the end of the day, we should remember the hospitality and food industry workers we interacted with on a regular basis and support them however we can, whether it be tuning in to their videos or helping them out financially.

“The stakes for people like myself right now are very real,” says Gibbons-Brown.