A Quartet of Jazz Legends 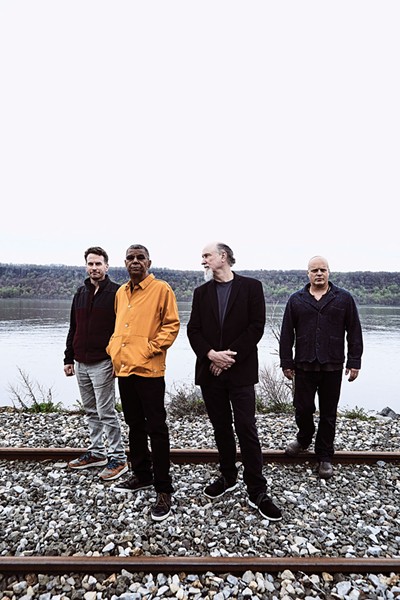 The terrain creeps up on you. Unfolding, unfolding, unfolding, until, before you realize just how you got there, you’re deep, deep, deep inside it. It feels infinite, and intimate. And still it draws you farther in, down into its darkened hollows, between its prickly barbs. It drags you across the coarse faces of craggy cliffs. It shoots you straight up into the boundless sky, to soar above the slicing peaks of breathtaking mountains, before dropping you back to Earth and enveloping you in sheer silence. Snaking through this lush panorama, feeding life to everything it touches along its route, is the main artery, the pulsing rhythm—the river.

Our own Hudson Valley. Or is it the music of Hudson, a super group comprised of four of the jazz legends who call the region home? Both. The latter mirrors the former.

“Looking out the window at the mountains and the woods while we were recording [the quartet’s self-titled debut] at NRS Studios in Catskill certainly affected the music,” says drummer Jack DeJohnette, who formed the band with bassist Larry Grenadier, keyboardist John Medeski, and guitarist John Scofield to celebrate his turning 75 this year. “And with all of us living here and the area having such a long tradition of great music, we wanted to kind of pay tribute to that.”

Besides the abstract aspect of the album’s environment-evoking instrumental tributes (check the free-range funk of the title track), Hudson has some more obvious local lionizations. Its string of Woodstock-associated rock songs—Bob Dylan’s “Lay Lady Lay” and “A Hard Rain’s A-Gonna Fall,” Jimi Hendrix’s “Wait Until Tomorrow,” Joni Mitchell’s “Woodstock,” and the Band’s “Up on Cripple Creek”—sees the four jazzmen acknowledging their rock influences while reinterpreting some timeless tunes connected with their beloved home turf.

The nine-minute-fifteen-second “Hard Rain” is perhaps the standout of the five covers; atop DeJohnette and Grenadier’s nervous rhythm, Scofield pulls its plaintive melody into atonal parts unknown while Medeski douses the bubbling cauldron with unsettling sci-fi sonics. Amid the originals there’s the gospel piece “Dirty Ground,” a Bruce Hornsby cowrite featuring a rare DeJohnette vocal. “That one is dedicated to Levon Helm and the survivors of Hurricane Katrina,” says the drummer. “And the studio that the album itself was recorded in is actually a house, which is something reminiscent of Big Pink [the Saugerties house where Dylan and the Band cut parts of The Basement Tapes and that inspired the title of latter’s Music from Big Pink].” In another tip of the hat to Hudson’s local lineage, Medeski’s position in the group reprises the role of their namesake Garth Hudson’s in the Band: that of the secret weapon who tastefully shades the songs with texture and color.

The Chicago-born DeJohnette, a Woodstock resident since the early 1970s, is, arguably, the most influential living drummer in jazz. A key component of Miles Davis’s “electric” band, he appears on the trumpeter’s groundbreaking 1970 album Bitches Brew and its follow-ups, 1971’s Live Evil and Jack Johnson and 1972’s On the Corner. Prior to joining Davis’s group, he’d been a member of the Charles Lloyd Quartet and worked with Sun Ra, Jackie McLean, Bill Evans, Stan Getz, and others. Since leaving Davis in 1972, he’s led his own bands and played alongside his former Davis bandmate Dave Holland and the recently departed John Abercrombie in Gateway; in former Lloyd cohort Keith Jarrett’s trio; and with Pat Metheny, Bill Frisell, and dozens more jazz giants.

Although the members of Hudson had collaborated in different settings previously, it wasn’t until the occasion of the 2014 Woodstock Jazz Festival that the four of them found themselves on stage together—along with an instant, supernatural rapport. “No matter how great the musicians might be, there isn’t always that chemistry there,” explains Medeski, who’s well known for being one third of out-jazz/funk greats Medeski Martin & Wood. “But this band absolutely has it. Everybody really listens. It’s not about any one person showing off. The music just feels really natural, and there’s always a really good feeling in the air when we’re doing a gig.” Prior to cofounding MM&W in 1991, Florida native Medeski studied under Dave Holland, arranger George Russell, and Albany pianist Lee Shaw and played with Mark Murphy, Dewey Redman, Jaco Pastorious, and numerous figures from New York’s downtown 1980s scene. A citizen of Saugerties since 2003, he’s also conscious of how the surroundings shape the sounds he and his Hudson bandmates make. “I spend a lot of time in the woods, and I’m sure that gets woven into the music,” the keyboardist says. “There’s so much history here, there’s an ancient power that we all thrive on. It’s something that’s hard to put into words, so we put it into music. That’s our language.”

“It’s the space in the music that’s most reflective of the area, I think,” says Grenadier. “All of us have a really good understanding of space. And as musicians who made our names in New York and then left it, space is what all of us were looking for when we moved here.” Grenadier is, like DeJohnette, a Getz alum. The longtime bassist of both the Pat Metheny and Brad Mehldau trios, he was raised in San Francisco, where he was moved to pick up the upright when, at the age of 12, he caught a performance by the great bass man Ray Brown. Captivated by “the subtlety and the physicality of the instrument,” he went on to work with such icons as Joe Henderson, Betty Carter, and Anita O’ Day. He and his wife, singer-songwriter and activist Rebecca Martin, have lived in Kingston since 2002. “Pretty quickly after [the couple] got here, we met a lot of other cats who, besides also playing music, were interested in a lot of the same issues we were, like the anti-fracking movement. I play a lot of local benefits, which is something that Jack and the two Johns have also done since before we put the band together.”

John Scofield, another former Miles man (he was with Davis from 1983 to 1985), first played with DeJohnette in 1978 and recently worked with him in Trio Beyond. Originally from Ohio, the guitarist is revered for his funk leanings and mildly distorted, rock-inflected guitar sound and recorded and performed with Gerry Mulligan, Chet Baker, Charles Mingus, and the Billy Cobham/George Duke Band before launching his own trio in 1979. Since leaving Davis he’s led bands that included Joe Lovano and Bill Frisell and has been a frequent collaborator of Medeski Martin & Wood. “Along with being directly inspired by the [1960s]era, when all the music—rock, jazz, folk, classical, world music—was coming together, there’s another thing we all share,” says Scofield, who’s been in Katonah with his family for 24 years. “And that’s the way that we bring the urban elements of our backgrounds as former New York musicians to what we get from being in a more rural setting. These days, we like living in nature instead of living on 34th Street or wherever. So, yeah, that vibe of the land and the trees and the river is in the music, subconsciously. But so is the city vibe, which comes from us.”

After a 2016 inaugural tour supporting Hudson outside the Hudson Valley, the band is excited to at last play their first official “hometown” concert this month. And, working around each of the members’ busy schedules outside the project, they look forward collectively to the promise of new recordings and performances in the years to come.

“I’m very glad I’m still able to play, and I’ve been blessed with a really rich career,” says senior statesman DeJohnette. “Everybody in the band loves what they do passionately. For us, the music is always great because it’s different every time we play it.”

Hudson will perform at the Bardavon in Poughkeepsie on October 4 at 8pm. Hudson is out now on Motema Records and available at Jackdejohnette.com.

The original print version of this article was titled:
"Environmental Impact"