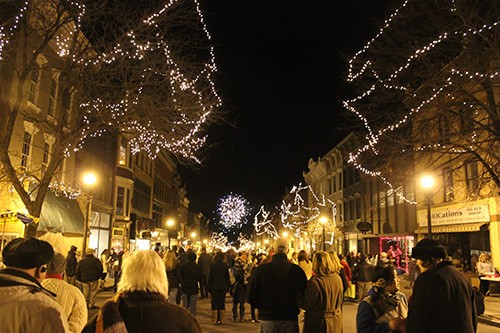 Held on the first Saturday in December, Hudson's Winter Walk is a holiday in and of itself for those who attend the annual event, which ranges from Columbia County residents to people as far afield as Boston and New York City. Hudson's main mile-long street is transformed into a festive thoroughfare, with decorative storefronts, horse-drawn wagon rides, stilt walkers and marionettes, bagpipers, and live reindeer. Familiar characters joining the walk include Frosty the Snowman, Scrooge, a Tin Soldier, and angels, snowflakes, and elves of all sizes. Sax-O-Clause provides music at the 400 block, and dancers range from belly and can-can to ballet and hip hop. Street vendors offer eat-as-you-go food and many restaurants provide heated outdoor dining areas. As if that weren't enough, Mr. and Mrs. Claus give out free gifts in the City Hall and fireworks launch at 8pm from Promenade Hill, visible from most places on Warren Street.

Hudson has become a destination-spot for food lovers of the Hudson Valley and beyond. From Crimson Sparrow's molecular cuisine to Fatty Crab-king Zac Pelaccio's soon-to-open restaurant, Fish and Game, new eateries are sprouting up at a rapid pace in Hudson's happening downtown area. This annual event offers a chance to try samples from the food mecca's finest restaurants and cafés, including appetizers, entrées, gourmet coffees and teas, cheeses, ethnic cuisine, baked goods, and soups from the rookies as well as the veterans, like Vico and Café Le Perche. BeLo3rd sponsors the September event between Warren Street's 200 and 300 blocks in conjunction with the Gallery Stroll that follows.

The July festival features three days of folk music and dance at the foot of the Berkshires, at Hillsdale's Dodds Farm. The spectrum of styles featured at the festival ranges from classic and folk-pop to fringe-genres like bluegrass and polka. Past festivals have featured legends like Arlo Guthrie and Richie Havens to up-and-coming artists like Dar Williams and Eilen Jewell. Headline acts perform on the Main Stage, including a songwriter swap on Friday night, and smaller-scale performances take place on the Workshop and Family stages. The Dance Tent features group and partnered dance styles, including contra, swing, square, and zydeco with live music accompaniment.

The small town of Chatham hosts world-class national, international, and local films for five days each October. This year, over 30 pre-released films were screened, including full-length and short form works ranging from controversial to entertaining. Festival highlights include a panel discussion with Director Alex Gibney after the screening of his documentary Mea Maxima Culpa: Silence in the House of God, the first ever Screenwriting Lab offering a space for script-reading and workshopping, and a screening of Ticket to Paradise as part of an exchange program with the Havana Film Festival. The films play at Crandell Theatre and the Morris and Tracy memorial halls in downtown Chatham, including a free Saturday morning children's program.

The annual end of summer fair got its start in 1840 as a way to improve the condition of agriculture, horticulture, and the domestic economy. More than a century and a half later, the fair continues to honor its original goals with domestic arts and crafts exhibits, live animal shows, fruit and vegetable competitions, and special exhibits devoted to the regional bounty and heritage. The fair boasts traditional offerings, like rides, live music, and food vendors, with some more extreme features, like bull riding and demolition derbies. If it's a family excursion, check out the educational children's activities and Schoolgirl Queen pageant instead.