How to Manage Your Girlfriend’s White Guilt: An Excerpt 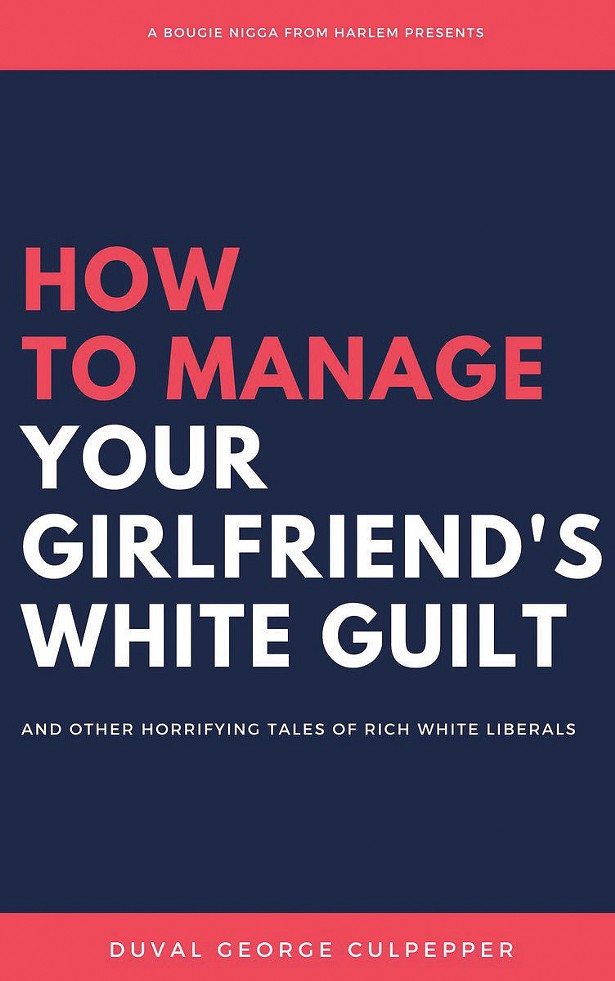 A native of Harlem, Duval Culpepper now makes his home in the Hudson Valley, performing at comedy clubs across the country and attempting to convince people that Wild Wild West is a superior film to Django Unchained. The following essay is from How to Manage Your Girlfriend's White Guilt: And Other Horrifying Tales of Rich White Liberals (Forest Complex 88 Publishing). This is Culpepper's first book.

Leslie is from Chapel Hill, North Carolina. She's the kind of girl who'd attended an actual debutante ball growing up ("just for show," she insisted). After graduating from Brown and spending a year abroad volunteering in a rural community in Nicaragua that would probably have been fine without her help, she moved to New York City to teach public school.

After chatting on OkCupid for a week or so, we've decided to meet up at a bar and see if our real-life banter can match the witty potency of its digital equivalent. So far, it translates. She's beautiful, a brunette. We've been riding that good-first-date high for 20 minutes or so when, emboldened, I take Leslie's hands in my own. She quickly snatches them back, eyes averted.

"I'm sorry..." I say, having apparently crossed some line I couldn't perceive.

"No, it's not you. I just have"—she says as her hands fall to her thighs and she rubs them against her dress—"sweaty palms. It's a thing."

"You ruined a perfectly good romantic moment because of sweaty palms?" I howl, both of us now laughing. "Give me those," I demand with a grin, reaching underneath the table to feel what, I now realize, are in fact some very moist mitts. But the mood is reset. We're in tune with one another again.

"So, what do you do for work?" I ask, pulling back instinctively to just hold the tips of her fingers.

"Teaching, mostly," she says. "Seventh grade English. But I also help them with their internalized racism."

At this, I release her fingers. "Their what?" I ask, now going for my deconstructed tequila sunrise.

"Oh like, you know, like if a black person straightens their hair it's because they have issues of self-loathing and resent their culture," she says with an eerily cheerful smile. (And all this time I thought I did that in high school to look like Lando Calrissian.)

I take a deep breath. I grew up around black women who straightened their hair. They seemed happy when they were doing it. I remember the way they used to bond while performing this ritual before going out to catch a long-forgotten R&B act play in a part of the city not even the gentrifiers would dare explore. Or the way my little sister would perch on the couch watching The Mummy Returns on AMC while my mother stood behind her with a flatiron, getting her ready for Thanksgiving supper. The "hair debate" was new to me—my family of very black people never seemed to have any issues with it. It seemed to be just college-educated white kids who did.

"What about when you vacation in Barbados and pay one of the natives to spin those locks of yours into a braid?" I probe. "Is that internalized racism?"

"That's a little different," she says.

Leslie squirms like the replicant in the beginning of Blade Runner being asked about the turtle flipped on its back, and I realize the more I prolong this line of questioning, the likelier it is that I'll be jerking off this evening, so, at the expense of intellectual inquiry, I let it go.

"So, how do you get along with your students?" I ask.

"Well, you know, they can be...challenging...at times," she says, the skin beneath her left eye contorting viciously. "But they're good kids."

"Where do you teach again?" I ask.

"Off the Grand Concourse," she says.

"God damn. Do you carry a 9mm in your purse?" I say with an inflection that involuntarily recalls the great Garrett Morris.

"That's really offensive," she replies, brushing a few locks of hair behind her ear.

"No, it's not. That's a fucking horrible neighborhood."

"You don't know what it's like for my kids."

"Leslie, I grew up four blocks away from where you teach."

"Well, but..." she starts. I can feel her trying to make sense of me. "You're different. You probably went to private school," she says desperately.

I give my lower lip what I hope appears to be a flirtatious bite in an attempt to keep my face from fully telegraphing my ire. It's been a while since I've been out with someone who shares my love of that Netflix show with Idris Elba in it, and I'm tired of watching it alone. I consider changing the subject, but isn't this the point of dating someone from an Ivy League school? Spirited debate?

"And that disqualifies me from commenting on my own race?"

I'm looking at her, studying the way her idealistic conviction seems to be coming into conflict with her proprietary southernness and her attraction to me. I feel a little bad, to be honest, but I'm tired of dealing with these wildly slanted perceptions. After a pregnant pause of a good 10 seconds, she speaks again.

"No, I mean, but don't you agree that white patriarchy makes it practically impossible for at-risk youth to succeed in our country?" she asks hopefully.

She flinches a bit. "You don't think the odds are stacked against minorities in this country?" she offers quietly.

"Of course," I say slowly. "But I just think it's more constructive to focus on the positive things the black community has at its disposal rather than perpetuate a compounding-victim narrative that makes a group of people think they're doomed before they even try to achieve success."

This date-turned-Senate-hearing drags on, and in spite of how painfully awkward it gets, Leslie never wavers or wants to change the subject. I respect her for this. Even I have my limits for social discomfort, though, and eventually, recognizing the need for some sort of peace offering, I flag down our waiter and order two shots of Maker's. The whiskey arrives and we reluctantly raise our glasses, both of us genuinely unsure whether we hate each other.

"I want to like you, Duval," she says in earnest.

Surprisingly, she invites me back to her place in Bed-Stuy, and I oblige her. When we arrive, her roommate is eating instant macaroni and cheese in the living room. She grimaces and says nothing. Leslie rolls her eyes at me, pours two glasses of water, and leads me into her bedroom, where we have a very adult conversation about STDs (we've both been tested and are clean). Then she asks me about my knowledge of essential oils. I nod at everything she says until we're both naked and having sex slathered in coconut oil. Afterward she suggests we check out Netflix.

"Well, other than being more racist than Trump..." I say, already starting to gather my belongings.

We date for another month and a half. I find I enjoy seeing how deeply I can offend someone's sensibilities while maintaining a level of mutual attraction. Several weeks into our relationship, she goes off to Boston to finish her PhD in political science at Harvard. The relationship wouldn't meet its formal death, however, until the weekend I visit from New York, fail to respond to her texts quickly enough, and I'm told I "should find somewhere else to sleep tonight."

And I do, crashing at an 80-degree angle in the driver's seat of my 1995 BMW 525i, clutching my bomber jacket for warmth as the rain falls in the parking lot behind the Harvard graduate student residences, hoping the Cambridge police cruiser sitting across the parking lot won't notice me. Late that night, twisting uncomfortably in my bucket seat, I find myself screaming out loud, "I thought you wanted to help my people get off the streets!"

The campus cop doesn't seem to notice a thing.