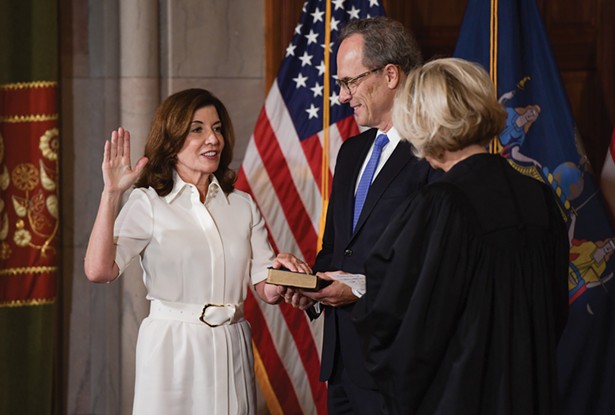 New Yorkers are eager to reap the benefits of legal weed, yet bureaucratic roadblocks have kept things in limbo since Albany legalized adult-use marijuana in April. The fall is pr﻿oving to be less of a buzzkill—on September 1, the Senate approved Gov. Kathy Hochul’s first two appointees to the Cannabis Control Board (CCB) and Office of Cannabis Management (OCM), a crucial step to realizing an economically viable and socially equitable legal market in the Empire State.


Cannabis advocate Christopher Alexander will serve as executive director of the OCM. Alexander helped craft the Marijuana Regulation and Taxation Act (MRTA) as former policy director of the Drug Policy Alliance. He currently works as the government relations and policy director at the cannabis company Village Brands, the largest black-owned and operated multi-state cannabis company in the country. The OCM will set the rules and regulations for growers and retailers in the cannabis space.

Former assembly member for Brooklyn’s 56th District, Tremaine Wright, an attorney, entrepreneur, small business owner, and activist, will chair the Cannabis Control Board (CCB). Wright is a second-generation Bed-Stuy resident devoted to reinvesting in communities hit hardest by the war on drugs. The CCB will be responsible for all aspects of cannabis, including the allocation of licenses, licensing regulations and requirements, and general oversight of the industry.

Beacon’s Smokers Mecca held its second “Free Joint Friday” community event on September 3, handing out free marijuana joints to customers age 21 and older. Around 400 people showed up for the first event on August 27. The event is reminiscent of another free giveaway earlier in the year at a Michigan dispensary, the Greenhouse, which offered pre-rolls for every customer with proof of vaccination. The “Pot for Shots” promotion was a joint effort with UBaked Cannabis Company, which provided the pre-rolls.

On September 9, Big Weed put down roots in Warwick. Green Thumb Industries—a major national cannabis firm worth $6.4 billion—started construction on its 450,000-square-foot cultivation and production hub, converting an abandoned prison site into what Warwick’s town supervisor Michael Sweeton calls “a cannabis cluster.” The former Mid-Orange Correctional Facility site was once home to about 1,000 inmates. When the prison closed in 2011, Warwick lost about 450 jobs. For the next decade, the compound was virtually empty, save for a youth athletic facility. Now, Green Thumb promises a robust stimulus to the pastoral Orange County town, with an influx of employment opportunities and future “canna-business.” The site will create at least 100 construction jobs and up to 175 permanent positions once the facility is operational.


“There is massive opportunity upwards, from salaried positions with supervisors, operational roles, all the way up to general managers,” says Green Thumb CEO Ben Kovler. “This is the time for people with passion and skills to learn it, and we can create a long-time career for folks.”

Kovler says Green Thumb plans to employ the formerly incarcerated, as other Green Thumb facilities have done. The yet-to-be-named cannabis facility aims to be fully operational by 2023. If all goes according to plan, Orange County farms and cultivation sites will contribute heavily to the projected $8.7 billion in sales by 2027, according to the nonprofit Marijuana Policy Project.