Farming for beer in the Hudson Valley.

Hops has a way of growing on people. In his five months as hop manager at Obercreek Farm in Hughsonville, Brad Nagle has "become obsessed with it."

"It's such an interesting plant," says Nagle, who had no hops or farm experience before he landed the job at Obercreek. "They're such fast growers, they're beautiful, and, of course, the end product is great."

The end product can also be very lucrative. Thanks to hop-friendly legislation, the growth of the local craft-beer industry and the obsession with all things farm-to-table, farmers can make more money growing hops than just about any other crop. The Hudson Valley now boasts at least 15 acres of hops, the small cone-shaped buds that determine a beer's flavor and aroma.

"It's really helping strengthen our economy," says Justin Riccobono, co-founder of Dutchess Hops in Lagrangeville and a consultant to other Hudson Valley hop startups. "We're saving farms and creating jobs, we're creating a locally produced craft beer, and we're creating a real interest in tourism. More and more people are coming here to tour the beer trail and the hop yards. The beer revenue is winding through the Hudson Valley."

Dried Hudson Valley hops commands between $12 and $18 a pound—compared to $7 to $13 for Pacific Northwest hops. "The revenue is there to make $20,000 per acre," Riccobono says. By comparison, corn yields revenue of about $800 an acre, and hay even less.

Responding to a wave of interest across the state, nonprofit groups are hosting workshops on hop growing, supplying hop plants and other materials, and providing costly harvesting and drying equipment. Next month, the Carey Institute for Global Good plans to launch a model farm brewery on its Rensselaerville campus to help aspiring brewers learn the trade and connect with local hop farmers.

Hops picks up flavor from the soil where it is grown just as the taste of wine grapes differs by region. The New York terroir is characterized by more citrus and spice than its West Coast counterparts, and Hudson Valley farmers are finding that local breweries and homebrewers will pay a premium for the taste and imprimatur. Dutchess Hops, for instance, has a signature hops called AlphAroma that goes for $15 a pound.

August and September are hop harvest season, a busy time for Riccobono and the other Hudson Valley farmers who have planted hops over the past few years.

Pennings Farm in Warwick added an acre of hops three years ago after seeing strong sales of its own hard apple cider and local craft beer and wine at the pub that the farm opened in 2010. "It's a natural progression to make our own beer," says co-owner Steve Pennings. Michael Antonelli, and his wife, Alva, planted an acre and a half of hops on their Walden farm to supplement their income when they retire. They hope to open a farm brewery.

A Growing Concern in New York

The state's 2012 farm brewery initiative allows craft breweries to sell beer by the glass in their tap rooms as long as 20 percent of their ingredients come from the state (rising to 60 percent in 2019 and 90 percent in 2024). As a result, there are now 58 licensed farm breweries in the state, the number of microbreweries has more than doubled to 103, and demand for local hops has surged, along with a thirst for information.

In 1880, New York State was the largest producer of hops in the country with 40,000 acres, mostly between Syracuse and Cooperstown. A mildew epidemic, followed by Prohibition, put the kibosh on the industry. The Pacific Northwest—Washington, Oregon, and Idaho—emerged as the leader in hop production and currently corners 98 percent of the market. But New York is resurging, with some 250 acres under cultivation—up from just 15 four years ago—making it the fifth-largest hop producer in the nation, according to the Hop Growers of America. Today, hop farms are spread out across New York State. While hop yards of 100 acres or more are common in the Pacific Northwest, few New York State growers have more than 10 acres. In the Hudson Valley, Dutchess Hops, at four acres, is the largest operation.

"The amount of hops acreage in the state is probably going to double every year," says Samuel Filler, liaison to the beer, wine, and cider industry for Empire State Development, New York's chief economic-development agency. 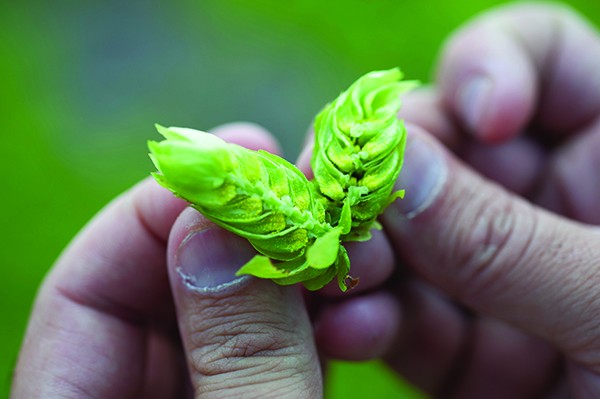 Local brewers are snapping up Hudson Valley hops. From the Ground Brewery, a new business that rents space in a building on Migliorelli Farm in Tivoli (which grows barley but not hops), has agreed to buy all the hops produced by Germantown Beer Farm's one-acre hop yard. In Wappingers Falls, North River Hops and Brewing, which celebrated its grand opening last month, recently bought 40 pounds of Obercreek Farm's wet hops. North River will use it to create a double IPA for Dutchess Hops' Hoptember Harvestfest. Jamie Bishop, brewmaster at Mill House Brewing Company in Poughkeepsie, plans to use Dutchess Hops' AlphAroma in a wet-hop ale. "It's like a sushi-grade hops," says Bishop. "The day they pick it is hopefully the day it goes into my kettle."

In line with the Valley's emphasis on healthy eating and farming, most hop growers here are using organic methods. "My philosophy is a healthy hop plant can fight off diseases and pests," says Dennis Nesel, co-owner of Germantown Beer Farm with his wife, Jeanette. "Also, I don't know anything about sprays or chemicals, and I don't want any of that stuff in my beer."

Nesel, a Merrill Lynch financial adviser who farms his acre of hops on weekends and days off, keeps two horses on his 17-acre spread and swears by manure as fertilizer. He prunes his hop plants regularly to maximize air circulation and ward off fungus, and uses grass clipping to control weeds. Nesel got his plants from the Cornell University Cooperative Extension, which supplies farmers with disease-free plants. Today's hop plants are much more resistant to disease than those of a century ago, and pest-management techniques are much more sophisticated.

Since hops flourished in the state at one time, it's clear that conditions here are conducive for a comeback. "I get dozens and dozens of phone calls and emails on a daily basis from growers and perspective growers," says Steve Miller, hop specialist for the Cornell Cooperative Extension. Miller holds workshops in farmers' fields every summer that draw at least 100 attendees, while Cornell's hop conference last December hosted 350.

Hop crops take three or four years to fully mature, but farmers say it's worth the wait because the potential for return on investment is so strong. At a minimum of $12,000 an acre, the upfront investment is also substantial. Hop plants grow up to 20 feet high and need to be strung on trellises secured to tall poles for proper aeration. "They start shooting up in April, and by harvest time, they're 18 feet high," says Nagle. They also need a consistent water supply, regular pruning, and monitoring for pests. Fortunately, they are perennials, with a life span of up to 20 years.

Each hop plant produces hundreds of cones, and handpicking takes roughly an hour per plant. Yet mechanical harvesters start at about $10,000, and hop pelletizers run even higher. Big breweries prefer pelletized hops, which has a longer shelf life than dried hops and is stored in a more compact form. Even the kilns used to dry hops, called oasts, cost around $2,500.

Equipment-sharing arrangements are emerging. The Northeast Hop Alliance, a growers association, and the nonprofit Center for Agricultural Development and Entrepreneurship (CADE) both have a harvester available for farmers to rent, and CADE helped six farmers get grants to buy oasts. Riccobono rents a small, mobile harvester from the University of Vermont and plans to offer a similar service through his cooperative, Hudson Valley Hops. Steve Pennings recently bought a harvester that he plans to rent to other farmers in the area.

For now, most Hudson Valley hop farmers are harvesting by hand and hoping all that effort will pay off. "All you have to do is pick them by hand for two hours, and you're definitely wishing you had a harvester," says Nesel, who enlisted his wife, his daughter, his son, and his nephew to help with the picking.

Despite the leeway in the farm brewery law, Plan Bee Farm Brewery in Fishkill already uses 100 percent New York State ingredients in its beer, including the fruits from its quarter acre of hops. From the Ground Brewery plans to source its ingredients from an even tighter circle of suppliers and will get a boost once Germantown Beer Farm opens its new malting facility. 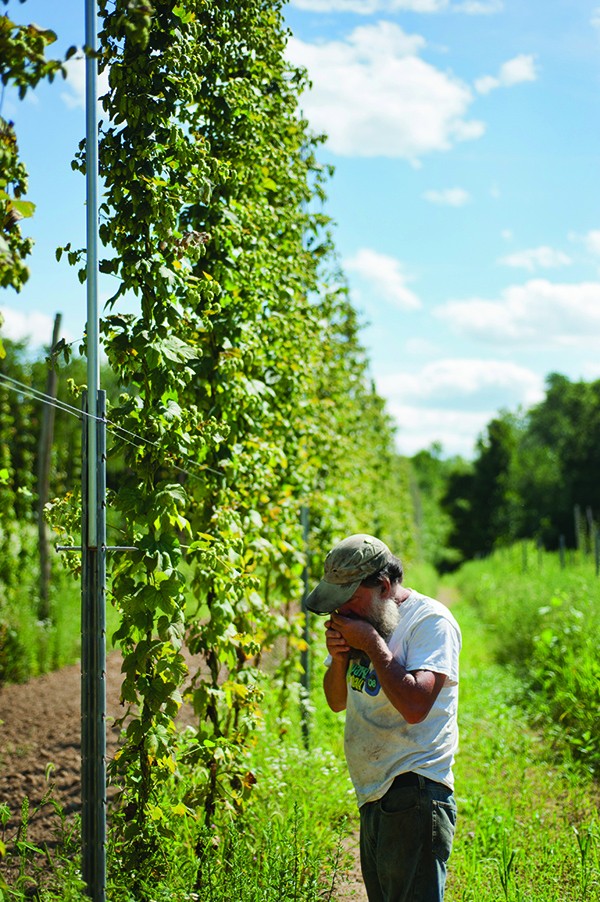 "I'm located on a farm growing barley five minutes from a hop farm, and the hop farmer is opening up a malting facility," says From the Ground owner Jakob Cirell. "We will be able to produce a beer in which all the ingredients, aside from the yeast, have never left a five-mile radius of the brewery."

Plenty of people are excited about Hudson Valley beer. Riccobono expects 1,000 attendees at the Hoptember Harvestfest, up from 600 last year, along with 26 Hudson Valley microbreweries, distilleries, and cideries. The event is on September 13 at Eastern View Farm in Lagrangeville from 1 to 5pm. Tickets include unlimited tastings and hop-infused food, including hop-smoked BBQ from Bacon Brothers in Canton and bratwurst with hop stuffing from Tomas Tapas Bar in Wappingers Falls. For more information and tickets: Dutchesshops.com/event-tickets.