Homeward Bound: The Friend-Finding Mission of Lost Pets of the Hudson Valley

July 02, 2019
Last Updated: 07/02/2019 11:15 am
comment
There's nothing sweeter than the bond between humans and the critters we keep company with, and few things as upsetting as having a beloved pet go missing. Here in the Hudson Valley, an army dedicated to helping reunite wayward fur-folk with their humans just celebrated its seventh anniversary — and is nearly 60,000 strong.

The Lost Pets of the Hudson Valley community unofficially began in 2012. Lifelong Kingstonian Bentley Potter was driving through Woodstock when he happened to see one of those heart-achy "Have You Seen This Dog?" flyers posted at the side of the road. Then, Potter thought, "wouldn’t it be good if that could be on social media?"

For a lot of people, it might have stopped there. But Potter, a landscape and real estate photographer whose dream has always been to create and live in a large cage-free dog refuge, started a Facebook page when he saw there wasn’t one dedicated to the neighborhood.

“Hey, friends!” he posted on June 23, 2012. “I’ve created a page that I am hoping will help anyone who has lost a pet or has found a pet in the Hudson Valley. By using this page to post information and photos of their lost pet, maybe we can increase the chance that they are reunited with their respective families. Please share...Thank you!”

The post drew six comments and a share. “When I first made it public, I remember begging my friends and family to share it over and over,” he says. “But after six or seven months, it just took off.”

Today, Lost Pets of the Hudson Valley has nearly 60,000 members and has reunited thousands of pets — mostly cats and dogs, but the occasional goat or ferret — with the humans who love them. 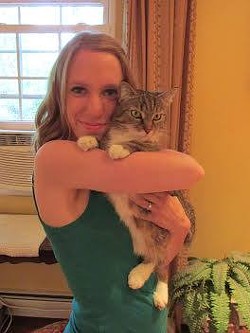 “I didn’t really know it would work, but it has and it’s awesome,” Potter says. “Every day we get a happy ending, often two or three. It’s gotten difficult to fully keep track, but I’d say we get a reunion about half the time “

The longest saga he’s ever seen end with a joyous reunion was that of a dog missing for 22 months who turned out to have traveled to near Middletown from the Binghamton area; the fastest reunions happen in under an hour. Many feel miraculous, like the tiny pug from Pawling who went missing in midwinter.

“The weather was about 10 degrees during the day and below zero at night that week,” recalls Potter, “and this was a little dog, like less than ten pounds. It had been eight days of no sightings and his people were losing hope. Then somebody called and said they’d just seen the flyer and they’d seen the dog in a field. The family went there and got out of their car and called him, and the dog ran out of the woods and jumped into the car as if nothing had happened. You’re never numb to the reunions. But I’m no longer shocked that it’s working. It happens a lot, which is great."

As the page has grown, Bentley has gathered a core group of eight volunteers who cover it in shifts, making sure each lost or found pet is publicized and every tip relayed immediately; as in any rescue operation, time is of the essence.

“You’re never numb to the reunions. But I’m no longer shocked that it’s working. It happens a lot, which is great." tweet this
“It’s a true community effort,” Potter says. “A lot of these people don’t know each other or the pets, but they share, and then it becomes ‘hey, that’s on my way, I’ll look.’ We get a lot of superfans on every post and every case, and without them and the volunteers it wouldn’t work. We’re all on the same page, literally and figuratively; we’re all there because we have and love pets and know that we can come together as an army to help them.”

Sharing a post, Potter points out, requires but a second’s effort and can be done from anywhere—yet the results can make a huge difference to a family and its MIA furry member. People have suggested to him that he expand the range, but he believes being hyperlocal is key to success.

“I don’t want it to become too vast, like ‘Lost Pets of the Northeast,” he says. “I want people to see a post and think 'hey, that’s not far, I’ll keep my eyes open.'”

if you’d like to become part of the best thing on the internet, just reach out.

“We’re always looking for people to help out if you’d like to be part of something that feels just awesome,” says Potter. “New volunteers get hooked as soon as they see their first reunion happen. There are some rough stories and sad endings, but we’re all there for one another and the success stories make it all worthwhile.”