Ann Nickinson and her partner, Lisa Hall, are restaurant industry veterans with two successful outlets in Manhattan. They opened their first incarnation of Kitchenette in TriBeCa just as the neighborhood was becoming chic, serving home-cooked comfort food before it became trendy. "Food is like fashion, and things change. But a grey flannel suit is always in good taste," says Nickinson. "Chicken pot pie and meatloaf and mashed potatoes were popular 50 years ago; in another 50 years, they will still be popular." Nickinson is self-taught and has loved to cook since she was very young. Hall is a native New Yorker who attended the French Culinary Institute and later lived and worked in Paris. The partners share a love for simple American classics, prepared with the best possible ingredients. It seems clear, listening to Nickinson talk about Kitchenette, that for her and Hall it is a labor of love.

The two have just opened the third branch of Kitchenette here in the Hudson Valley, in the location of the former High Falls Cafe. The Kitchenette outpost in High Falls offers the same menu that Manhattanites have enjoyed for the past 20 years. "We've built our reputation on the kind of food that grandma might serve," says Nickinson, "and we make everything—our pickles, our breads, our baked goods—there's nothing that we don't make." 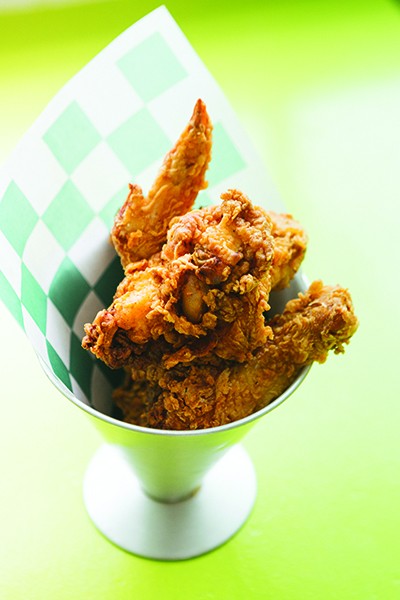 On a recent trip to Kitchenette, deciding upon an entree from the dinner menu was not easy. I was tempted by the Crispy Buttermilk Fried Chicken, served with Macaroni and Cheese ($17) and the Fish and Chips, served with homemade tartar sauce ($15). I settled on the Fried Green Tomatoes with Cornmeal Crust and Homemade Ranch Dressing ($6) to start. Sautéed—not deep fried—I was advised, these arrived piping hot and crispy from the skillet. To follow, I chose the Chatham Cod Cakes ($17), which were simultaneously hearty and light, served with sweet potato fries and delicious cole slaw. My companion ordered the Steak Frites ($22), which arrived at a perfect medium-rare, sliced (a nice gesture—cutting a big hunk of steak is so overrated) and topped with a flavorful chimichurri sauce. The frites were hand-cut and fried to perfection. But the pièce de résistance was dessert. All of the baked goods, from the red velvet cupcakes to the mini-pies and cheesecakes, looked absolutely scrumptious perched in their glass display. Our choice, the crème brûlée, was nearly flawless (and it's surprising how often, even in the fanciest places, you get scrambled eggs)—rich, creamy, perfectly set and capped with a thin shell of caramelized sugar.

Other highlights of the dinner menu include Grilled Mustard Crust Boneless Pork Chop topped with onion jam, served with corn pudding ($18.50), Tuscan Salmon roasted with lemons, Kalamata olives, and rosemary served with panzanella salad ($19.50), and KMC (Kitchenette's macaroni and cheese) with smoked mozzarella ($13). The roster is headlined by the Kitchenette Specialty—turkey meatloaf served with mashed potatoes and gravy ($16). The lunch menu features many of these same comforting classics, as well as a broad selection of burgers, including something for vegetarians: a Vegan Lentil Quinoa Burger with carrots, spinach, and roast garlic topped with red pepper puree ($11). One could enjoy three meals a day at Kitchenette, which also offers a complete breakfast menu.

"As much as we can, we try to source ingredients, meats and produce, locally." Says Nickinson. "It can be challenging, because it's cost-prohibitive to do that exclusively. We consciously make an effort, as much as we can. We have some customers who really care, not just that it's local, but exactly where it came from. I would have thought that would be more of a city thing, but it's actually not. We use Hudson Valley Milk and Feather Ridge eggs and John Fazio meats. We go to all the markets to buy vegetables when they're in season. Lisa and I are both part of this community—we've been a part of it as weekenders for a long time—and I want to support the local economy as much as possible."

Nickinson and Hall undertook a complete renovation of the space, and walking in to Kitchenette, it's a little difficult to remember the old High Falls Cafe. "We started renovating on January 1—it was a much bigger job than we had anticipated, but that's always the case. It's an old building, and it had fallen into disrepair. The biggest thing was the kitchen—it had to be gutted down to the studs. That was a huge undertaking, and we had to put in a new ventilation system. One of the good things about having restaurants in Manhattan is that you have a lot of experience—everything is very stringent there, especially when it comes to health codes—they don't fool around. And we've taken that approach—we run this place like it would be inspected in Manhattan." Vying for your attention at the center of the main dining room are a full bar and an enticing glass bakery display, with the attractive, smiling young staff buzzing about. There is additional seating in a second dining room, as well as a third space that's reserved for special events. The exterior has been whitewashed, and all is bright and cheerful inside, with old-time accents that call to mind a farmhouse kitchen. All of the beverages are served in mason jars, which are also employed to deliver the check.

This is not Nickinson's first foray into the restaurant business in High Falls. Over 20 years ago, she opened Good Enough to Eat, which was in operation for five years, in a location just up the road where the Northern Spy occupied for many years. "That was a difficult time for the economy up here —IBM closed and it had a major ripple effect throughout the economy. So I did have a little post-traumatic stress about re-opening up here. But I think this is really the right time," says Nickinson. "And I love this town. A lot of places have closed and I'm hoping to see more places open. I think competition is a good thing, people like choices. If your going to buy a house here, you want to have amenities and choices."

The area around High Falls and Stone Ridge, framed to the east and west by the Shawangunk Ridge and the Catskills and anchored by the Mohonk Preserve, is especially attractive to seasonal residents from New York City. "I think our customer base is about 50/50, year-round folks versus those who come up from the city seasonally," says Nickinson. "We're fortunate that there are a lot of people up here who know us from the City, so we have a little base to build from. Even when I moved back to the city, I always had a house up here. Lisa and I decided that we really wanted to break into the catering and events up here, that was really our biggest importance. But when we were able to get this space, it really lent itself to all the avenues that we wanted to take."

Like its neighbor across the road, The Eggs Nest, which owners Richard and Gillian Murphy first opened in 1973, High Falls Kitchenette features the sort of menu that has something for everyone and a comfortable, friendly atmosphere equally suited to a first-date or a night out with the kids. Maybe it's the home-cooked comfort food, or the level of professionalism that reflects over 20 years experience running restaurants in New York City, but Kitchenette already feels like a reliable old stand by.