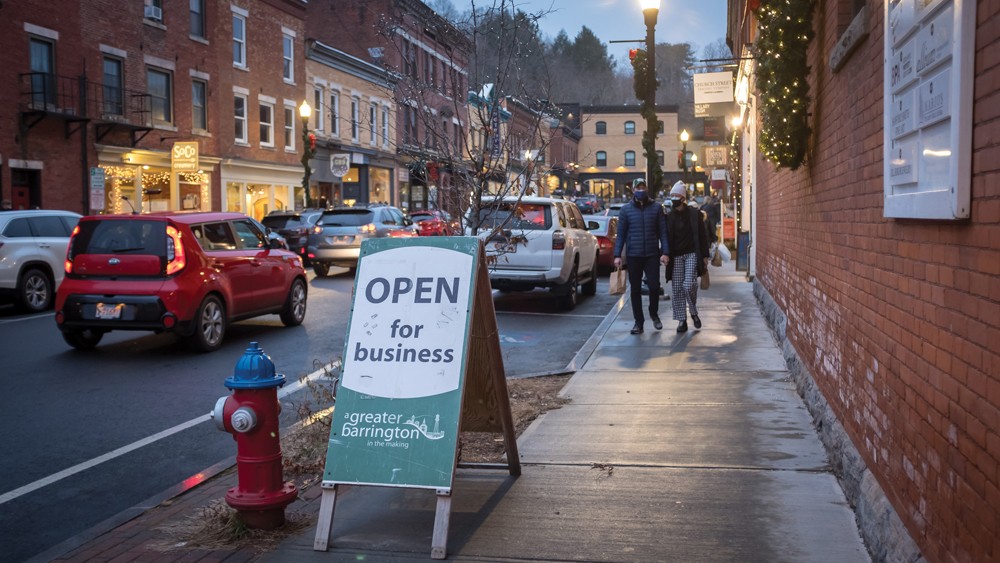 This year—here, there, and everywhere—was really, really bad, but in Great Barrington a surprising sentiment endures: optimism. "We want the Berkshires to remain the Berkshires," says Betsy Andrus, executive director of the Southern Berkshires Chamber of Commerce. "The key thing now is getting people to understand that shopping local isn't just a phrase. It's hugely important. You need to invest, eat, shop, and donate if you want to keep the character of your community intact."

While every business sector has been impacted in Great Barrington, Andrus points to some areas of the local economy that have been able to grow during the crisis. Farms and farm stands saw increased patronage throughout their seasons and the recreational marijuana industry continues to flourish. But the biggest indicator that the town and surrounding area may be well positioned to recover gracefully after the pandemic is the current real estate boom.

"The Southern Berkshires is red hot," says real estate agent George Cain of William Pitt Sotheby's. "Anything that comes on the market that's halfway decent goes in a minute, and everyone's got three buyers." According to Cain, three years ago there might be 150 houses over $1 million sitting on the market at any given time. Now there's so much buying that inventory is down 40 percent, making it an unparalleled time to sell. Homes are selling the day they list, often without the buyers even seeing the property in person. Cain says the self-evident cause for all this is New Yorkers who are coming from small, expensive apartments in the city. "When they see what they can get up here for the same, or often less money, it becomes an easy decision," says Cain.


Cain estimated the metropolitan migration to the Berkshires is a 70/30 split between New York City and Boston respectively, adding that it will likely be much more significant than the movement seen out of the city after 9/11, as working remotely allows new residents to live farther from cities than before. "I think it will take at least five years for Manhattan to claw back to where it was before COVID," Cain speculates. "But I'm worried about the Berkshires too. The cultural attractions, the restaurant and bar business, which has been so affected, are a driver for the region, and all the retailers feed off that. Yes, it's been a banner year for real estate, but I'm worried about 2021. Ultimately the Berkshires will come back."

The Box Office Is Closed

The historic Mahaiwe Theater brought on a new executive director in 2020. Janis Martin assumed her post on January 1 of last year and has since had to navigate the closing of the theater and how to provide programming to patrons remotely. Despite the suboptimal timing of her appointment, Martin doesn't complain—in fact, she's stirringly positive about the lessons learned and the new skills the organization has picked up during lockdown. "There's no question this is a challenging time for organizations that are about gathering," Martin says. "We are fortunate to be in the Berkshires, surrounded by cultural institutions that are brilliantly led and a community that cares deeply for the arts. I have great optimism that we will survive this challenge, but we are going to be in recovery for a while."


There is a lot of local concern about the vitality of not just the Mahaiwe but all the arts institutions in Great Barrington and throughout the Southern Berkshires. Not far from here, in neighboring Becket, world renowned dance center Jacobs Pillow canceled their entire season then, in November, one of their two barn theaters burned to the ground, salting a wounded year. "We all didn't just lose a season," Martin says. "We lost art. Art, especially performance, exists in a moment in time and this time has been lost."

Resolute through setbacks, Martin says COVID has presented an opportunity to strengthen the Mahaiwe on a number of fronts, from infrastructure to outreach. Fifty percent of the Mahaiwe's operating costs are paid for by ticket sales, and they lost 90 percent of that income in 2020. Thankfully, their donor community has been generous.

One new quarantine program run by the theater this season was erecting a drive-in movie theater on the Simon's Rock campus. The series of screenings attracted about 2,000 people, Martin says. They aimed to appeal to all members of the stir-crazy community, projecting blockbusters as well as documentaries in collaboration with the Berkshire Film Festival, and even screened Spanish language films in partnership with Volunteers in Medicine. Martin says they are thinking about keeping the drive-in program going next summer, whether or not there's a global catastrophe.

The Mahaiwe has also been curating an impressive amount of online content, filming concerts in the hall and broadcasting them on the website, along with additional content like Metropolitan Opera performances, preceded by informative and enlightening lectures by composer Scott Eyerly.

With the stress caused by the pandemic, all can be forgiven for needing a responsible amount of self medication. Theory Wellness has been selling legal weed in Great Barrington for a few years now on the outskirts of town, but a new shop, Calyx Berkshire, that's been bushwhacking red tape for nearly as long, opened in November right in the heart of Main Street. Owner Donna Norman wants you to know that her female-focused approach toward selling and recommending marijuana makes Calyx a relaxing and inviting experience. "It's not your typical flower shop. We are trying to shake up the industry and show that women can do it better," says Norman, adding that the industry is largely monopolized by men with deep pockets. "I'm in the store every day, and I don't think you see that with a lot of these companies that are run by major investment boards. We also overcame so many obstacles, and I think that perseverance sets us apart too."


Norman has been paying rent on her storefront for three years but couldn't open until now because of a prolonged jaunt through a bureaucratic obstacle course. COVID also impacted her construction timeline. Onboarding cannabis industry workers takes a long time as well, as certification is required. "Because our windows were covered for so many years, people were really surprised when they saw how beautiful it is inside," Norman says. "I wanted to be on Main Street to legitimize and normalize cannabis. The stigma has to be broken. Great Barrington is a really special place. We just love everything about the vibe."

Eat, Drink, and Be Merry (At Home)

Calyx isn't the only new business to open in Great Barrington in 2020. Agave, a Mexican restaurant with a contemporary edge, opened over the summer and made for great, safe outdoor dining, and Moon Cloud, a trendsetting cocktail bar and lounge, started service just a few months before the first lockdown. "We had the patio going on but have reeled it back," says Billy Jack Paul, Moon Cloud's co-owner and masterful mixologist. "We actually closed before the mandate. I'm trying to encourage everyone to stay safe and stay home so that eventually we can get back to throwing that great cocktail party we've been looking forward to."


Throughout the summer and fall, Paul played around with different approaches, including outdoor BBQs and collaborations with other businesses. Now they are functioning exclusively as a take-out operation, catering your home cocktail party with libations you won't find anywhere else along with prepared charcuterie board, tapas options, and sandwiches.

"It's tough, because one of my favorite things to do is bring the garnish game to the next level and use juices that are great fresh but not bottled," says Paul. "I've been leaning into making infusions that maintain flavor profile." The milk punch, for example, is a labor of love that takes a couple days to make. Paul uses citrus to break Blue Hill raw milk that is steeped overnight with aromatics and then strained through fine screens and filters until it's clear as chardonnay and then mixed with the appropriate liquor. He alters ingredients depending on the season and weather to make it a truly ephemeral cocktail. Strange as it may sound to the uninitiated, it's become a soothing and sultry favorite. Paul has also been collaborating with the Berkshire Botanical Garden, leading Zoom classes on the history of botanical use in cocktails, complete with drink demos.

For Great Barrington, it feels like the end of the pandemic is on the horizon. No one will say it was easy, but the town's sense of optimism, implies that better days are ahead (with a lot of new neighbors), and is enough for now. It will be a good day when Great Barrington is back in business and when everyone is just back in Great Barrington. 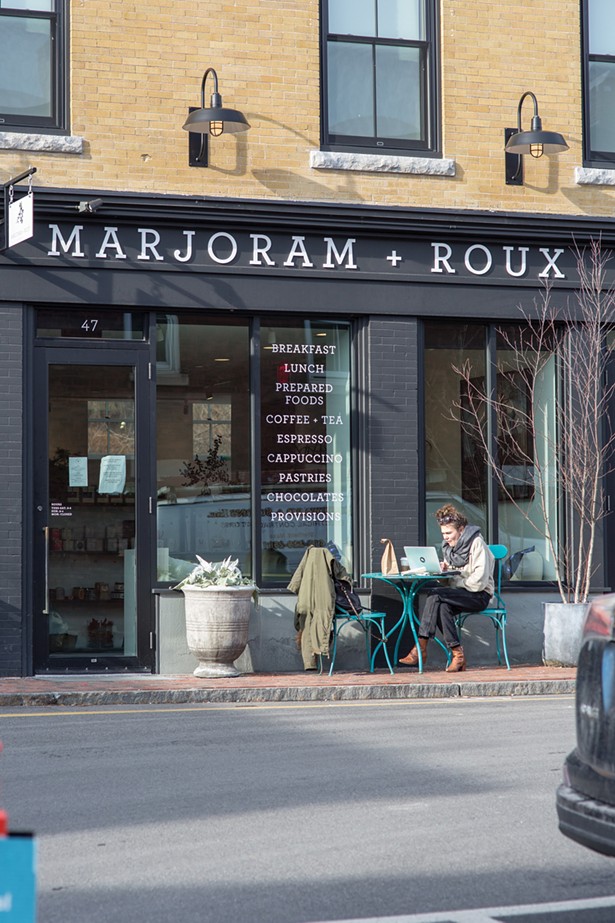 "A lot of our businesses have been really challenged—keeping employees safe, deciding what is and isn't okay, is challenging," says Andrus at the Chamber. "This community has really supported each other. We are all ready to get back to normal." The challenges COVID brought down upon Great Barrington are not unique, but what feels important about the way the community has responded is within its optimistic resolve. There's no complaining, no lamentation, just a stiff upper lip and an understanding that everyone's going to have to work a lot harder for a while to get back to even footing. Great Barrington's optimism isn't built on hope and prayer. Rather, it's an informed confidence in the ability, talent, and generosity of its residents.