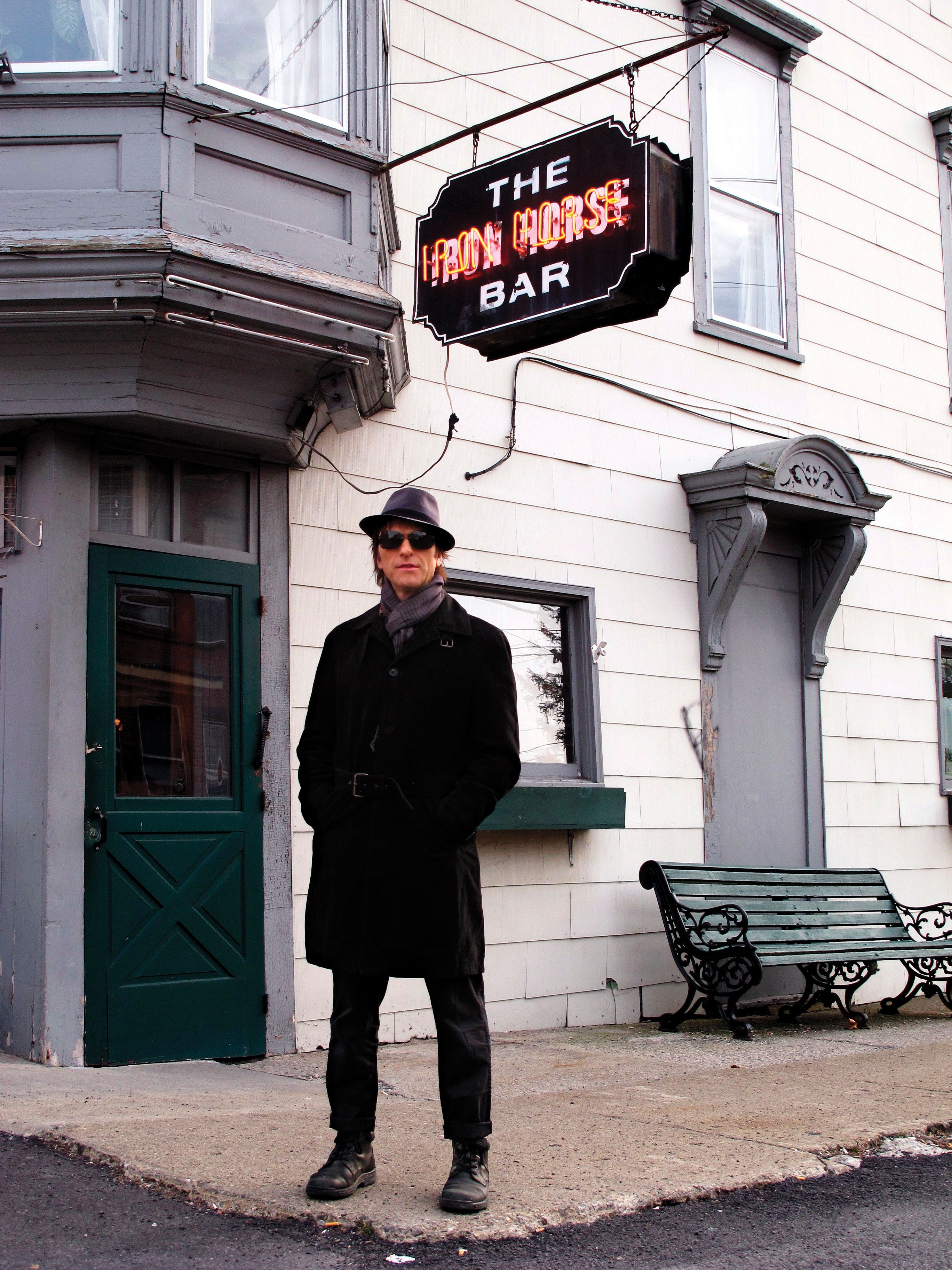 Last month marked the second anniversary of the horrific earthquake that devastated Haiti. It’s difficult to believe two full years have passed since the disaster that killed an estimated 316,000 people and leveled nearly 280,000 buildings. It seems like it was only a shocked heartbeat ago we were glued to our TVs in disbelief at the scope of the tragedy. Time does have a way of surprising us. It may also be surprising to learn there’s a line that links the beleaguered Caribbean nation with the frozen climes of the Minneapolis punk scene, runs through three of the biggest American bands of the last 30 years, and finishes in Hudson. The line, as it were, is Tommy Stinson, current bassist of Guns N’ Roses and Soul Asylum and formerly of the Replacements, as well as a talented solo artist in his own right.

Having seen the heartbreaking news reports, Stinson visited Haiti the summer after the tragedy and learned about Timkatec Schools, a Port-au-Prince institution for homeless children founded by Father Joseph Simon in 2002. Moved by the 82-year-old priest’s continued efforts in the wake of the catastrophe to house and provide vocational training for the epidemic numbers of orphans, the rocker sponsored a fall 2010 charity auction that raised nearly $50,000 in assistance, and he remains committed to helping the facility. “When Tommy contacted us out of the blue wanting to help I told him if he really wanted to understand the situation [in Haiti] he should come see it for himself—not thinking he’d really do it,” says Patrick O’Shea, who founded the schools’ parent organization, the Friends of Timkatec. “With the relief efforts we’ve met a lot of people with good intentions who never follow through. But Tommy came down right away, and I could see he was emotionally impacted by it all. He’s done everything he said he was going to do, and more.” “I guess I was kinda feeling like I wanted to give something back,” Stinson says. “I’ve had a pretty good run in life.”

Tommy Stinson has literally grown up playing rock ’n’ roll. In 1979, not long after he’d picked up the bass at age 11, he took to jamming on classic rock tunes in the basement of his mother’s South Minneapolis house with his older, guitar-playing brother, Bob Stinson, and drummer Chris Mars. One day, a would-be singer and guitarist named Paul Westerberg was waiting outside the Stinson house for the bus that took him to his janitorial job at underwear maker Munsingwear. Westerberg heard the trio and knocked on the basement door. He immediately talked his way in and helped steer the band, then named Dogbreath, away from the Yes covers the Stinsons and Mars had been playing and into the rootsy punk rock songs he’d been writing. After one gig as the Impediments, the quartet changed its name to the Replacements and became the terrors of the local scene, early on establishing the trashy, falling-apart-drunk live reputation that became their calling card.

“They were pretty wild, and it was clear even then that Tommy was a great punk rock bass player,” says Phoenicia’s Steve Almaas, bassist of Minneapolis punk godfathers the Suicide Commandos. “It was also quite striking to see someone as young as him on stage. [Replacements manager] Peter Jesperson actually had to sign on as his guardian when they started touring.” “Our mom was single and I’d been arrested three times by the time I was 11, for shoplifting and stuff like that,” Stinson recalls. “She was really supportive of the band because it kept me out of trouble. Plus, Bob was there to watch out for me.” The group signed with local label
Twin/Tone and released two slabs of hoarse, clattering, Faces/Johnny Thunders-derived garage rock—Sorry Ma,
Forgot to Take Out the Trash (1981) and Stink (1982)—at the height of the tradition-rejecting hardcore explosion. “We loved hardcore and we played with a lot of those bands,” says Stinson. “But we didn’t really fit in with them.”

Indeed, it was Westerberg’s way with a hook that would set the Replacements apart from their less tuneful peers. An asset that became more apparent with 1983’s Hootenanny and reached its full flower with the following year’s Let It Be (both Twin/Tone Records), the singer’s astonishing skills as a melodic pop songwriter soon saw the band top the best-of lists of prominent critics. It also attracted the undying respect of compatriot alternative acts like R.E.M., whose Peter Buck played on Let It Be, a landmark now hailed as one of rock’s most influential albums.

Live, the group was a shambling, cathartic joy—Mars in the rear, laying down a no-frills backbeat; Westerberg up front, rasping out boozy anthems like “Color Me Impressed”; Bob Stinson on the right, in lipstick and a dress, squeezing out razor-edged leads; and, stage left, with the cheekbones, the spiked-out hair, and the boundless exuberance, Tommy Stinson. In the early 1980s, if you were an aspiring young four-stringer operating at the genre’s more orthodox end, there were four guys to reference: Sid Vicious, Dee Dee Ramone, Paul Simonon, and Tommy Stinson. These were the dudes who made many a teen- and 20s-aged rocker want to strap on the instrument and jump around a stage.

Someone else who noticed the unstoppable younger Stinson was Tommy Erdelyi—aka founding Ramones drummer Tommy Ramone—who produced the Replacements’ 1986 major-label breakthrough, Tim (Sire Records). “[Tommy Stinson] was really energetic live, totally in the moment as a performer,” remembers Erdelyi, another Phoenicia resident. “I’d wanted to work with the Replacements for a while, so I was happy when Sire hired me [to produce the band]. Tommy was very serious in the studio, very knowledgeable and ambitious. I think he was 18 at the time.”

But despite Tim’s huge college-radio success, the band would never end up following their alt-rock contemporaries into the mainstream. “R.E.M. was good at playing the game, we never were,” Stinson says. “Playing the game never even occurred to us; we didn’t really have any idea what kind of band we were supposed to be. We were all pretty fucked up as people back then.”

More fucked up than his band mates, however, was Bob. By the time of Tim the guitarist’s Olympian alcohol and drug habits had seen him go from being a show-stopping loose cannon to a dysfunctional liability, and he was fired soon after the Tim tour. “My mom understood [the firing], but my grandma didn’t,” recalls the bassist, his quavering voice carrying a hint of emotion. “She was, like, ‘He’s your brother, how could you fire him?’ I think Bob really began to lose interest around the time of Let It Be, when Paul really came into his own as a songwriter and was getting the most attention.” With producer Jim Dickinson the band next cut 1987’s Pleased to Meet Me as a three-piece before adding new guitarist Slim Dunlap for 1989’s Don’t Tell a Soul (both Sire). The latter set yielded the group’s biggest hit, “I’ll Be You,” but the album’s sales were lackluster. The band began to fall apart during the making of 1990’s All Shook Down (Sire), which was basically a Westerberg solo record. Sadly, Bob Stinson passed away in 1995, though not from an overdose, as has been speculated. “He’d actually been sober for two weeks and was working on getting better,” explains Tommy. “But by then his heart was really bad and it just gave out.”

The Replacements went their separate ways after the breakup, with Tommy remaining in Minneapolis. Moving to guitar and lead vocals, he recorded a solo album for Sire, Friday Night Is Killing Me (1993), under the “band” name Bash & Pop. The project fizzled out in 1994, after one tour and a track in the film Clerks. He next split for the warmth of the West Coast, where he switched back to bass and assembled Perfect, a quartet that released the EP When Squirrels Play Chicken (Medium Cool Records), which was praised by AllMusic.com as “a glorious return to Stinson’s sloppy, roots-rock sound.” With Jim Dickinson producing, Perfect recorded a full-length for Medium Cool, but the sessions were shelved by Regency Pictures, which owned the label’s distributor (the album would eventually be released in 2004 by Rykodisc Records as Once, Twice, Three Times a Maybe). Frustrated, Stinson ended the group in 1998. Things were not looking good. But things were about to change. In a platinum-selling, arena-size way.

While playing on a freelance session, Stinson heard that Axl Rose was in need of a new bassist for Guns N’ Roses. He tried out, got the gig, and for the last 14 years has toured and recorded as a member of one of the planet’s most famous rock bands. His tenure with GNR has included work on the act’s legendarily trouble-plagued sixth studio album, Chinese Democracy (Geffen Records), which took a torturous 17 years to release. Many have put the disc’s trying saga down to Rose’s reputation as an erratic band leader, but Stinson insists it’s not the cause. “Everybody loves to hang shit on Axl, but he’s a really serious, perfectionist-type guy,” Stinson says. “What happened was, we were led to believe [label head and producer] Jimmy Iovine was going to be more involved with the album, but he lost interest. So Geffen brought in [Queen/Cars producer] Roy Thomas Baker, who just had us re-record all the songs three or four times, which mostly didn’t work and ended up costing $10 million. In the end, the [band] ended up producing it ourselves.” The album went on to sell over one million copies after finally appearing in 2008, and the group continues to tour in its support. Since 2005

Stinson has also performed with his old Minneapolis scene mates in Soul Asylum, stepping in for fallen bassist Karl Mueller. The remaining Replacements reunited briefly in 2006 to record two new songs for a best-of album.
Stinson and his wife, Emily Roberts, moved to Hudson last year with their four-year-old daughter. “Emily has relatives in the area, and we just fell for the town when we came up to visit,” says Stinson, who also has a 22-year-old daughter from a previous relationship. “So we found a place we liked and saved up for it.
Everyone’s been really friendly here, and we’ve met a lot of cool people. It’s definitely more my style than some white-bread suburb.” The musician recently released One Man Mutiny (2011, Done to Death Records), his second solo album after 2004’s Village Gorilla Head (Sanctuary Records). Divided between storming, Stonesy rockers (“It’s a Drag,” “Meant to Be”) and longing ballads (“Come to Hide,” the title track), One Man Mutiny was produced by Phillip Broussard, Jr. (Red Hot Chili Peppers, Weezer) and features Guns N’ Roses keyboardist Dizzy Reed and guitarist Richard Fortus, as well as Emily on vocals and her uncle, Chip Roberts, on guitar. The singer has plans to promote the record via solo appearances at the South by Southwest and North by Northeast conventions, and to perform as part of an upcoming Timkatec benefit concert.

“I’m very happy. I’m in the best spot in life I’ve ever been,” Stinson says. “I’m really busy, but I’m not a rich guy. I still don’t have what anyone would call a ‘real’ job. I’m still lookin’ for one of those. [Laughs.]”

Not too hard, though.

One Man Mutiny is out now on Done to Death Records.Tommystinson.com; Timkatec.org.