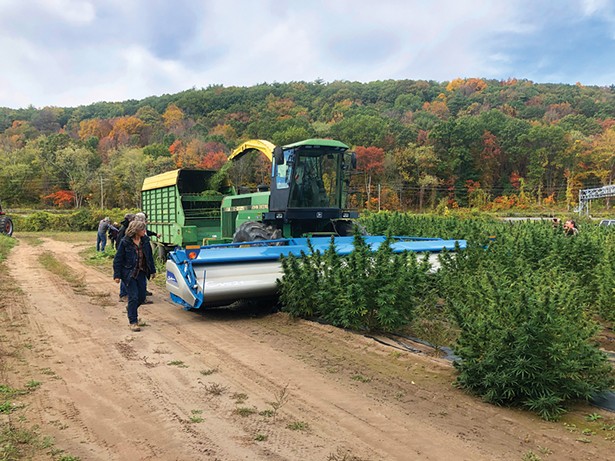 No matter what is being grown, the story of farming in America is plagued by the leitmotif of shrinking profit margins. As hemp becomes the latest cash crop in New York, a group of experienced Ulster County farmers have joined together to change the narrative.

Hempire State Growers Hudson Valley is a new co-op of local, organic hemp farmers founded by twin sisters and seventh-generation farmers Amy and Gail Hepworth. Based out of their Hepworth Farm in Milton, Hempire was born soon after hemp farming was legalized last year in New York. Their mission is to help independent small-scale farmers like themselves seize control of the capital produced by their new hemp crops before it's gobbled up by big-money corporate agricultural interests.

"If we are going to be responsible for growing a multibillion dollar industry why should the money just go right to the investment capital holder?" says Gail Hepworth. "We believe farmers deserve more."

Along with providing a network for material and intellectual support to assist the cultivation of organic hemp, Hepworth says the co-op gives Hudson Valley farmers the opportunity to pool their resources and see larger profits whether they want to sell their crop at harvest or stay invested until it's sold as processed crude oil or later yet as distilled CBD consumables.

"A lot of our farmers are at risk every year of going under," says Gail Hepworth. "The market doesn't care and there's a lack of understanding. There's an increase in demand on farmers without an increase in profits. If we don't get together on this now, hemp is going to be no more profitable for farmers than corn or onions."

Amy Hepworth took over operations of the family farm, founded in 1818, after graduating from Cornell. Gail left home and was a successful biomedical engineer for 25 years before returning to the soil 10 years ago.

In 2008 Amy Hepworth came up with a risky plan. Despite the recession, she began buying abandoned nearby farmland and leased more still from developers whose housing plans dried up. She convinced her sister to come back to the farm to help. The expansion plan worked, and Hepworth Farm organic produce is now a common sight throughout the lower Hudson Valley.

Because of Amy's agricultural expertise and Gail's business acumen, when the Hepworths got into hemp they were immediately approached by investors who wanted to give them millions in startup capital to run a large-scale hemp-growing operation. But the deal involved losing autonomy over their farmland and they turned the money down, opting instead to form Hempire State Growers.

Over the past year, Amy has convinced members or her local community of farmers to come together and create the cooperative. Some farmers were all in, while others just offered land on their farms for Hempire to manage.

Gail says the co-op is offering members market diversification by selling not just raw hemp but different CBD options, and vertical integration, so farmers can "capture profits from seed to sale."

"This is a crop and crops need farmers," Gail says. "To farm hemp commercially you need experience. That's the strength of the co-op. We have the experience. Amy knows a lot about this plant and our farmers are learning fast."

From the politicians in Albany to the farmers themselves, no one yet knows what's to come for the versatile crop. It's unclear where the state will come down when it finally determines how it will regulate CBD, but Gail's pulled in consultants to the business from her corporate past who are ready to address operational and governmental issues as they arise.

"This industry isn't easy and it's shark-infested," Gail says "The FDA hasn't landed yet on regulations and the genetics aren't stable yet either. We are hoping when everything settles, this isn't something Big Pharma wants to control. We have recruited talent who understand how to adapt to changes in policy, and we will be ready for whatever they throw at us."

The co-op includes an action committee to help with legislation and hired COO Florence Rondeau-Chang who, Hepworth says, has 25 years of experience in corporate operations.

The organization is currently made up of the Hepworths' neighboring farms (growing slowly but intentionally this important first season) but Gail says they feel a sense of obligation to make their membership open to all serious, established regional farmers looking for the type of support they're offering. "We're talking about a farm-to-table community that's 20 years in the making," she continues.

"Agriculture has created the fabric of our regional identity," Gail says. "The strength and draw of our farms is in their diversity, and hemp is now a part of that weave. We just wouldn't let an opportunity like this miss us."