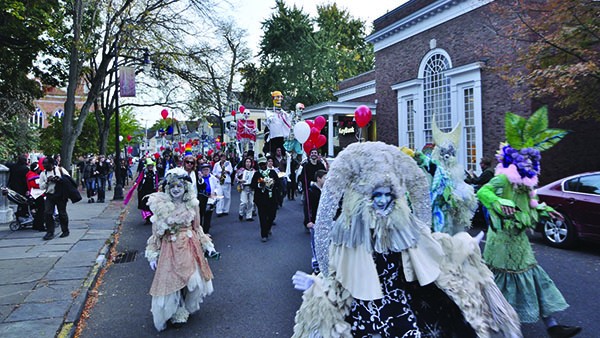 Like a life-giving contagion, the O+ Festival has spread in a manner that can only be diagnosed as elatedly exponential since its ambitious 2010 launch. And not only in its seed site of Kingston, where the three-day, citywide event has steadily increased the number of participating musicians, artists, and healthcare/wellness providers, along with its attendance, with each passing year. Last month, the first-ever Chicago O+ Festival was held, and in November, the festival's California edition will make its third appearance. The reasons for O+'s success are clear and resonant, says the phenomenon's co-founder Joe Concra, who along with a crew of likewise evangelical volunteers has been busily preparing for the 2015 Kingston O+ Festival, which will return to the Ulster County city on October 9, 10, and 11. "I think it obviously points to our mission," says Concra. "Which is to celebrate art and music while creating a bridge to accessible healthcare for artists."

Begun as a brainstorm between Concra, an artist himself, and a group of music- and art-loving doctors, dentists, and other wellness professionals, O+ presents performances and exhibitions at various venues across its host cities while offering free health and wellness care to participating musicians, artists, and festival volunteers. The 60 acts performing at the sixth annual Kingston O+ Festival include Living Colour vocalist Corey Glover, reunited power pop legends the Bongos, and indie sensations Widowspeak, Prince Rama, Quilt, and Screaming Females. Among the 25 visual and multimedia artists set to beautify Kingston's urban landscape are returning street artist Gaia, whose massive 2013 mural Artemis Emerging from the Quarry has, according to Concra, become a permanent tourist magnet that's helped the local economy. Performance pieces will include a collaboration by composer Pauline Oliveros and poet/playwright Ione, and family activities and food vendors are part of the O+ formula as well.

Registered musicians, artists, and workers at the donation- and sponsorship-funded festival can attend clinics staffed by volunteer doctors, dentists, and other medical and healing practitioners. But with the welcome advent of Obamacare since the festival originated, has the need for O+ diminished? "Just because people have health insurance doesn't mean they're healthy," maintains Concra. "Many have recurring problems, which these therapists, chiropractors, acupuncturists, and addiction and nutrition counselors can really help them with. Some doctors offer return-visit vouchers and referrals and other advice." In exchange for an all-events-access wristband, the admission request is simple. "What's it worth to you—all of these amazing bands and artists, free health clinics, yoga and other healing arts, dance parties, family events, and all of this other great stuff?" asks Concra. "We just ask that people give that question some thought and pay what they feel is appropriate and can pay."

"I think O+'s been so successful because the people who attend and are involved in making it happen see that it's really about something bigger," Concra says. "Which is building community and all of us helping each other."

The 2015 Kingston O+ Festival will take place at venues throughout Kingston on October 9, 10, and 11. For a schedule of performances, clinics, and events and other information, visit Opositivefestival.org.