The fledgling field of positive psychology is casting new light on our most coveted emotion. 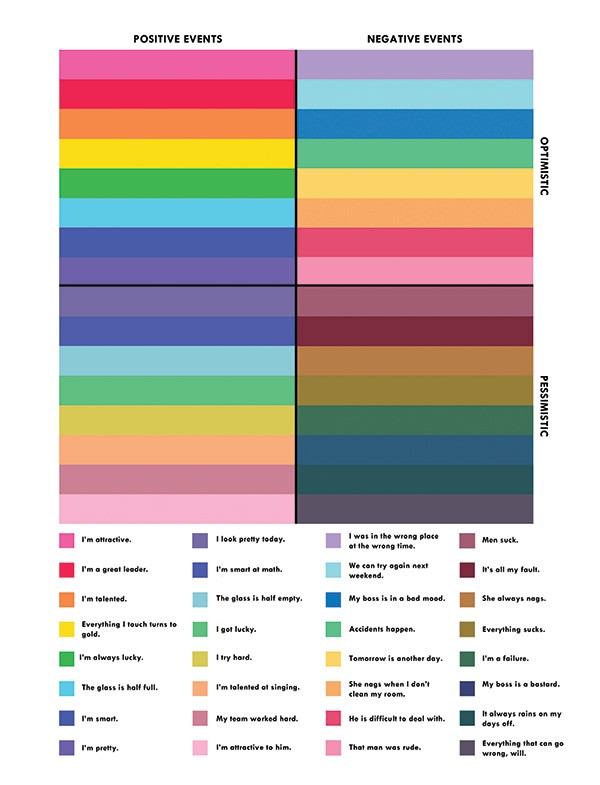 Just two decades ago, the field of psychology was a gloomy place. The science focused its clinical gaze mainly on the dark side of life—anxiety and depression, pathologies and disorders. It was glum in those academic corridors, and sometimes downright scary, though important work was being done to understand and hopefully to relieve human suffering. Then, in the 1990s, the dark curtains lifted and the light poured in. A new branch of psychology emerged with a focus on human happiness. It was as if an interior designer had come in and painted the room in bright, sunny colors. Instead of studying fear and paranoia, many researchers turned their energies toward understanding traits like optimism, resilience, and compassion. A positive psychology was born.

Officially, positive psychology has been enjoying its moment in the sun since 1998. That was the year Martin Seligman—professor of psychology at the University of Pennsylvania and the author of books like Learned Optimism (Penguin, 1998) and Authentic Happiness (Free Press, 2004)—was named president of the American Psychological Association. Yet there were definite stirrings of positive psychology before then. One pivotal moment came through the work of Richard Davidson, professor of psychology and psychiatry at the University of Wisconsin-Madison, who did some groundbreaking science with the Dalai Lama. It was the Dalai Lama who asked Davidson in 1992 why scientists didn't focus more on positive human qualities like happiness and compassion. Davidson went on to use brain-imaging technology on Buddhist monks to learn how meditation affects mental health. His findings suggest that contemplative practices can help build compassion, empathy, kindness, and attention. They also support the notion of brain plasticity—or the ability of even an adult brain to change through learning and experience. Today, the science of positive psychology continues to evolve and mature. You might say that after all our fumbling in the dark, we've found Buddha—and he's wearing a lab coat.

The Power of Positive Texting

On the beautiful, manicured campus of Vassar College, happiness experiments are afoot. This is due largely to the efforts of Michele Tugade, PhD, associate professor of psychology and director of Vassar's Emotions and Psychophysiology Laboratory. On many a weekday, you'll find Tugade's students in the lab analyzing data from her latest positive psychology study. You'll also often find them looking at smartphones—but not as an extracurricular distraction. In a sense, smartphones are what give positive psychology its true smarts; these days, they're a great way to gather data in the field. There's even a formal name for it: experience sampling methodology, which is a technique that uses global technology to assess psychological processes in the context of one's everyday life.

Recently, Tugade and her assistants completed a study in which 80 participants received about five text messages a day over the course of two weeks. The participants were divided into experimental and control groups. In the experimental group, the participants received texts that prompted them to attend to a positive experience, such as, "When you walked to class, did you appreciate your surroundings?" or "Did you take a moment to consider something you're thankful for?" In the control group, participants were asked to attend to more neutral experiences, such as, simply, "Did you walk to class?" After the two-week texting experiment was over, participants were invited into the laboratory so that researchers could run health-assessment tests. Says Tugade, "We were able to look at the differences, and we found that even after just two weeks, attending to positive experiences had benefits. The participants in the experimental group had fewer health symptoms, as we had measures of their health functioning. They also reported greater connectivity with others, which is a marker of resilience."

Going forward, Tugade plans to build on the texting study by identifying ways to train people to be more resilient in the face of stress. "Some of my early work shows that people who are able to recover from stress are those who are able to, for whatever reason, experience positive emotions in the midst of a stressful experience," says Tugade. "They might feel grateful in the midst of stress. They might feel love toward another individual or be able to cultivate positive emotions when they're feeling stressed. So where we are now is trying to identify how to train people to do that more automatically. We believe that practice is key. We need practice to identify opportunities to feel positive emotions as we go about our lives. The texting study may be one way to do that. We've found that we actually experience positive emotions more frequently over the course of our day, but we don't remember. We're trying to remind people that there are these opportunities, and they may actually have benefits."

A Case Against Smiley Faces

Despite its sunny disposition—actually, because of it—positive psychology has its foes. Barbara Ehrenreich, known for her muck-racking and myth-busting journalism, dismisses the field as an academic manifestation of what she sees as the tyranny of positive thinking in our culture. In her book Bright-Sided: How Positive Thinking Is Undermining America (Picador, 2009), Ehrenreich excoriates positive psychology as part of a cultural attitude that can verge on delusional or harmful (she even goes so far as to blame positive thinking in the business world, and that world's refusal to consider negative outcomes, for the mortgage default crisis of the late '00s). Mostly, Ehrenreich seems determined to stamp out a Norman Vincent Peale brand of positivity—such as the magical belief that a person can "think" himself into health, prosperity, and success.

Academics and researchers in the field say that it's a misconception to equate positive psychology with positive thinking. Positive psychology is about studying happiness and other positive emotions objectively and scientifically—and the findings actually don't support adopting a smiley-face attitude in all cases. "Some people might think it's just about self-affirmation and self-help, but positive psychology is actually a rigorous science that shows there's a balance in knowing when to cultivate positive emotions," says Tugade. "It can backfire when it's the wrong time or not serving your body well. Context is really important. It doesn't always make sense to make yourself feel grateful if you're in a negative state. Or if you feel an injustice, it doesn't make sense to feel happiness at that moment."

There can also be health costs, rather than benefits, to the relentless pursuit of happiness. Some work by Barbara Frederickson, a professor of psychology at the University of North Carolina at Chapel Hill, explores the difference between feeling good and doing good. "Feeling good is more hedonistic, whereas doing good is having more purpose and meaning," says Tugade. "While both are pleasant experiences, doing good actually has health benefits, but feeling good may have health costs and can make us feel worse in the long run." It sounds like the American way, but in the field there's a name for it that seems to come right out of a Kafka novel. It's called the hedonic treadmill.

Being Your Own Best Storyteller

More than a science of happiness, positive psychology has evolved over the last decade into a study of what helps people thrive. Seligman, considered by many to be the father of the field, doesn't even use the word "happiness" so much anymore—he now prefers "well-being." Yet many of Seligman's early theories continue to inform how positive psychology enters the world of clinical psychology—that is, how they come into play on your therapist's couch. One of these views is the idea of optimistic and pessimistic explanatory style. People with a pessimistic explanatory style tend to blame themselves for difficult events and believe the events will continue indefinitely. Those with an optimistic explanatory style—the more skillful style—tend to place the blame elsewhere, believe the events are transitory, and don't let the events affect other areas of their lives.

"We all create narratives about our lives," says Dr. Lenore Strocchia-Rivera, director of Learning Insights in Highland, an independent psychology practice specializing in assessments. "I think one of the best ways of applying positive psychology to clinical psychology is to help people rewrite their narratives. We know that optimism is a great way to help a person be resilient in a time of trauma and stress. But we also know from the research that optimism can be trained. People who are not typically optimistic can learn how to be. They can be more productive and more resilient in the future once they learn some of these techniques." Challenging any negative self-talk is one protocol for acquiring optimism; another is learning to see a difficult situation as a challenge instead of a threat. But to make the move from pessimism to optimism, you have to be persistent in your efforts. Shifts can happen, but only with practice.

Rivera's work is all about helping people make a positive shift through strengths-based assessments and evaluations. People come to her for a number of reasons, from career path changes to educational evaluations to memory training. "There's an old saying, 'That which you pay attention to grows and multiplies,'" says Rivera. One example she gives is the 5:1 model in marital therapy: If you want to change your partner's behavior, try giving them five positives (or feel-good compliments) for every negative (or delicately offered constructive criticism). In other words, if you want to cultivate positive behaviors and strengths instead of maladaptive behaviors and weaknesses, just keep your eye on the positives. And watch them start to snowball.

The pursuit of happiness is written into our cultural DNA, but the way positive psychology is going these days suggests that it may be time to revise it. There's a difference between running in circles on the hedonic treadmill, with a few emoticons thrown in to take the edge off, and moving forward with a true sense of meaning and purpose. Once again, the science is evolving to look a lot like ancient wisdom from the East, with a focus that pushes beyond ego pleasures toward happiness that comes from a higher place.

"It's a very Western view to just seek happiness for its own sake," says Tugade. "But I think we're losing track of why we're pursuing happiness in the first place. We need ways to help people identify a more authentic and sustainable happiness." The texting model may be one way to do that, and Tugade is considering using it to look at ways to get people to attend to their purpose more, and to think of what is valuable to them. "The kind of happiness that will linger has more to do with social connection, purpose, and community building rather than just hedonism or materialism. Identifying how to cultivate those types of experiences is where the research is moving right now. It's an exciting time to think about where we can go with this."

WATCH a TED Talk about positive psychology by Martin Seligman.