When the Hudson Opera House first reopened in 1998, people said the small cadre of volunteers restoring it were crazy. The massive building rested like a towering mausoleum at the center of then-sleepy Warren Street. Built in 1855 as Hudson's City Hall, its second floor operated as a theater space, presenting boldface names of the late 19th and early 20th century like Frederic Church, Ralph Waldo Emerson, Susan B. Anthony, and Teddy Roosevelt. But no one had touched the building since 1962, when it was sold to an out-of-town developer. It sat empty for 30 years. To say it needed a lot of work was an understatement. "This building has helped transform the city," says Executive Director Gary Schiro, who boasts that the restoration of the hall helped create a catalyst for the regeneration of downtown Hudson.

The preservation of this extraordinary landmark—New York State's oldest surviving theater—couldn't be accomplished in one fell swoop. While the goal from the beginning had been to rehabilitate the building to its full use for community access, financial strains turned the quick fix into a gradual journey. Through 12 capital projects, the first floor—with offices, a small gallery, and workshop space—was opened one room at a time; the second floor, which held a decaying performance space, begged to be brought back to life. And while over the past 20 years the hall has promoted the arts, serving more than 50,000 people annually with performances, exhibits, and free community programs, lack of useable space was holding back its potential. Maximum capacity for a concert in the small first floor gallery space was only 80 people, and events were limited to acoustic acts, with no room for dance or theater. With public and private support, the hall raised an $8.5 million Next Stage Capital Project budget last year, paving the way for an (almost) complete interior and exterior rehabilitation. Now, for the first time in 55 years, the second floor is open to the public.

And it surely breathes new life—restored 27-feet-high ceilings, freshly painted walls, a shiny wooden floor, a stage outlined with gold trim. With 300 moveable seats, dressing rooms, a green room, a lighting and sound booth, and a projector, the hall has a fully functioning space that calls not only for larger, higher-caliber theatrical performances, but a dance floor, galas, and film screenings. Plus, for the first time in the building's history, the addition of an elevator tower and handicap bathrooms makes the hall accessible to everyone. The first floor had a bit of a facelift, too—with the addition of a new gallery space, reception room, lobby, concession stand, and offices. A new roof, fire stairs, and restored cornice were added to the exterior.

Even with a massive restoration and building rename—now the Hudson Hall at the historic Hudson Opera House—retaining the space's character was vital to the project. Though that was no easy feat, says Schiro. Adding new electrical and an HVAC system to a historic building with almost no mechanical systems was a huge challenge. The proscenium arch and raked wooden floor stage (both late 19th-century additions) were preserved, as well as the historic fabric. "The character is alive and strong, but transformed," says Schiro. The iconic 23-foot original windows that dominate both the inside and out of the building were carefully removed and completely restored, returning to their home looking brand new.

To celebrate its reopening, the hall has top-notch events lined up. The third season of Classics on Hudson will feature a series of evenings through the summer of classical performers redefining the genre. From May 13 through July 30, renowned visual artist Michael St. John will exhibit "Bouquet," 23 "flower" paintings named after each of the notable speakers, artists, and performers who appeared at the opera house over the generations with proceeds from the show going to to the hall. "With this high caliber of events we can host in this building, it'll continue to bring people from near and far to Hudson," says Schiro. "Not only will we be the anchor that we've been all this time, but a real beacon that shines in the region." 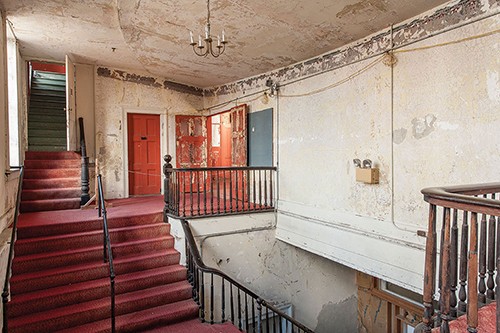 While there's still some work to be done—including rehabbing the mezzanine—Hudson Hall can finally be called the first-class venue space that has been waiting to blossom. "It still feels like itself—the historic hall we know and loved." Just with a touch of an upgrade.

Classics on Hudson kicks off the grand opening of Hudson Hall. Brooklyn Rider appears on May 7 at 5pm; Tim Fain performs with Roman Rabinovich and Eugenia Zukerman on May 20 at 7pm; and Christopher O'Riley and Matt Haimovitz perform on June 2 at 7pm. $40 premium; $25 general. (518) 822-1438; Hudsonhall.org.