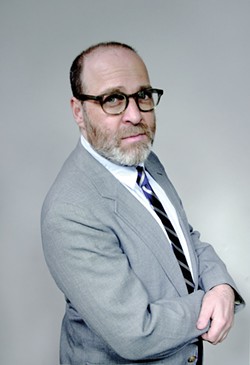 "Oh my God!" These are familiar words to fans of the adult cartoon "Bob's Burgers" (there's even a two-and-a-half-minute compilation of all the times Bob says it on YouTube). Now it's our turn to take the lord's name in vain, because H. Jon Benjamin, the voice behind Bob Belcher and Archer, from the eponymous hit animated series, is coming to town. The voice actor-cum-comedian-cum-author is slated to give what is sure to be a side-splittingly inappropriate and rambling talk about his new book at Bard College.

After getting lost in the red tape labyrinth of publicists and promoters and failing to get in touch with Benjamin for a direct interview, we decided to embrace the central premise of his book: Failure is An Option. Our Plan B: to engage in dialogue with the ever-accessible, immutable record of the printed word, namely to interview the book itself.

As the back cover boasts, "With stories, examples of artistic and literary failure, and a powerful can't-do attitude, Failure Is An Option is the book the world doesn't need right now but will get regardless."

Fans of "Archer" and "Bob's Burgers" are sure to hear Benjamin's blasé, unmistakable intonation in the responses below. You're welcome.

In an event co-sponsored by Bard College and Oblong Books & Music, H. Jon Benjamin will read and sign books at the Olin Hall at Bard in Annandale-on-Hudson on May 2 at 8pm. Learn more about the event.

What were some of your early pre-entertainment industry jobs?

How did you get into TV writing?

My first script for a network was called Squash Club...The script, appropriately, was about a young man who played squash with old men in New York City and they became his only friends. It was really about not wanting to be young—something I strongly felt in real life. Being young means you have so much left to do, but being old means just settling in quietly for the remaining days. You know, just tucking yourself in with a bowl of popcorn or some soup and welcoming the final breath (that's how I imagine death).

Anyway, the pilot script was declined, and I moved onto the next idea, which was subsequently rejected, and so on, for many, many years.

Tell us how you came up with the characters for Bob and Archer.

I did the same voice. The end.

What's a weird thing people don't know about you?

My earliest memories are of my parents cleaning. I still get bizarre pleasure in watching people clean. One of the first things I did after making some money was hire a cleaning woman to come to my studio apartment in New York City. She was young and cute, but it was less sexual attraction than an attraction to cleaning. I would sit and marvel at it, which made for an uncomfortable situation. There was always this very present energy coming from her saying, "Why are you always hanging around here in your small apartment and watching me clean?" my intentions were very easy to misread, and it was a hard distinction to communicate, like, "I'm not gawking at you the way you're thinking. I just like to watch people clean. Because of my childhood. Seriously I just need to watch!"

Give us a good name for a band.

During the Jewish holiday of Yom Kippur, people of my faith fast for twenty-four hours and on the night of the fast, they go to synagogue and pray to God to be absolved for all the sins they committed that calendar year...Every sin listed, each and every one, would make an excellent band name. C'mon tell me Casting Off the Yoke is not a really good band name. And Forty Lashes? Fucking gold. And don't tell me some prog-rock kid wouldn't want his first band to be called Obduracy. All kids who are starting a band, check out the full list in the Jewish High Holiday prayer book.

What about for an airline?

Survival of the Fattest. By no means, though, am I connecting fat with fail.

Why did you decide to write a book?

Looking at it with a critical eye, my story is something of a cautionary tale. It is the story of a failure. But by the same token, it is an aspirational tale, in that most failures never get to tell their tales. You know the old saying 'History is written by the victors.' It's like that. Failures are a voiceless mass of unrealized promise. Where would we be if this world was solely composed of failures? By nature, survival itself is a narrative imbued with a success imperative.

To be clear, this is a polemic in favor of failure. It's an assertion that failure is an option and even, at times, a viable prescription for a better life, despite its longstanding stigmatization. Failure can be incredibly freeing and an end in itself, not just that tired platitude that is a necessary step on the road to success. Despite my own success, I maintain that failure is my prevailing life force and my success has been a parallel and unrelated condition, not a consequence of my failure(s). If you're not following, that's because I'm a failure. Or because you're a failure. But either way, that's a good thing.

What are some of your best failed pickup lines?

"Do you work out or are you just naturally tense?"

"Am I seeing double, or do you have two tits?"

"I know this might sound old-fashioned, but do you want to have sex with me in a cave?"

What would you say is the central takeaway of your new book?

The key to failure being an option is a way forward. Failing at something is a signal, but not a signifier. It doesn't mean the end of something. Often, it's a springboard toward something better, or worse, but isolating a failure and fueling it with too much pressure to reverse it is never a good path. With this, I will say, I hope you fail well.