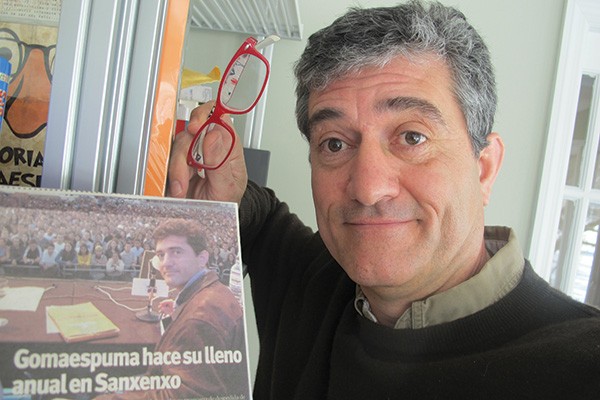 When Guillermo Fesser launched his journalism career in the 1980s in his native Madrid, it wasn't with the intention of becoming one of Spain's national icons. All he set out to do with the weekly radio show "Gomaespuma"—which means "foam" in Spanish—was report the news his way: with irrepressible curiosity, humor, compassion, and respect for all interviewees, even those with whom he disagreed. During Gomaespuma's 25-year run, Fesser produced films, TV specials, plays, articles and books, and founded with his co-host, Juan Luis, the nonprofit Gomaespuma Foundation, dedicated to facilitating access to education in Nicaragua and Sri Lanka. By the time Fesser and his American wife, Sarah Hill, decided to take their three children to live in Hill's native Rhinebeck, Fesser was the Spanish equivalent of Jon Stewart. Even Spain's King Juan Carlos I expressed disappointment over the ending of "Gomaespuma."

Fortunately for Spain—and the Hudson Valley—Fesser's show was far from over. Fesser's move to Rhinebeck merely inspired his next career phase. One Hundred Miles from Manhattan (A Cien Millas de Manhattan), Fesser's memoir of his move to Rhinebeck, was a bestseller in Spain, spawning a Spanish TV show there, an ongoing weekly show for Onda Cero Radio in Spain, and a Huffington Post blog. The book is replete with local history and populated by local legends like sculptor John Corcoran, New Yorker cartoonist Danny Shanahan, and Big Bird's late creator, Kermit Love. Fesser's chock-full life in Rhinebeck includes befriending a former devotee of Rev. Moon, climbing Slide Mountain, iceboating, making maple syrup, meeting Rhinebeck's ghosts and forebears, having fun with his kids, visiting a Texas bison ranch, venturing into the steam system beneath New York City, going white-water rafting in Alaska, and spending New Year's Eve jumping on furniture—all the while recording the stories of the people he meets.

The English version of One Hundred Miles from Manhattan (Little Bridge Productions/Epigraph Publishing) has just been published. On Sunday, April 27, in Rhinebeck, Oblong Books will host a book launch party at Upstate Films at 1 pm. 100milesmanhattan.com.

Is Rhinebeck famous in Spain?

In Spain, they can't pronounce Rhinebeck. They all say "Reen-a-beck."

When the book came out, just after Obama won his first election, I did a debate with the Spanish secretary of state at Bellas Artes, the Madrid cultural center, about the perception of the United States. People were saying, "Oh yeah, Obama got elected, but he's not an average American. He's special." Anytime something cool happens in America, in Europe we say, "Oh, he's not really American." Like, "We like Woody Allen's movies, but he's not really American." People were saying, "Obama, he's a cool guy, but he's not really American. He's an exception." And I would say, "No, he's not an exception." I mean, it's exceptional that he got elected, but he's as American as Ronald Reagan or the Bushes. They all live in the same America. There's only one kind of America to Europeans, but there's actually diversity here—that's America's greatness.