The idea that there had to be some arable land preserved as part of the commons—the natural bounty that belongs to every human breathing—goes back centuries, as long as there have been aristocrats building fences. In the United Kingdom, Europe, and much of the developing world, the concept of allotments—garden plots not controlled by private property owners—has long been accepted as vital to communal survival. When people are empowered to grow food for themselves, everyone benefits.

In the United States, as elsewhere, not even the forward march of industrialization could completely quell the basic human urge to produce one's own vittles. Detroit was the first major city to deploy vacant lots as garden spots for the poor, in response to an 1893 recession. In New York, one Fannie Griscom Parsons began an educational garden in Dewitt Clinton Park, seeking to teach kids the rewards of work and love of nature. Victory gardens fed the home front through the tight rationing of two world wars. Economic downturns and food shortages have always motivated governments to encourage gardening and offer support for gardening rights. 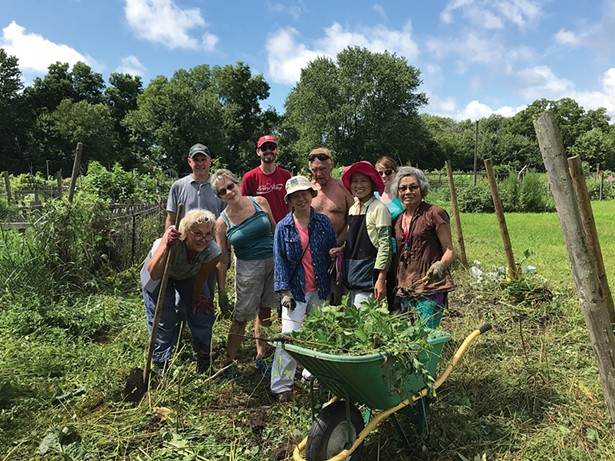 The back-to-the-land impulse of the '60s and '70s brought a fresh energy to defending the right to garden, and the Hudson Valley was fertile ground. "The original funding for the New Paltz Gardens for Nutrition came from a state program in response to a recession in 1976," says Jaimee Uhlenbrock, board president for the garden. "The state gave a little money to municipalities, the village donated five acres of floodplain and hired a college student to oversee the program. Pete Ferrante came and plowed every season." The chance to garden together was immediately popular, and people didn't quit gardening when the recession abated.

Today the program is "one of the jewels in the crown of New Paltz," says Uhlenbrock. "It's a fabulous community. The members are really great about helping each other, the place [on the bank of the Wallkill off Huguenot Street] is magical, water and full sun and tools are all provided free, and we do everything we can to ensure every gardener a successful outcome." There are 100 plots shared among 120 gardeners. The board helps resolve the occasional dispute, solve larger problems (funds have been raised successfully in the last couple of seasons for an infiltration well when the Wallkill River suffered a toxic algae bloom and a new solar deer fence), and keeps the good times rolling with educational events (a beekeeping event was a big hit this spring), communal cleanup days, and a season-end potluck. "We're all very committed to the mission: sustainability, stewardship, and good organic food," Uhlenbrock says.

"We're all very committed to the mission: sustainability, stewardship, and good organic food." tweet this

Community gardening can sprout in a variety of formats and has done so in a variety of Hudson Valley towns. A popular and successful variation going strong in city settings is urban farming with a formal educational component. In Kingston and Newburgh, Hudson and Beacon, teenage interns do a lot of the gardening—and learn not just about soil and seeds and cooking, but about food justice, sustainability, and business. "We hire a total of about 22 young people every season and pay them $11.10 an hour," says Helanna Bratman, program coordinator of the Green Teen Community Gardening Program administered by the Cornell Cooperative Extension at Beacon's Common Ground Farm. "We sell at two locations with our mobile market, behind the Community Health Center and next to the Senior Friendship Center," she says. "The intergenerational interactions are great for both sides. The teens run the market, learn how to make a display enticing and how to do customer service right—skills they can use anywhere. Plus, they know how to grow and cook produce." In 2017, the program sold over 2,000 pounds of produce through its mobile markets, and over 60 percent of the purchases were made using some type of public food benefit.

Kingston's YMCA Farm Project is administered by farmer KayCee Wimbish. Besides the teen crew growing food for market, there's a children's learning garden worked and played in by the summer campers aged five to 12. "We try to grow stuff in there that's snackable and sensory," says Wimbish. "We keep a plot empty so kids can dig. The contact with soil and insects and plants, the excitement of pulling a carrot out of the ground—all those connections are so important."

"We keep a plot empty so kids can dig. The contact with soil and insects and plants, the excitement of pulling a carrot out of the ground—all those connections are so important." tweet this
Administrative details vary from place to place; some programs focus on donating to food banks, others on providing ample, inexpensive organic produce for market. But despite the wholehearted embrace of community gardening by state government (New York's Department of Ag and Markets has had a Community Garden Task Force sine 2015) there's something inherently and delightfully subversive about asserting our common dominion over the commons. It may be one of the most gently radical activities one can get a grant for, and its spreading root system tends to sprout crops like art and block parties.

In Hudson, a USDA-designated food desert, the educational organization Kite's Nest runs River City Garden. The intergenerational urban community garden and education site offers a way for 2nd Ward residents to grow their own food in a place where access to fresh produce is scarce. There are currently 30 plots being cultivated with more being planned to meet the growing demand. The site also serves as an outdoor classroom and location for community work days, shared meals, and other garden-related programming.

In Saugerties, what began in 2011 as the Long Spoon Collective grew into a new project, The Underground Center, when co-organizers Chase Randell and Cassandra Taylor realized that the original vision had pulled in a demographic that was "worryingly white and upper class," according to Randell. "Once a community forms, even with good intentions, it's hard to go back and change the cultural makeup of the group," he adds. "As someone who grew up poor in Saugerties, I was worried about these barriers to entry for the majority of the people in the community." Since 2017, the Underground folks have been building good soil and collaborating with the Boys and Girls Club and Ulster Works, and administering the Saugerties Free Food Program.

Even in its simplest form, leasing out plots and sharing a shed and some tools, a community garden cultivates a mood along with the food. When Woodstock poets Pamela Twining and Andy Clausen relocated to an apartment, they were relieved and elated to discover the Woodstock Community Garden at Andy Lee Field, with its communal berries, rhubarb, comfrey, and mint. "We love having the fresh food, but even more than that, we love getting out early in the morning to be part of the sunrise and the early birdsong," says Twining. "The $30 and one work day a year is definitely doable, and there's nothing like coming home with armloads of vegetables and fruit! We're eating salads already—lettuce, spinach, dill, radishes, scallions. There is nothing like homegrown, homemade tomato sauce!"

If your location lacks a community garden and you'd like to help make it happen, there are lots of resources to get you on your way at Agriculture.ny.gov/cg/cgresources.