After 80 Years, this 253-Acre Family Compound Next to Hunter Mountain is on the Market 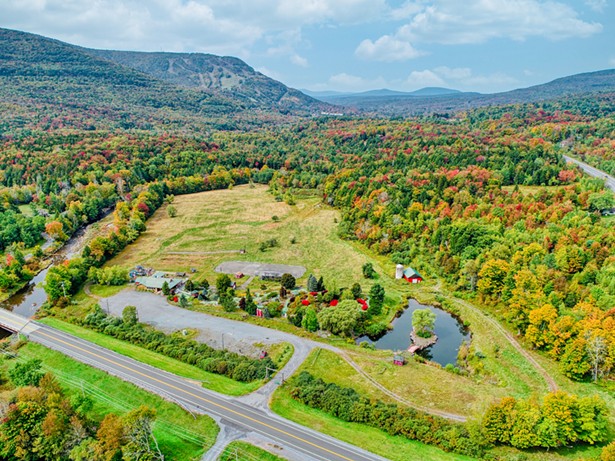 Some Catskills vistas just stick with you. The view of Hunter Mountain, one of the region's beloved ski resorts, happens to be one of them. In a once-in-a-generation opportunity, the changing of the guard at ClovesEnd presents the chance to make it yours.

Tucked between Hunter and Tannersville, 253 acres of glorious creek-riven hillsides and fields with views of Stony Clove Notch and the nearby ski mountain have been in the Rogers/Kassel family for almost a century.

On one side of Route 23A is the 175 acres that made up the family's estate, complete with a classic barn and farmhouse, a c.1920s Victorian oozing charm, three cottages, and a three-car carriage garage. Across the road lies 78 acres that were in use for a time as a recreation complex with mini-golf, driving range, restaurant, and fishing pond.

"It's been the family compound since 1939; before that it was a dairy farm; before that it was a sheep farm," says owner Kerul Kassel. "There were pear trees, apple trees, sugar maples, and blackberry patches. My grandparents had an arrangement with the farmer who leased the property, and my grandparents would get some of the produce. The little white cottage by the road was where the farmer would stay when working the land. The story I heard growing up was that my grandmother would tell my grandfather, 'Jack, the water is on to boil! Go pick the corn.'"

As Kassel's grandparents did, many Brooklyn families made a much-loved tradition of summers at the family compound. "My grandfather would come up on the weekends; my grandmother and my mom would be there all the time, cooking and cleaning and making it nice all week long," she says. "The main house was where the family stayed, and friends would occupy all the other houses. It was what people did."

Kassel has vivid memories of her visits to the compound as a child. "I remember big meals, loads of food and family. I remember gathering pebbles to throw over the old bridge over the Schoharie where we'd go and look for fish." When her grandparents' compound days drew to a close, Kassel found herself the only family member with an interest in the property. "I lived there from '79 to '81, but the cold was too much," she says. "I had a vague idea of starting an intentional educational community there, but life took other directions."

Over the years, Kassel would come back to ClovesEnd when she needed to. It's where she finished her doctoral thesis and later, wrote several books. Now, she's saying a fond, grateful farewell to the place that helped form her and provided respite for generations of her family. "It's been my haven and my sanctuary, but now it's time to pass the torch," she says. "I have to let go of the outcome, but I do hope that whatever comes next respects the land."