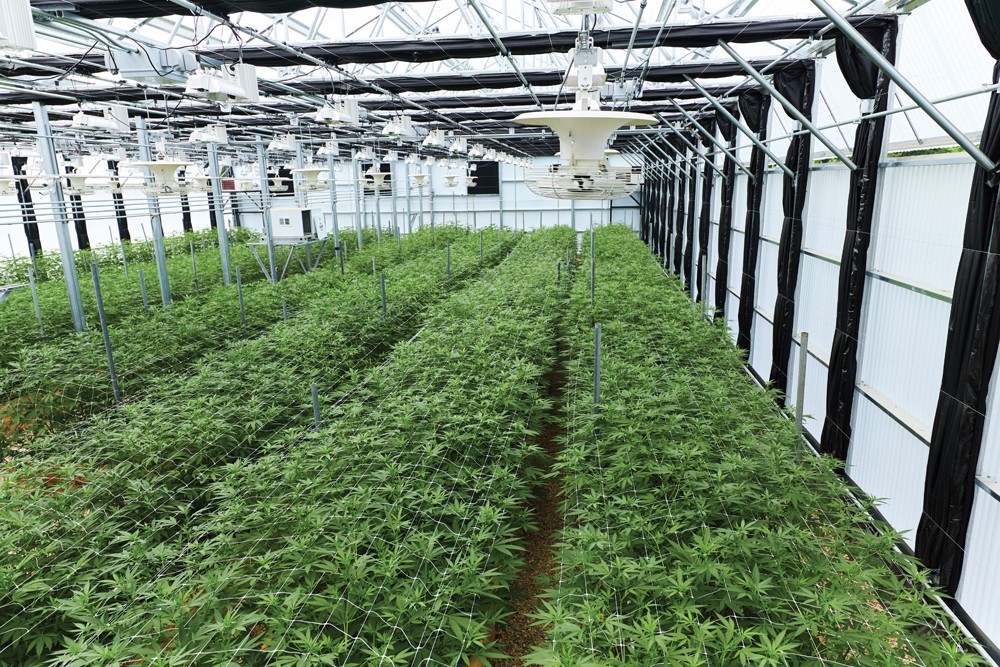 As cannabis increasingly becomes available nationwide for both medical and recreational use, New York State, where the plant is currently decriminalized, is likely to be among the next states to join one of the least understood, and at times controversial, socioeconomic booms of the century to date—legal cannabis. But how this landscape will appear, and what New Yorkers can come to expect from legalized cannabis should it occur, is difficult to predict. Each state has its own set of regulations, few of which are universally consistent. However, with nationwide legalization entering the second half of its first decade, and the recent passing of New York Senate Bill S6184A, defining the growth and distribution of industrial hemp in the state, patterns and expectations are beginning to emerge that New Yorkers can learn from.

Cannabis is complex, multidimensional, and has seen myriad applications across multiple cultures for millennia. It's known for its rendering consumers "high," a psychoactive reaction to ingesting certain parts of the plant, but that is only one of its many uses.


Cannabis, in the purest scientific sense, is a genus of plants in the Cannabaceae family, of which there are three main species, Cannabis sativa, Cannabis indica, and Cannabis ruderalis. Cannabaceae plants contain more than 80 chemical compounds, including THC, the one which creates the euphoric effects, and CBD, a nonpsychoactive compound that is used as pain and anti-inflammatory medication. THC, the compound that recreational bills are concerned with, is primarily found in cannabis flowers, while CBD is found everywhere in the plant, bar the seeds.

The third characteristic or general application of Cannabaceae plants is hemp, which is not a chemical compound, rather cannabis that contains 0.3 percent or less THC content when dried. The stalks of this product are also used to make ropes and threads. While finicky, these distinctions are crucial when understanding the regulations around cannabis production, distribution, possession, and consumption.

At time of print, recreational cannabis is legal in 15 states, as well as the District of Columbia, with all but two states, Nebraska and Idaho, permitting some form of medical program. Cannabis is also considered legal on Indigenous land due to the hazy laws relating to tribal sovereignty, but substantial programs are not commonplace, with federal overreach often difficult to overcome. To date, only three dispensaries exist on tribal land, all of which are in Washington State.


Cannabis dispensaries are carefully branded lifestyle outlets designed to educate customers as much as to sling product. Their wares, of which there is an ever-increasing diversity, range from THC-infused edibles, including gummy bears and chocolate, to cannabis-derived tinctures, soft drinks, and salves. Cannabis flower—the actual plant that generations of college student have smoked—is just one of many products. Discretion and security are maintained throughout a dispensary visit. IDs are checked at the door, and all purchases leave sealed within tamper-proof bags for transport.

Tucked within the hills and valleys of the Berkshires, just over the New York border from Taconic State Park, is the town of Sheffield. One of several rural municipalities experiencing a revitalization of its historic farming communities, Sheffield is home to The Pass, a family-run cannabis firm and dispensary that has built a vertically integrated model that keeps everything under one roof.

Having taken inspiration from the Berkshires' farm-to-table ethos, The Pass, opened in July 2020, describes itself as a "seed-to-sale, farm-to-label" purveyor that tracks and quality controls from the moment the first seedlings sprout in the farm's greenhouse, to the multiple consumer grade products available at the on-site store.

"If you think of us like a winery versus a package store, you'll start to get an idea of what we are doing here," explains Ally Brown, marketing manager at The Pass. "We have a multilevel indoor facility and a greenhouse. Everything is done on-site—drying, curing, trimming. Our extracts and edibles are also created on site, all of which are then third-party tested. As soon as they pass, we can bring the product right through the doors."

The town of Sheffield's motto is, "He Who Plants a Tree Plants Hope," and it is a sentiment that is reflected in all the cannabis-related activities going on in Sheffield and the Berkshires. As Ally Brown puts it: "I like to call certain people cannaesuris [cannabis connoisseurs], and that's exactly what we're doing here in Sheffield."

The deep affection that Brown and her colleagues at The Pass hold for cannabis is evident, their motivations driven by a love for the plant rather than commodification. This sentiment is echoed by Colorado native and industry legend Meg Sanders. Sanders has been in the cannabis space since 2009, and her latest venture, Canna Provisions, has seen the former CEO of multimillion dollar grow and dispensary firm MiNDFUL, also make her way to the Bay State.

With three locations—Lee, Holyoke, and Easthampton—Canna Provisions is a group of cannabis professionals that source, evaluate, and distribute commercial grade cannabis products from a network of approved vendors. Focusing their attentions on craft cultivators and manufacturers, Canna Provisions is another example of a local enterprise with its heart on its sleeve. "I am a big fan of small and profitable," explains Sanders. "I believe in sharing the wealth, ensuring employees are paid well. And we have a commitment to working with anyone, so long as their ethos and culture fits with ours."

Sanders's mission is evident throughout the Canna Provisions enterprise. The firm's head of cultivation, Greg "Chemdog" Krzanowski, is a former cannabis felon, but what matters is Krzanowski's knowledge of the plant, not his criminal record. "Doing the right thing is rarely a negative," continues Sanders, "There's a lot of magic you don't see on a spreadsheet. We want to ensure that the vision and the heart and soul supports that, and people buy because of what you're doing. You better have an authentic story, and you better live it and breathe it every damn day."

Authentic stories define the cannabis industry in Massachusetts, and in the quiet mill town of Uxbridge, innovative thinking is merging with the needs of a COVID-scarred world. Billed as the world's first drive-thru dispensary, Green N' Go, set to open in March 2021, was conceived as a solution to customers being required to wait in lines outside conventional dispensaries as a prerequisite of social distancing. "People should have access to medicine without feeling uncomfortable," explains Green N' Go COO Jason Delamater, "whether standing in line in the freezing New England winter, or lacking the privacy some would prefer when acquiring cannabis."

"With the needs of the patient and consumer in mind," continues Delamater, "we developed a contact-free solution that enables the customer to place an order online and pick it up without leaving their vehicle or coming into direct contact with our staff."

Cannabis in New York: Recreational on the Horizon?

New York might not have recreational cannabis, but its hemp and medical cannabis industries are booming. The state's combined market was valued at $1.8 billion in 2018, and with Governor Cuomo and the Legislature pushing for the legalization of recreational cannabis in 2021's legislative session, New York would see an estimated $300 million in additional annual tax revenue.


The Hepworth family of Ulster County has been farming the Hudson Valley since the early 1800s. With deep roots in local agriculture, the family's latest enterprise sees the Hepworths taking to the soil once again in the shape of a woman-founded and run cooperative, Hempire State Growers. Structured as an opportunity for local farms to benefit from a cash crop, the cooperative aims to rejuvenate the region's farming economic fortunes through wholesale and consumer hemp sales both online and in their store in Milton. "The mission is to incorporate regenerative agriculture, to support the local economy, and help with human wellness," comments Vanessa Park, communications director, "and CBD hemp is the perfect crop for the family to invest in." 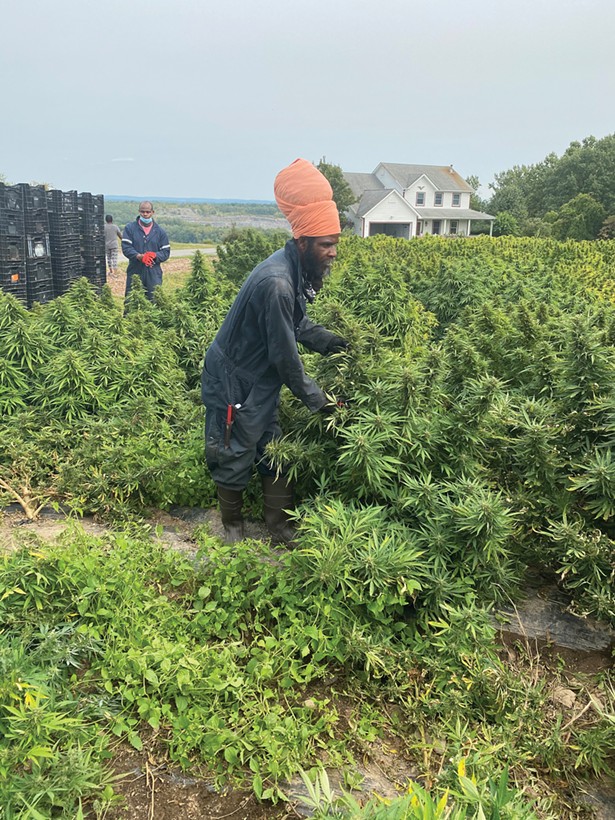 Like their contemporaries at The Pass, Hempire State Growers is another vertically integrated model, practicing what the Hepworths refer to as, "soil-to-oil, seed-to-sale." Together, the cooperative owns 200 acres of hemp fields intended for use in medicinal CBD products, but with the FDA having only approved one CBD-derived drug to date, Epidiolex, product integrity remains a moving target. "Despite there being no cohesive nationwide regulations behind CBD, we want to ensure traceability and quality in our products," continues Park, "and both the consumer and the plant deserve a relationship that works."

Another vertically integrated firm focused on medicinal cannabis is Etain. Founded in 2015, Etain is not only a venerable figure in the New York market, but it is also the only woman-owned medical cannabis dispensary in the state. Unlike recreational dispensaries such as The Pass, Etain's THC-based products are only available to patients in possession of an approved New York medical cannabis card, which can only be prescribed by a primary care physician.

Under current legislation, medical cannabis can be used to treat cancer, AIDS, ALS, Parkinson's disease, multiple sclerosis, and post-traumatic stress disorder, but the patient must also display, to quote Health NY, "one or more complicating conditions to qualify." And it is a popular prescription. Etain's annual revenue was $1.47 million in 2020, coming from just four locations in Manhattan, Kingston, Syracuse, and Yonkers.

Cannabis products are also being used as a medicine by the Shinnecock tribe of Long Island, and Shinnecock Hemp Growers, launched in 2019, has fused traditional healing and agricultural practices to produce sovereign, Indigenous hemp. The brainchild of Rainbow Chavis and her daughter Nasha, the operation is a community endeavor, with the tribe awarding the family a lifetime, no-cost lease on the land on which they grow their hemp plants. "We are mothers, both of us, and we both want to help heal the people with natural medicines," explains Chavis, "to be able to put our knowledge of cannabis, hemp, and natural medicines out there in the world, and get people educated as part of the process."

Chavis has many reasons for her involvement with the plant, and on Shinnecock land, it is an interconnected, symbiotic relationship with the Earth: "As a Native American people, we grow with Mother Earth in mind all the time. We remember to not overly plant, overly harvest, to help the land, and that's what hemp does, it helps the soil."

Whether a fully fledged cannabis industry can take root in New York still very much remains to be seen, but the signs are there. The second part of this two-part series will examine the current New York landscape in greater detail, including existing legislation and proposed changes in Albany, as well as what social and economic changes the state might face. Next month, we'll also dig deeper into those shaping the industry to understand what motivates their push toward legalization, and identify who might ultimately benefit.

Bundle Up To ‘Better Your Journey’ With Canna Provisions Sponsored

Presented with The Pass, Canna Provisions and Theory Wellness