Civilization began with the domestication of grain. Bread is a central image of home and prosperity in many cultures, and remains an enduring archetype of sustenance. Yet as industrial farming has come to dominate, most of us have lost all connection with the cereals that form such a fundamental part of our diet. After three decades as a beekeeper, baker, early organic adopter, and now cafe and store owner, Don Lewis has arrived at a place where he feels all of that is about to change. “We’re at a tipping point; awareness and demand are increasing dramatically” Lewis says, and he is on a mission to help the Hudson Valley produce as much organic grain as possible.

Wild Hive Farm began as an apiary. Seeking to expand, after a few years he took inspiration from his grandmother—who baked, cooked, and preserved a wide variety of food for his family—and began baking bread to sell alongside his honey at the Union Square Farmers’ Market. About 10 years later, Lewis met a farmer who had started growing some of his wheat for human consumption. “He said, ‘Here, try this flour,’ and I stuck my hand in. In that moment, I saw that there was a whole other world in there.” Lewis began using as much local flour as he could in his breads, and began contracting with growers to get more grain that he could grind himself. Over the following years, he gradually had enough to make his bread 100 percent local, and about five years ago he began producing extra grain and flour to sell to retailers. Lewis also donates some to Dutchess Outreach, which he says “closes the circle”; by making his grains available to the less fortunate, Lewis hopes to return the mill to its historic place at the center of a community.

In November 2008, Lewis opened the Wild Hive Farm store in Clinton Corners, combining the bakery with a cafe and store selling local, organic products in the very building where the general store used to be. The cafe features home-style cooking, and the store carries an increasing variety of exclusively local beans, maple syrup, jams, dairy, and produce, as well as all of the Wild Hive Farm grains and baked goods. This summer they will also offer a large variety of local produce, make picnic baskets to order, and begin teaching classes on baking and pasta making.

A glance at the cafe menu reveals the commitment to local products; most of the ingredients—meat, cheese, produce, beans—list their local source right in the description of the dish. The line of baked goods includes a variety of whole-grain breads and sweets. The cinnamon rolls, made with whole-wheat flour, have an actual flavor of wheat with just the right sweetness—a pleasant departure from the cloying norm. For the home cook, though, the grains and flours are the stars. Ric Orlando, chef-owner of New World Home Cooking in Saugerties, says, “We use the polenta to make yellow grits with shrimp, and the wheat berries to make a wild mushroom farro-style risotto. Don’s grains are so good, and so fresh. Because commodity grains are overproduced and stored for so long, they often have some of the fats removed to keep them from going rancid. [Wild Hive] grains remind me of the grains I had recently in Puglia [Italy]: complete, and full of flavor.”

In the coming months, Lewis has plans to move the mill to a location nearby that will increase capacity and finally allow for visitors to come see the operation in action. There will also be room for him to begin raising chickens so the cafe can serve its own birds and eggs. “The new facility will be able to mill a tremendous amount of flour,” Lewis says, anticipating a doubling of capacity by next year. This will allow him to offer flour to more local retailers and businesses, which he expects will spur more local farmers to begin growing grain for the mill. Lewis will also make his de-huller available to those who either grow organically or who are moving in that direction and meet Lewis’s personal standards. De-hulling is what turns grain from animal feed to human food, and the machines are scarce as a result of centralized commodity agriculture. By removing this bottleneck, Lewis hopes to allow our region to become much more self-sufficient in grain, and serve as an example to the rest of the country, though he acknowledges that some regulations will need to be changed to allow for more local processing.

Lewis’ most recent epiphany came on a trip to Turin, Italy, last October, where he attended the Terra Madre (a global food community organized by Slow Food International) conference. Lewis says that the introductory speech alone was worth the whole trip. “I was so energized that I could have turned around and come right home afterwards,” he says. In the speech (viewable on YouTube, in Italian) Slow Food International President Carlo Petrini lays out the progress, challenges, and goals of the local food movement, describing the central role he sees it playing in bringing lasting change to the world: “Starting with food, we will succeed in bringing together agriculture, the environment, climate change, sustainability, and the new clean energy.” He goes on to summarize the movement’s purpose: “Quality is not a luxury; quality is a right!” to thunderous applause.

Lewis, with decades of hands-on expertise and the zeal of a convert, sees the time as right for the transformation to a new paradigm of food production, saying, “We’re finally moving back in the direction that our ancestors took for granted, where all their ingredients were local, but we’re doing it deliberately, because we have to. New knowledge is going to change the food supply forever. We’re going in a sustainable direction, and hoping to bring you with us.” Since civilization began with grain, it seems appropriate that civilization 2.0 might also spring in part from these powerful seeds.

Take advantage of our local bounty to make a luxurious, healthy dish that all but eliminates the need for imported ingredients. As written, it requires only salt and pepper from afar, but substitutions can easily be made as diet and availability dictate. This recipe features things we can find locally in April. If you can’t get ramps or fresh peas, try using leeks and parsnips; just add them all at the beginning so they cook along with the grain. If you have some nettles, add them when you would the ramp greens. At other times of year use whatever produce is at its best.

To increase the yield, simply increase the amounts; the only important ratio is 3-to-1 broth to pre-soaking grain. This recipe makes a first course for four or a main dish for two. All other measurements are approximate—feel free to mix it up a little. Risotto is infinitely malleable.

Soak the grain mixture in enough water to cover for at least one to three hours, then drain. Mince the onion and sweat it in the butter on medium-low until translucent. Add the ramp bulbs and let them soften for a minute, then add the grains and stir to coat them with butter. If you have some local white wine, add a good glug of it and stir. Then, add broth a ladleful at a time, stirring to free anything stuck to the bottom of the pan. Once the broth is almost all absorbed, stir in another ladle. Continue for about 18 to 20 minutes, until the hardest grains are becoming al dente. Then stir in the peas, ramp greens, and a bit more broth. When the toughest of the grains have an appealingly toothsome bite, quickly stir in the yogurt or cheese and the parsley, along with enough broth (if needed) to bring it all to the desired consistency, and season with salt and pepper.

Serve with a good Hudson Valley chardonnay and a salad of early spring greens. 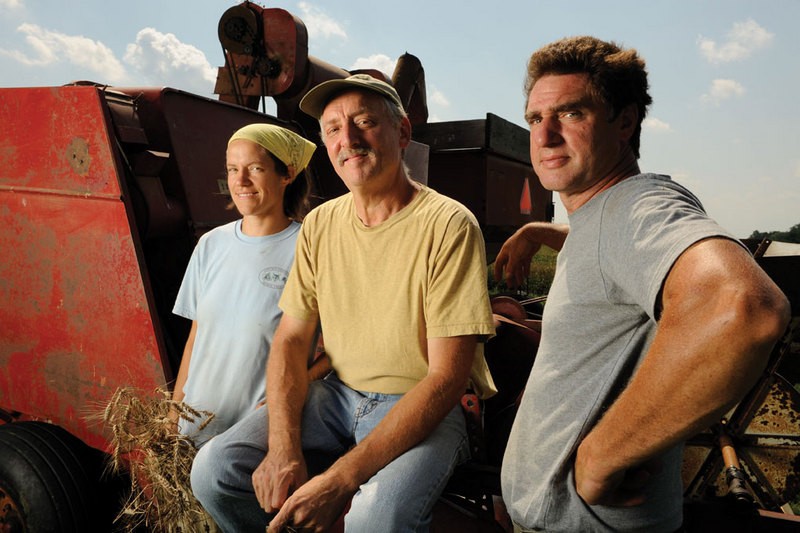 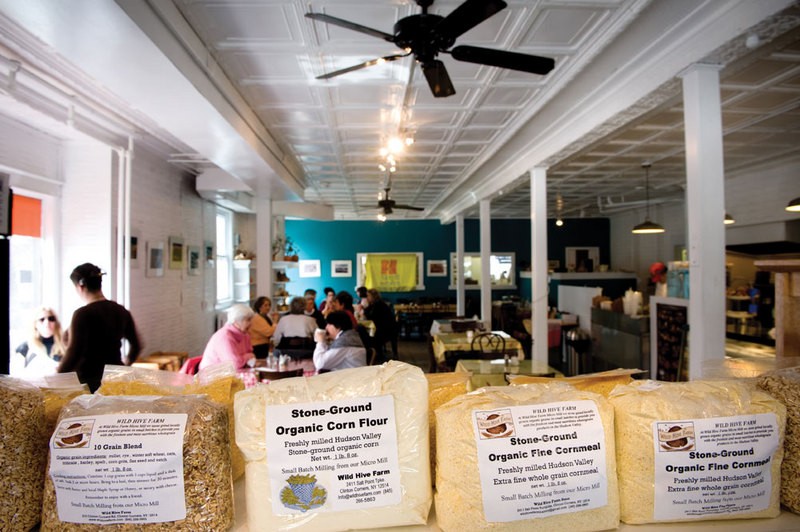 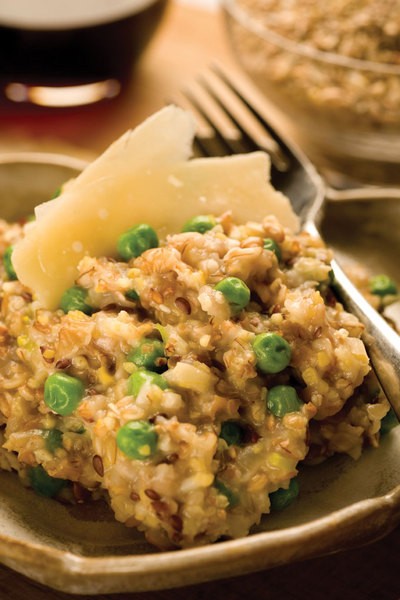