It can be your ally on this journey called life. 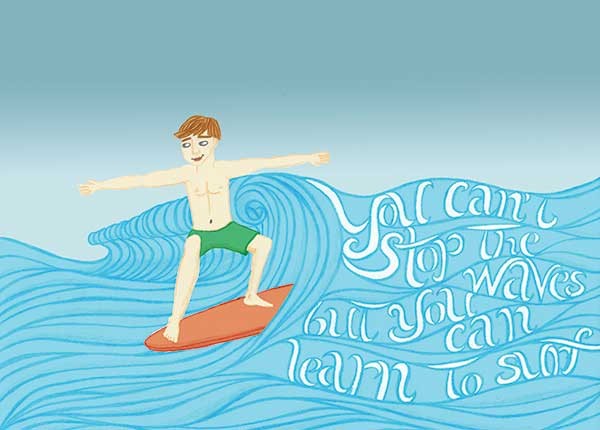 Ernest Shaw, MD, is asking me to stare at a raisin. "Look at it like you're from Mars, like you've never seen a raisin before," he instructs. "What do you see?" Less than an hour ago I was stranded in West Hurley, my car lodged in a shrub after careening off-road over the first snowfall of the season. But now, in a conference room in Kingston—eons away from AAA, a winch, and a pickup truck—I am descending into the amber crevices and otherworldly ridges of a golden raisin sitting in my palm. About a dozen other students surround me, also communing with wrinkled fruit. After several minutes, Shaw invites our Martian observations about the raisin's look, feel, and scent—from the brainlike folds of its form to the sticky residue it leaves on the skin. Then he instructs us to put the raisin in our mouths but not to bite it. I hold it on my tongue and let it roll around for what feels like an age—a kind of long, slow gustatory foreplay—bringing my attention to realms of texture and taste I never knew existed in a Sun-Maid box. Eventually, Shaw tells us to crush the raisin gently with our teeth, releasing a sweet explosion—then to linger here for a while before allowing the ragged, wine-like fragments to slide down our throats. We are to feel and note every sensation before the fruit disappears into digestive oblivion.

The raisin meditation, I discover later, is a classic way to begin a course in Mindfulness-Based Stress Reduction (MBSR)—first developed by Jon Kabat-Zinn at the University of Massachusetts Medical School in 1979, and now taught by instructors like Shaw in cities across America. Kabat-Zinn, a professor of medicine with Buddhist training, originally created the course to help patients cope with chronic pain. Their treatment would not be drugs or anesthesia but a powerful salve known to monks, sages, and rishis across the ages: moment-to-moment awareness. It's Kabat-Zinn who helped bring mindfulness—or deep awareness of the present moment—into the mainstream, secularizing the age-old practice and applying it as a practical tool for meeting the challenges of what it means to be human. Today, mindfulness is one of science's hottest research subjects—a pet favorite of laboratory luminaries like Richard J. Davidson, professor of psychology and psychiatry at the University of Wisconsin-Madison. In 2003, Davidson conducted a study with brain scans taken before and after subjects completed an eight-week training in mindfulness meditation. The "after" scans showed increased activity in the left prefrontal cortex, the center for feelings of calm and wellbeing. Davidson's subjects also demonstrated better immune function. Since this study, hundreds more have cropped up (a search on PubMed brings up over 900 records)—and mindfulness has made in-roads in the fields of cognitive therapy and psychological intervention with broad applications, from bipolar disorder to chronic fatigue syndrome.

The promise of stress reduction might bring people into the door of a classroom like Shaw's, but stress here is a blanket term for whatever it is that ails you. Embarking on the raisin journey with me are an 86-year-old woman facing the trials of aging, a teenager with pangs of insecurity, a middle-aged couple in the wake of a health crisis, and an empty-nester who feels mired in a sense of purposelessness. We think we're alone on our little islands of mental or physical pain, but we're not—that's one lesson from an MBSR class, and it's an important one. Like a survival guide, the course is presenting us with a toolbox of strategies including meditation, body scans, breath awareness, Hatha yoga, and plenty of knock-some-sense-into-you discourses from our instructor—in this case, a Bronx-accented septuagenarian who doesn't mince words. "When a tree loses its leaves, we don't say that it's fucked up. When a river is frozen, we don't say that it's broken. Yet we do these things to ourselves," says Shaw, a psychiatrist. "We're far harder on ourselves than anybody else would be. We need to give ourselves a break, because we're doing a better job than we think of being human."

Systematically, Shaw leads us back to what many spiritual teachers describe as the root cause of suffering: our whirling-dervish minds. Much of the time, our minds wander; we ruminate, we worry, we're anxious, we're regretting. We think about the past or the future—anything but the present moment. As a result, says Shaw, "We start to feel disconnected from the world. So we look for addictions to fill us, like food or sex or money, and we look for love to complete us. Disappointment comes in, because none of these strategies can work for long." Going back to the raisin, Shaw begins to tease out a world of observations—from the indentation where the fruit once connected to the vine, to the sun and the rain that helped it grow, to the lives of dozens of people involved in its harvesting and production, including the driver of the truck that delivered the raisin to the local store. "When you really pay attention, when you're really in the moment, you see that nothing is disconnected. It's all part of the order of things. In the moment, we're connected to everything."