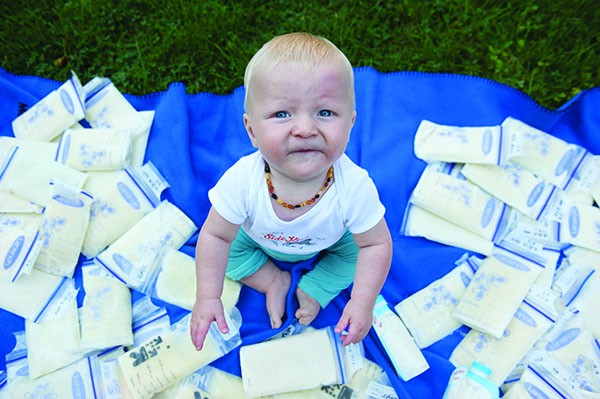 When Jed Ilany decided it was time to have a baby, he looked in Connecticut for an agency. He and his husband, Ben, live in Manhattan, but surrogacy isn't legal in New York. They were matched with Kim, a military wife with a young son who was putting herself through school. She had always wanted to help a gay couple have a baby. The Ilanys both fertilized an anonymous donor egg, and lucked out with a healthy transfer to Kim on the first try. About halfway through the pregnancy, Kim and the Ilanys were issued a pre-birth order so both Ilany dads would be on the birth certificate. When June was born last March, the nurses gave the Ilanys syringes of the warmed breast milk they had purchased to feed her.

The Ilanys' doctors, midwives, and pediatricians all agreed that breastfeeding is the healthiest start for a baby, but of course, the Ilanys couldn't do that alone. It was agreed that Kim would provide milk, but hearing and touching the baby stimulates those production hormones, and Kim didn't want to form a bond by breastfeeding and holding the baby. Knowing they might need supplemental breast milk, they sought guidance from the hospital. With a prescription from their pediatrician for 12 ounces of donor breast milk, they made their way to the Hudson Valley Milk Bank in Irvington.

Started in 2009 as the first community-based milk bank in New York, it's a storage and distribution site for pasteurized human milk from Ohio Health Milk Bank and the Mothers' Milk Bank of Northeast. Housed in the office of family nurse practitioner and lactation consultant Julie Bouchet-Horwitz, the goal was simply to make breast milk easily available to hospitals for premature babies. "We now have research that confirms preemies fare better on human milk," says Bouchet-Horwitz.

They handed out just 25 ounces that first year to parents sent by the hospital, coolers in hand, and demand rose each year. Eventually, Bouchet-Horwitz advised hospitals on getting their own storage and distribution licenses, which are free through the Department of Health. Because breast milk is regulated in New York State as a tissue (as opposed to a food in other states), it's not difficult to add to a hospital tissue license. Right now, there are 16 such licenses locally in the works. That means demand for milk from the Hudson Valley Milk Bank is going down, but Bouchet-Horwitz doesn't mind. "I opened the bank so hospitals could see the benefits. Now I'll just keep it open for my clients and the community." That might be the homebirth community or women who have had a mastectomy or breast reduction surgery. Soon, it will double as a depot for the future New York Milk Bank, the first comprehensive human breast milk bank in New York.

When Alexa and Abram Markiewicz's son, Asa, was born by emergency C-section at 26 weeks, just shy of 2 pounds, Alexa produced only drops of milk. The Markiewiczes knew that breast milk was ideal for Asa's delicate digestive system, but the NICU, where Asa stayed for over two months, would only allow him supplemental breast milk that was from a bank. The guidelines around breast milk are even stricter than blood, both in donor screening and in product processing. While there have been no reported cases of infection from breast milk, like any other bodily fluid, it carries pathogens. Donated milk from a bank is inspected, pooled with other donors, pasteurized, and then checked for bacterial content. "That's why there's been zero percent infection rate," says Bouchet-Horwitz. "We're feeding the sickest babies, so we can't take any risks at all." But at nearly $5 per ounce, the Markiewiczes felt it was cost prohibitive. Even though a newborn will only take 1-2 ounces each feeding, they're fed about five times per day. Tiny Asa only needed 2ml every 6 hours, so Alexa could keep up with that. But they knew, at home, Asa would need another option.

The Markiewiczes didn't have anything against formula, but never used it since they could get donated breast milk for free. Coworkers offered their babies' leftovers. At first, Alexa felt slightly disgusted by the idea until Abram pointed out that wet nurses have been around for several thousand years. They vanished around 1900 with advancements in the feeding bottle. They decided to research it. Alexa calls Bekki Hill the unofficial Milk Sharing Guru of the Hudson Valley. "Bekki taught me how to ship breast milk, the best way to bag and store it, sharing etiquette, suggestions for increasing milk supply, and she was available via text 24/7," Alexa says. "After about a month of networking, I had five consistent donors."

7 Cool Towns for Hipster Cats in the Hudson Valley

While You Were Sleeping: August 2011