Alongside Classic Upstate Produce, this Farm Collective is Working to Save & Seed the Flavors of India for Future Generations

While farm-to-table fans might expect to find beets, carrots, and kale growing near the Wallkill River, they are less likely to expect crops of the winter melons known as ash gourds, the leafy herb known as gongura, or the tuberous Himalayan black radish.

These traditional Indian vegetables, often hard to source in the US, grow alongside more commonly found produce at Gopal Farm, which is actually a network of three farms. There’s a 120-acre site in New Paltz, a 220-acre farm in Cape Cod, and an approximately 100-acre farm in Pine Island, Florida.

The farm complex is the creation of Nimai Gupta, who was a successful software engineer before deciding he wanted his life to be more meaningful. The process of self discovery led him to study farming in India and start farms that employed ancient farming techniques, ascribed to the sacred Hindu scriptures, the Vedas. 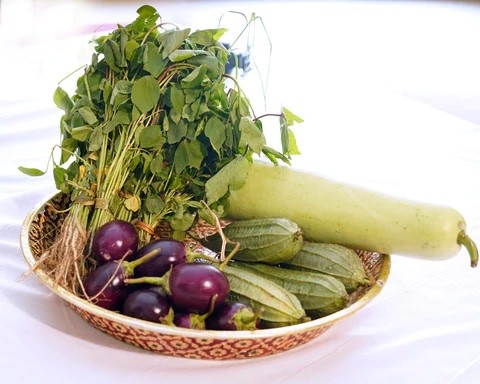 The farm uses traditional small-scale farming practices such as mulching and crop rotation with a strong focus on soil enrichment. That includes allowing cows to graze on the land, providing an all-purpose, low-nitrogen fertilizer in the form of cow dung.

“In addition to that we also use several different methods of composting,” says Bhargavi Ravi, who handles marketing for the farm. “All the vegetables on the site, things that are not sold, that are left over, everything is composted in layers.”

While the farm’s vegetables are cultivated according to ancient techniques they are also grown from heirloom seeds, which, according to Ravi, can further reduce chemical exposure. If plants are chemically sprayed in the process of germination, seeds may start out with a dose of chemicals, no matter how carefully the resulting plants are then cultivated. It’s not the only reason for using heirloom seeds.

“This is a very big topic—seed sovereignty as you call it,” says Ravi. “Many seeds that you buy right now are hybridized.” While a hybridized seed, created through cross pollination, might produce larger produce, it can do so at the expense of flavor.

“Ask your grandparents if the taste of the vegetables they eat now can be compared to what they ate before,” says Ravi. “Even if it is organic, the taste is missing. Heritage seeds that come from native vegetables have a higher nutrition profile and the taste is very good. So, we have something that your taste buds will tell you. If you taste an heirloom vegetable that’s grown in a place where multiple crops are growing, the taste is obviously going to be good. We went on multiple trips to different parts of India because we are not just growing the beets and the kale, the lettuces, and parsnips. The local vegetables are here, but our focus is on Indian heirloom vegetables.”

The enhanced flavor profile attracted the attention of New York City chefs, including Dan Barber, the chef behind the award-winning Blue Hill and Blue Hill at Stone Barns restaurants. Barber, himself the owner of a specialty seed company, snapped up the farm’s produce when their Indian vegetables were sold at the Greenmarket in New York City’s Union Square.

“They started selling these vegetables in Union Square Market and once they started selling, the response was huge,” says Ravi. “All the vegetables were disappearing in a matter of minutes. Dan Barber was there and he also encouraged many chefs in New York to try them and we supplied them.”

City chefs, now frequent customers, have enjoyed experimenting with the new flavor profiles. Take cucumbers. Why stick to one variety of cucumbers when you can try a half dozen?

“If you go to the regular store, it’s kind of monopolized,” says Ravi. “You see just one green cucumber or you see the long seedless cucumber, but there are multiple kinds of cucumbers. In the Indian subcontinent we have so many cucumbers that originate there and each is slightly different from the other and has its own different flavor profile.”

As well as growing heirloom Indian specialty vegetables and local produce, the farm also cultivates spices and Ayurvedic herbs from seeds harvested in India. By preserving ancient varieties that are quickly becoming obsolete—even in India—the farm hopes to preserve many of the aromas and flavors associated with traditional Indian cuisine.

They are in the process of producing ethical milk products sourced from a small herd of grass-fed dairy cows. “The cows are never killed,” says Ravi. “They are taken care of for life.” Gopal

Gopal Farm operates as a CSA, a community supported source of agriculture with a key difference. They deliver. “The produce from all of [our three farms] is packed in boxes and can be sent to anywhere in the US. This is basically farm-to-kitchen or as close as you can come.”

There are various farm boxes. Depending on interest, the box might offer organic Indian vegetables, plus standard organic produce. You can mix and match. There are other US-based farms that grow Indian food, says Ravi, but no one else delivers it.

“Our CSA is very distinct from a regular CSA,” says Ravi. “Because we have an online store and we open it up every week. So, say, for example, if you become a CSA member you will have a choice to pick regular things like carrots, beets tomatoes, kale, and potatoes, but if you wanted to, say, try a different cucumber—if you want to try making a pickle with it or try making a salad with it—you can buy just one cucumber and try it. So, you are not signing up ahead for boxes and boxes of Indian produce. You can just subscribe and pick and choose what you want.”

Experimenting with an orange Bhutan or curvy Kakdi cucumber might provide an interesting twist to your next farm-to-table meal.

“Our passion is to get people closer to trying,” says Ravi. “To get them to taste how entirely different the taste profile is for these heirloom vegetables.”