Good People at Half Moon Theatre

Out of the Past 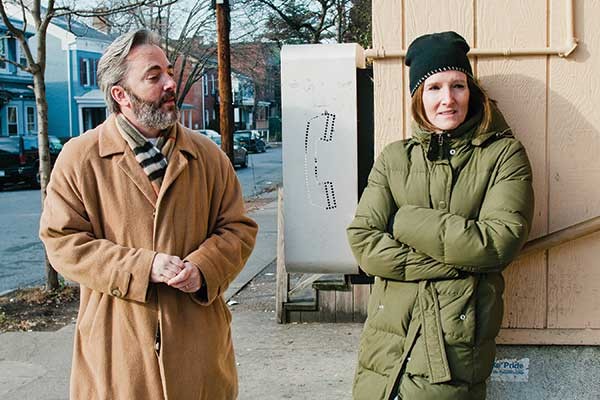 Not every working-class stiff attains the tragic dimensions of a Willy Loman. Meet Margie, a 40-something single mother living in South Boston. She is sullen, foul-mouthed, and uncontrite. And she's just been fired from the Dollar Store for chronic tardiness.

Margie is the central character in "Good People," the acclaimed David Lindsay-Abaire play. (Frances McDormand, playing Margie on Broadway, won a 2011 Tony Award.) "Good People" will have its Hudson Valley premiere March 15-24 by Half Moon Theatre.

"There are no real heroic people [in this play]," says "Good People" director Paul Kassel, "except in the sense of getting through day to day." While prone to self-sabotage, Margie has been bruised by circumstances that slyly win our sympathies.

Flawed antiheroes, drawn with both grit and heart, are at the center of Lindsay-Abaire's pieces, which include "Fuddy Meers" (1999), about an amnesiac housewife, and "Rabbit Hole," a wrenching study of a couple coping with their child's death. (It received the 2007 Pulitzer Prize for the playwright, then 37.)

Unlike his previous works, which flirted with surrealism, black comedy, and a sometimes-forced sense of absurdity, Lindsay-Abaire's "Good People" is a departure—"a supremely naturalistic play," Kassel says.

Margie's friends have a solution to her current crisis: Seek out Mike, a former high school boyfriend who left the neighborhood and is a successful doctor. Margie plans to hit him up for a job, but instead their meeting churns up memories of a shared past and an examination of how nature and nurture formed their lives. Here, Lindsay-Abaire deftly examines issues of class, race, and the vagaries of fate. But the truths that bleed forth in "Good People" are never heavy-handed and are dispensed with rueful humor.

South Boston, a brash, raucous, neighborhood bound by a fierce code of allegiance, dominates the characters in "Good People." Director Kassel, also associate dean in the School of Fine & Performing Arts at SUNY New Paltz, felt an immersion in that world was crucial for his actors. The director gave his actors details on South Boston life to help flesh out their characters and even sat them down to watch Bravo's new reality series "Southie Rules." A vocal coach instructed the actors on authentic Boston accents. But Kassel insisted the players reach beyond the dropped "r"s. "It's not about the dialect; it's about the human interaction," he says.

The overarching message of "Good People," Kassel says, comes in the form of a thankless and thorny question: What do we owe the people in our past? "We have a past, and that past is both a platform to spring into the rest of our lives and it can sometimes be a box that traps us."

The answer is not an easy one. Yet the playwright illuminates the dilemma with a marked, but never mawkish, humanism. "There is deep compassion to Abaire's work, absolving one another of guilt," Kassel says.

For dramatists drawing their stories from the American zeitgeist, more Margies may soon arrive on theatre stages; a January 2013 study confirmed that almost half of all US citizens, if suddenly jobless, would be three months away from poverty.

"The Fantasticks" at the Culinary Institute

It's A Wonderful Life