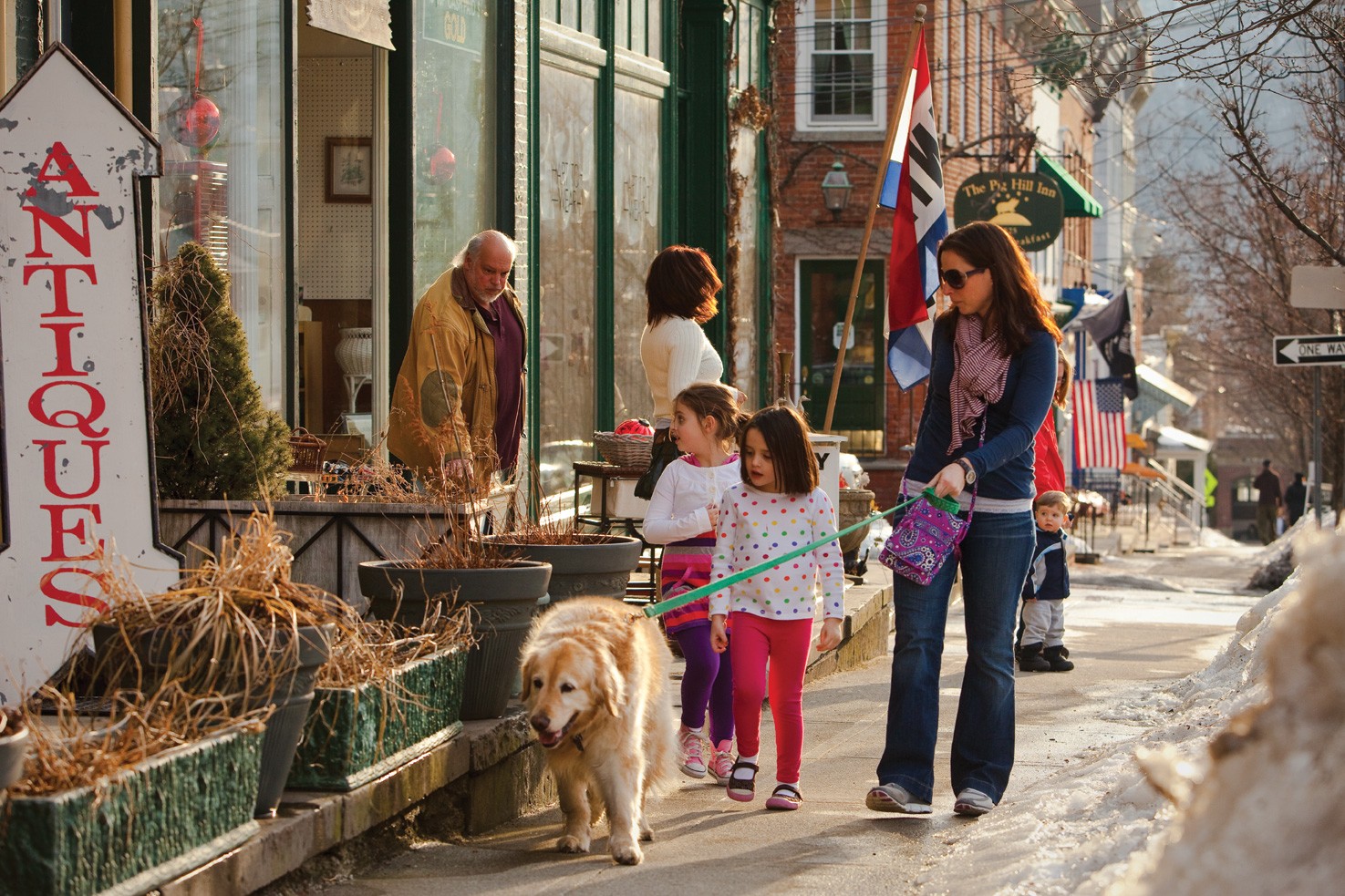 Before we moved to Cold Spring, my wife and I lived in Brooklyn. (This is actually a joke in Cold Spring, because if you moved here in the last seven years, there’s an 80 percent chance you moved from Brooklyn.) We had a beater car, an old Mercedes diesel that looked as if it had driven through a roadblock to get out of a city under siege—holes in the grill, the hood ornament gone, streaks of grime—and on the weekends we’d cruise two-lane roads, looking at the scenery and stopping for lunch. One day we found Route 9D, which hugs the river south of Beacon and heads through Cold Spring and Garrison. We must have had a moment of confusion as we drove past the gravel parking lots just north of Breakneck Ridge, where a throng of hikers walked along the shoulder to the trailhead to climb the steepest terrain in the Hudson Highlands. The dramatic rocky cliff is pierced by a narrow strip of asphalt, the tunnel itself so short as to give the impression that the ridge above it must be a veritable knife-edge of granite. I remember clearing the tunnel, and hitting the flat stretch of byway that hugs the shore of the Hudson and grants a view of Storm King and Crow’s Nest mountains across the water. It took our breath away.

We imagined, at the time, that the area must be full of railroad tycoons. Who else would have access to a place of such arresting physical beauty, devoid of the sprawl that plagues so much of America? This impression is enhanced by the long driveways and distant mansions of Garrison. Not so much the sweeping lawns and fences of Boscobel—that’s obviously public, with a big sign announcing the summertime Shakespeare festival—but the towering stones of Castle Rock perched high atop a hill certainly look imposing. Castle Rock was, in fact, the home of Illinois Central Railroad president William H. Osborn and his family. They also built another grand, rocky house nearby (now available for weddings) called Cat Rock. 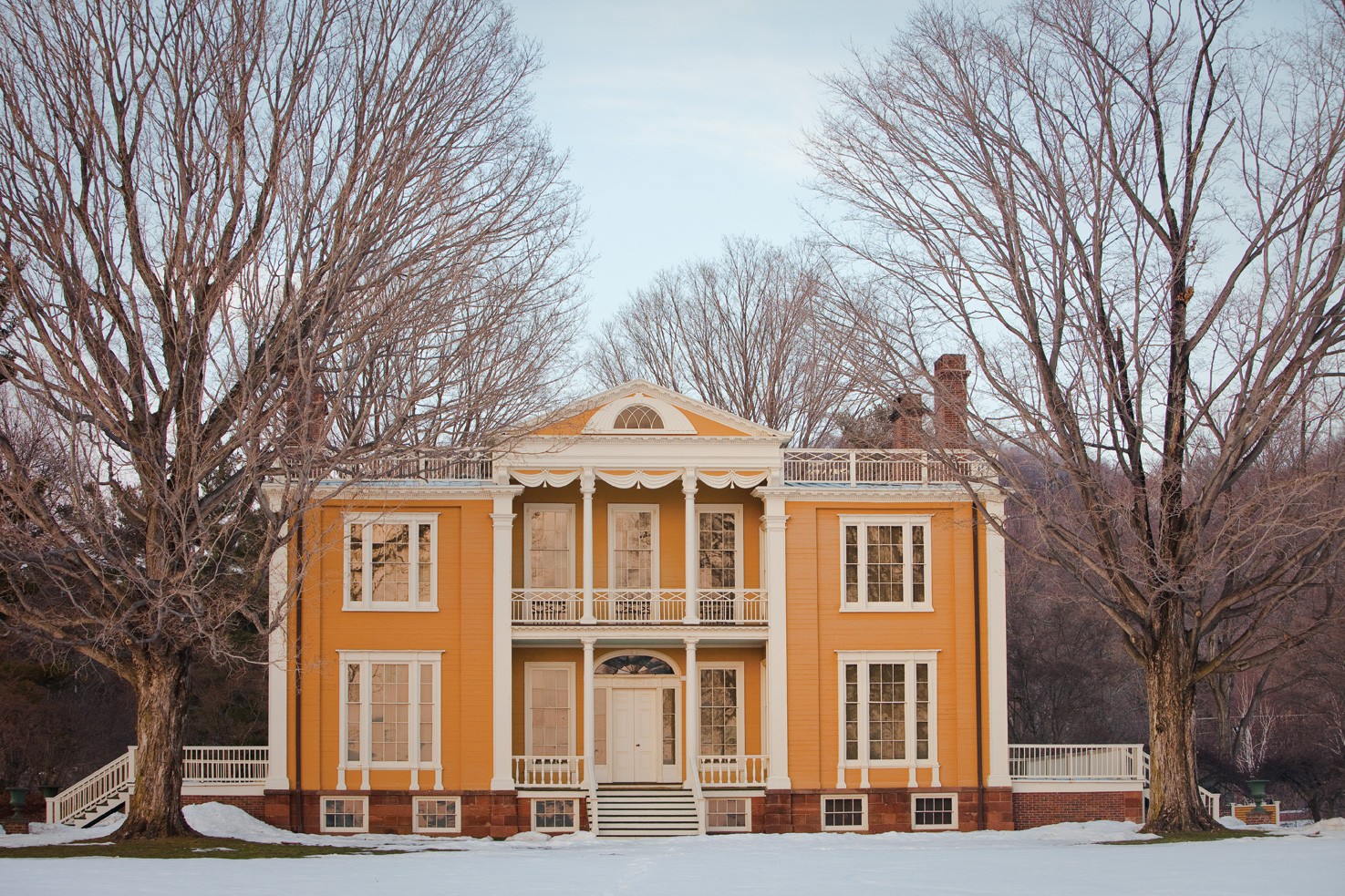 In Cold Spring, however, the houses are small. They are not extravagantly expensive. When we decided to move out of the city, we wanted most of all to live within walking distance of the train station, and we made that our highest priority. I work at home, but my wife works in the city, and we knew that her trip to town could define our life. Because of that, the vibe of the town was almost an afterthought, though it quickly enchanted us.

We’d come up to Cold Spring and eat at the Foundry Cafe on Main Street—a colorful and comfortable, veggie-chili-and-chunky-coffee-cup-type place where it was obvious that everyone knew one another. We’d grab a sandwich at the Italian deli next to Cold Spring Pizza and walk down to the river and eat on a bench, watching the boats rock at the Boat Club docks. I once came up alone on a chilly weekday in November, and the silence frightened me. You could have rolled a flaming tire down Main Street without affect. Mostly, however, we were excited: We’d walk the narrow streets and look at the tiny, 19th-century houses, with their faded paint and their muted colors. It felt like we’d found an American version of a town on the Cinque Terre. We’d honeymooned on that Italian coast, and that was basically the highest compliment in our quiver.

We wanted the physical beauty, and we loved the house we found (and still do). The train station was only blocks away, and we could walk to a Chinese take out joint (which we figured might ease the transition away from the city). But we knew very little about the community, and we were nervous about what we might find.

Cold Springer Sharr White (whose play “The Other Place” opens at the MCC Theater in Manhattan on March 11) expressed his former anxiety by pointing out to me that when he moved here from DUMBO with his wife and oldest child, they didn’t even know where to buy groceries: “We didn’t know where FoodTown was, that’s how completely unprepared we were,” says White.

Had he been nervous?

“About three weeks after our closing I was on a ladder at the top of my stairs wearing a ventilator and safety glasses, tearing our ceiling down, and I realized I had absolutely no idea what I was doing. Not just about home renovation, but almost universally. Suddenly all the debris around me might as well have been my life.”

They had another baby, and continued to work on their house, and eventually things clicked. Spring arrived. The Whites began going to the local playground: the Tiny Tots Park. Calling the Tiny Tots park a playground doesn’t do it justice. During the seasons I played there with my son—he’s part of the biggest kindergarten class the school here has ever seen—it was our town square, our commons. People donate toys—play castles, basketball hoops, tricycles, etc.—and money. It is cleaned up with a springtime jubilee at which we all rake it and pick up the winter’s detritus. “We realized,” says White, “that there were a lot of people in Cold Spring in almost identical situations. Now I love it.” 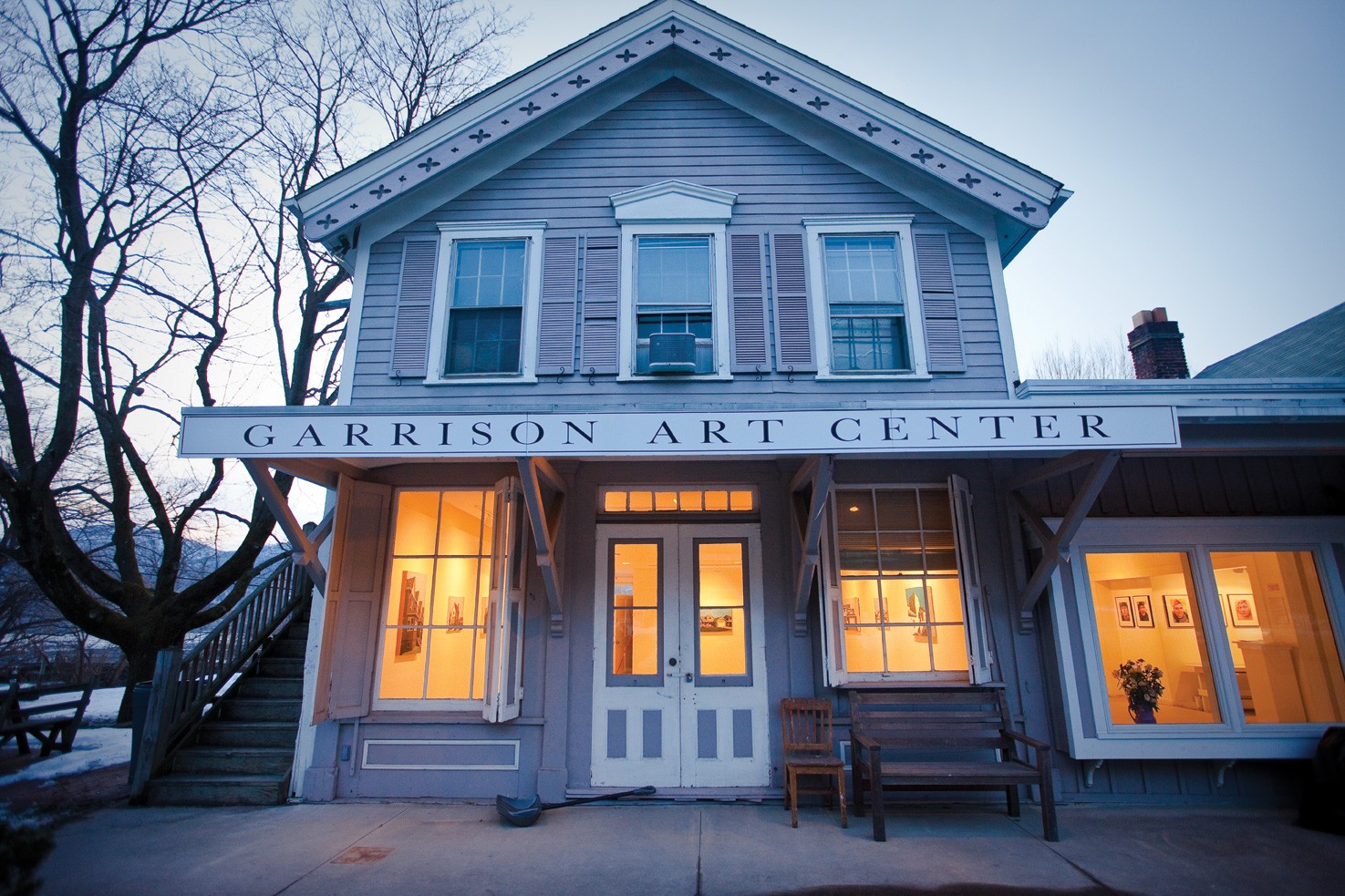 Even the commute to his day job can be a source of joy for White: “Just this morning I counted 12 bald eagles on the river ice from the train, and then 40 minutes later I was in Grand Central. Which I think is crazy and amazing. I think I’m just very, very lucky to be a part of this community. You can be at a party and see writers, producers, artists, directors, critics, foodies, farmers, musicians, cops, and the mayor. And on top of it, they’re all very down-to-earth, deeply interesting people. I’ve never been to a party as good as the ones I’ve been to in Cold Spring.”

I asked Cold Spring resident Brandon del Pozo, an NYPD precinct commander in The Bronx and a doctoral candidate in philosophy at the CUNY Graduate Center, what he thought made this community so special, and he recalled a realization he had while hiking in the nearby hills. “A short hike up Mt. Taurus gives you a sweeping view of Cold Spring,” he wrote in an e-mail. “A few years ago, I was looking down at the village and realized—eureka!—that one of the reasons it’s such a great place to live is because it has a housing stock that naturally excludes jerks. The type of moneyed person who has size and self-esteem issues can’t really find anything suitable in Cold Spring. Cold Spring, because it was built in a different time and is hemmed in by water and mountains, has reached an equilibrium that favors everyday people who want to be good neighbors.” 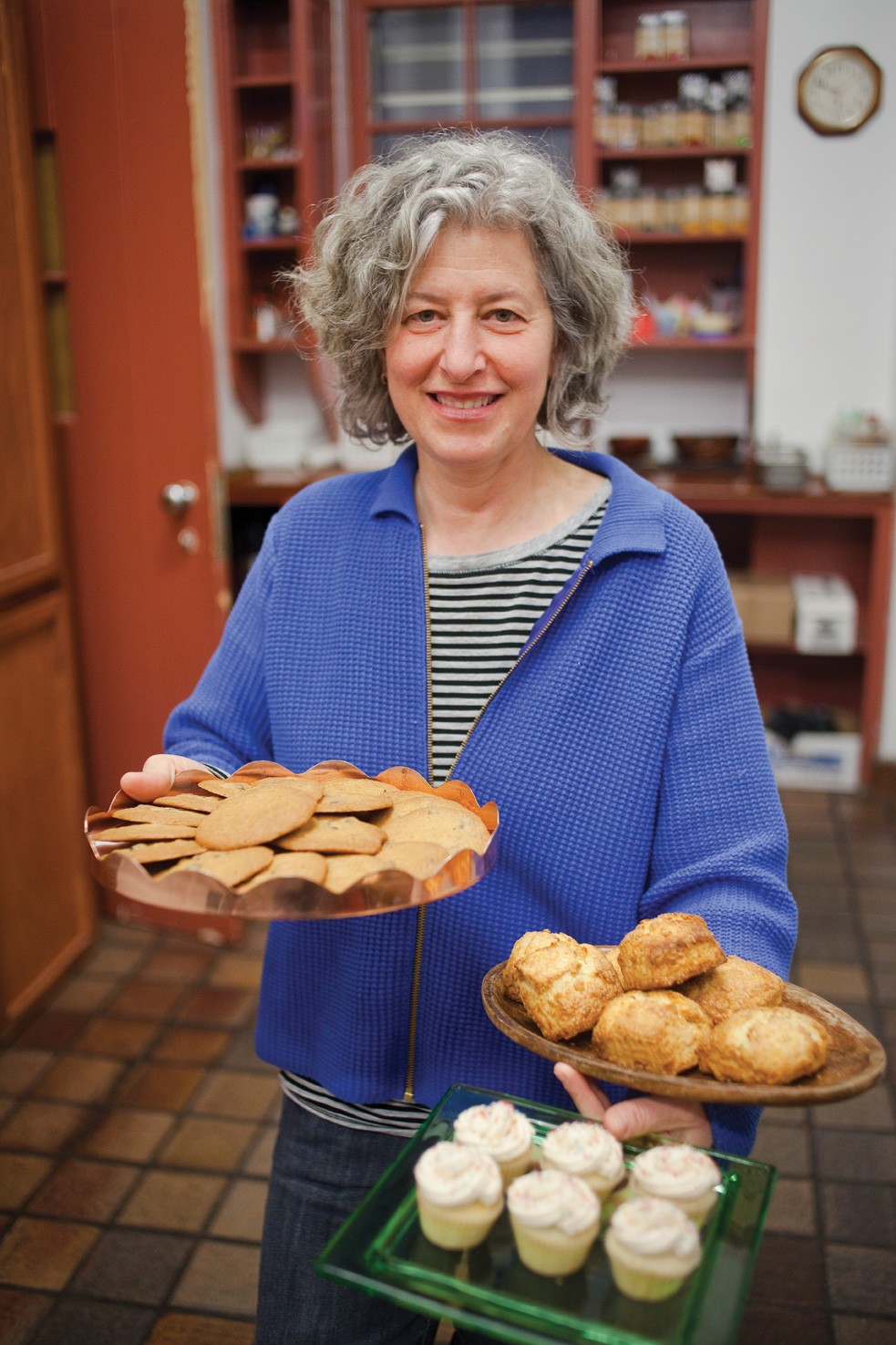 Rebekah Tighe grew up in Cold Spring and lives here still. She is a baker with a local caterer, Fresh Company, and during the warmer months she and writer/director Ivy Meeropol run the Sunset Reading Series at the Chapel of Our Lady of Restoration, perched on the bank of the river near the train station. Tighe was quick to remind me that those of us who came here from Brooklyn did not invent the town. Although it has a reputation as having been a tough, blue collar place, she describes it differently.

“The Chapel of Our lady was bought then restored in the 1970s.” She’s right: The Garrison Art Center held its 41st Fine Arts and Crafts fair last summer, the Philipstown Depot Theatre started in 1996.

“Throughout my childhood,” continued Tighe, “there was a bookstore and a variety store. We also had a smoky night club with live Jazz every Friday night and a dance studio where concerts were sometimes held. Pete Seeger was here as were lots of other artistic people. We have seen juice bars and health food stores and gourmet restaurants come and go for more than thirty years. My friend’s mother sat in a tree by the river all day once to prevent it from being cut down.”

She does think the town has changed, though: “The influx of people from the city has grown the sense of community here exponentially. The city folk who chose this small town have reinvented this community based on what they imagined small town life would be like.”

That means plenty of arts programs, and lots of local involvement in politics and the environment, a strong farmers’ market. It means a customer base to support the Riverview Restaurant’s Home Chef shop, tucked away in the back like a speakeasy and carefully stocked with superlative fish and meats. It means that Hudson Hil's—a sunny little restaurant with a shop that sells prepared foods and specialty items—is filled everyday.

A town in flux is bound to be a town with some tension—as covered in a recent issue of The New Yorker—and one sees grumblings in the Putnam County News and Recorder or on Philipstown.info about carpetbaggers.
Tighe doesn’t see it that way: “I just had 120 [transplants] in my house and I have the blown speakers to prove it. Do I love the old people? Yes, and I love the soil they walk on. Cold Spring has always been a little isolated, it has its own character and characters, I don’t see that ever changing.”


Max Watman’s Chasing the White Dog: An Amateur Outlaw’s Adventures in Moonshine, has just been released in paperback.