Alexandra Horowitz and Ammon Shea at Home in the Taghkanic Woods 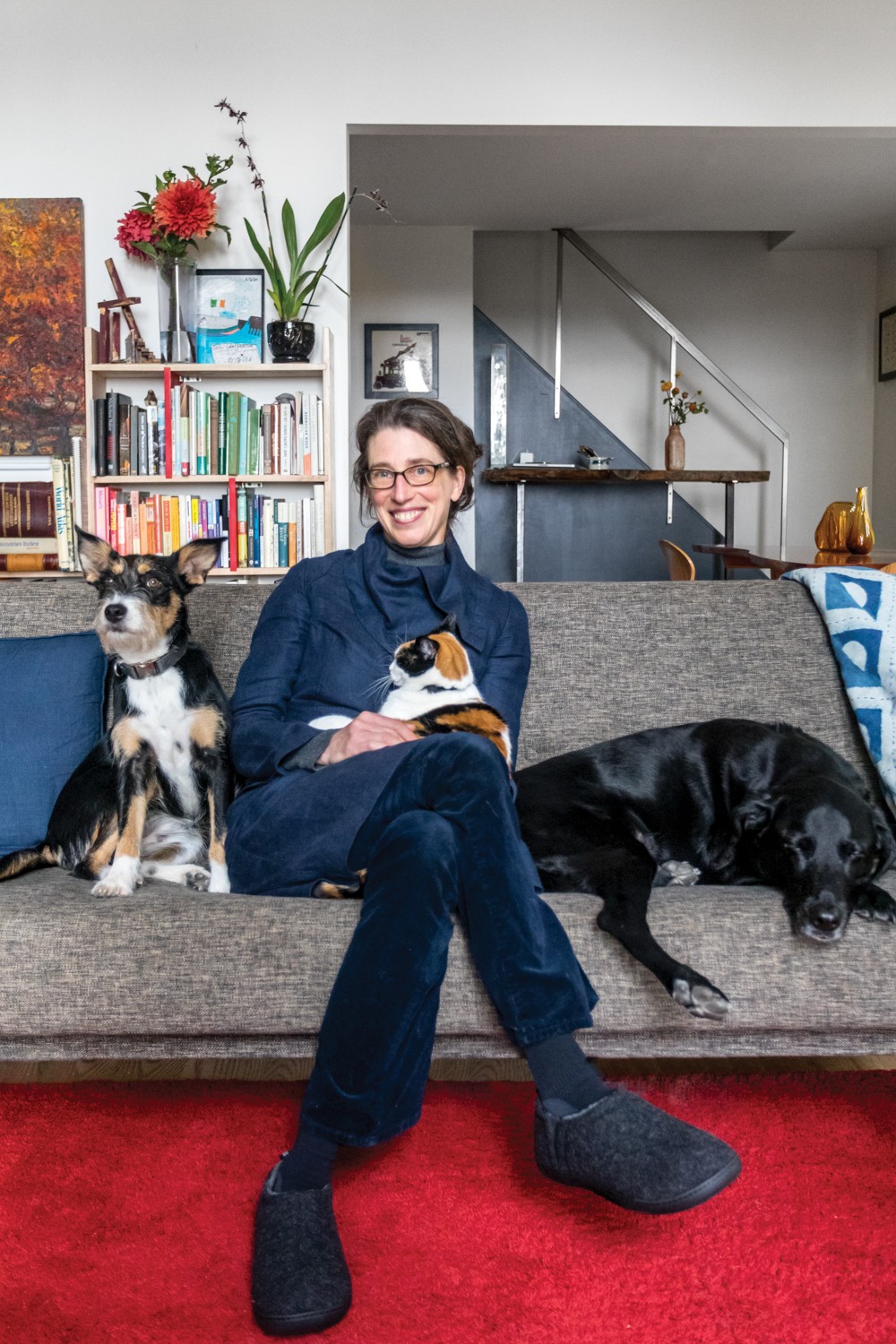 Alexandra Horowitz, her son Ogden, and their black lab Finnegan were walking through the woods near their house last year when they caught a glimpse of something wild. "We were coming down a hill and I saw what I thought was an injured dog under a tree," she says. Horowitz, a cognitive scientist, shares a forest-adjacent, modernist cabin with her husband, the writer Ammon Shea, their son, the family's two adult dogs, one puppy, and one cat. "I shouted a lot because I was concerned it was another dog and it might attack," she explains. "Then it ran away." Over the past two decades, Horowitz has learned a lot about dogs. Beginning in graduate school, where she researched dog play by observing her then canine companion Pumpernickel, she went on to write a popular series of books based on her research—most recently Our Dogs, Ourselves (Scribner, 2019)—and founded the Dog Cognition Lab at Barnard College. Part memoir of her life with her dogs, part scientific observation, her books all detail dogs' experience, perception, and conception of the world. And, while dogs are the main subject of most of her writings, her observations often lead right back to astute commentary on human behavior.

That day in the woods, after the strange dog ran, Horowitz and her entourage went to investigate the tree. They found a litter of coyote pups hidden in a cavity at its base. "They were probably one to two weeks old—they didn't even have their eyes open. I realized the mother was trying to get us to follow her." Not wanting to interfere, Horowitz and her band hightailed it out of there and then steered clear of the area for six weeks. When they returned, the den was empty, to Horowitz's relief. "There were no puppy skeletons. I'm sure she took them all and moved someplace else."

Horowitz's brush with the wild is an example of how the cognitive scientist's keen observation skills have led her to a deeper appreciation of the broader environment shared by humans and animals alike. Dogs have become a sort "bridge" species for Horowitz. In her quest to better understand and perceive the world through the eyes (and noses; mostly noses) of domestic canines, she has caught glimpses of the world often completely lost in the hustle of daily human life. "Just observing something for a little bit more than the ordinary amount of time you usually would, you see things that you didn't see before," she explains. "My work has given me the opportunity to open my mind and see things in the world that I'd stopped seeing. Dogs have opened up this complete other world for me."

The Scent of Home

It makes sense that her home, which is just as much a residence to the three canine inhabitants as it is to the three human ones (and the cat), would consist of a modest, 1,300-square-foot sunny and open shelter with spaces that easily flow from one room to the next, a very piquant pepper patch right outside, and 16 forested acres ripe with smells and threaded with paths for the exploring. Dogs primarily perceive the world through their extraordinary olfactory sense. "A space that's wrought by smell is a very different shaped space than one perceived visually," Horowitz explains. "Smells actually exist in a different way than light does, so the scene for dogs is not the same visual scene as it is for us, it's actually more fluid. Smells only reach their nose if they go exploring for them or if they arrive on the wind. It's like the fabulous landscape—we look out and think 'What is there to see?' They think, 'How does it smell?'"

As a whole, their property is one where each of its inhabitants can bask in their respective sensory enjoyments. A native of Colorado, Horowitz was living in Manhattan with Shea, their young son and their two older dogs, when they first considered a weekend home upstate. In 2011, they began renting a summer share in Pine Plains and completely took to the area. As a girl, Horowitz had spent summers at her grandparents' home in the Adirondacks and had grown to love the Northeast's rolling green hills and deciduous forests. "The Adirondacks were just somehow baked into me when I was a child," she says. Shea and Ammon wanted their son to have that same connection with the land, wildlife, and sky.

After renting a home in Hillsdale, they began searching for a place of their own and in 2015 they bought their wooded property. Built in 1972, and once the home to a family of seven humans, the two-story A-frame style cabin was a warren of smaller rooms surrounded by wild acreage. "We were so pleased it had a forest," Horowitz explains. "It was really exciting to get to know the seasonal element of it and the resident wildlife. It was something we hadn't fully experienced before—more than just while visiting." The property also included a separate writing studio adjacent to the garage for both Horowitz and Shea to work in.

However, in order to create a space that was as comfortable and appealing to the human members of the family, as well as the canines, the home needed some updating. Previous owners had added to the structure's original footprint with a west-facing great room under a two-story vaulted ceiling. A wall of four rectangular windows perfectly captures the view of the Catskills in the distance. "There is a very expansive view," says Horowitz. "The peak of the mountain is framed nicely."

To open up the interior space even further, Shea and Horowitz worked with contractor Kenneth Young to remove multiple interior walls, including the original front of the house, which was separating the great room from the kitchen and dining area. With Young's help, they also added multiple windows to the downstairs and completely updated the kitchen with a minimalist aesthetic. "We wanted to invite the outside in, visually," says Horowitz. They also updated the downstairs bathroom and then decorated the space sparingly. The result has been a space that physically flows freely from the open front of the house, through the kitchen and dining area, to their son's bedroom at the back—and visually flows between the interior space and the surrounding woods. "The design idea was not to get in the way of looking outside," says Horowitz.

Upstairs, the couple took a similar approach. By removing walls from what was once a bedroom, they created a loft space above the great room that serves as a second workspace. They updated the upstairs bathroom as well. At the back of the house, above their son's room, the master bedroom already featured multiple windows with views to the nearby trees.

The only exception to the minimalist, outdoor-indoor aesthetic that runs throughout the house is the family's extensive library—which includes multiple volumes of English language dictionaries. A lexicographic researcher, Shea is the author of Reading the OED: One Man, One Year, 21,730 Pages, among other titles. Both Shea and Horowitz have worked as "definers" and Shea has amassed a large collection of dictionaries. "I think I had a thousand volumes at one point," he says.

Last December, to further enjoy their property's outdoor space, the couple hired Caleb White of New Leaf Tree Services to design and build a standalone covered wooden porch right between their cabin and the nearby woods. Their new puppy, Quiddity, is another recent addition. Horowitz has known the dog since she was born and has been taking detailed notes on her development for a book detailing young dog development.

Next, the family plans to create a meadow of natural plants adjacent to the house. Designed to be an intermediary space between the domestic controlled environment of the house and the woods beyond, the meadow will also provide space for their three dogs to enjoy the outdoors without disturbing the wilder creatures in their midst. It will serve as a kind of bridge between civilization and the forest, which Horowitz and Shea endeavor to leave as untouched as possible—except for their daily dog and human walks. "It is really an honor to be able to live with animals," says Horowitz. "I think we sometimes forget."