The Need for Godspeed 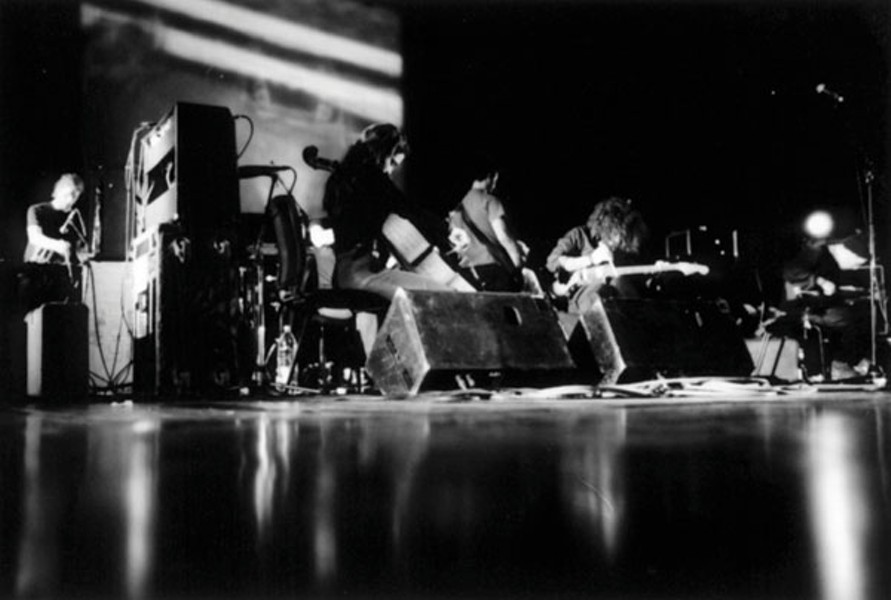 Godspeed You! Black Emperor will play at Basilica Hudson on September 20.
Godspeed You! Black Emperor has always been something of an enigma, the band’s music a complex triumph of sonic, mind-melting exploration, haunting samples, and inspired composition. After a seven-year hiatus, GYBE reunited two years ago for a series of shows, and on Thursday, September 20, they’ll perform at Basilica Hudson, a venue ideally suited for the group’s epic vibe.

GYBE has been hailed as champions of a genre called post-rock, but whatever post-rock means is anyone’s guess; it’s an application most often bestowed on groups for whom no other location in a record shop’s filing system would make sense. There are traditional rock ‘n’ roll instruments in GYBE, though the guitars and drums are often used in a darkly classical milieu. And with albums like the stunning Lift Your Skinny Fists Like Antennas to Heaven unfolding like a film soundtrack, or movements in an epic symphonic piece, where the hell else other than the chin-stroking, intellectually stimulating post rock section would a record shop keep it?

Rumors abound that GYBE has been recording new material, though at present their last album remains Yanqui U.X.O., the group’s politically charged 2002 full-length that featured a cover photograph of bombs tumbling out of a military plane, samples of then-President George W. Bush, and artwork linking major record labels to arms manufacturers. Heady stuff, but the music has always been grandiose and emotional, the stuff of fantasy and nightmares. Think the darkness and odd swathes of light in the music of the Velvet Underground, John Cage, and Swans. And, thanks to Karl Lemieux, a member of the group whose primary responsibility at live shows is bathing the stage in abstract experimental film projections, a GYBE performance is a totally immersive, singular affair.

They may not have a new album on the way, but it’s not unusual to hear new material at a GYBE show. Just don’t expect the crowd to sing along, whether they know the songs or not, because aside from the aforementioned samples, GYBE’s music is strictly instrumental.

Since regrouping, GYBE have rekindled a relationship with All Tomorrow’s Parties, the UK-based promoter behind I’ll Be Your Mirror, a worldwide series of small festivals with days curated by musicians. The group’s date in Hudson was planned as something of a warm-up to an appearance at the annual US version of I’ll Be Your Mirror, originally planned to be held in Asbury Park, NJ. But last month it was announced that the festival had been moved to New York City, and, with the exception of a few artists, would keep its lineup intact. After performing in Hudson and New York City, GYBE will continue their tour through the South and Midwest until mid-October, when they’ll presumably steal away into the night refusing to confirm whether a new album will ever materialize.

Basilica Hudson, a hollowed out 19th-century factory on Front Street, is a few dark turns off of Hudson’s main hub, Warren, on the waterfront next to the train station. The mammoth stone-faced industrial building, which has been the site of performances by such art-rock luminaries as Patti Smith and Sonic Youth’s Lee Ranaldo, is dimly lit and unheated, giving it a sense of the medieval. The various anterooms and vaulted gothic ceilings with intricately laced beams provide the perfect acoustics for GYBE’s atmospheric ebbs and echoes.
Basilica Hudson and Jean Deux present Godspeed You! Black Emperor at Basilica Hudson on Thursday, September 20 at 8pm. Tickets to the all-ages show are $15. (518) 822-1050; Basilicahudson.com.