Girls On the Run Fuels Girl Power in the Hudson Valley

Back in 2011, when Kim Quimby's older daughter was in third grade, she started talking in a way that her mother didn't recognize. "She would say things like, 'I'm not pretty,' 'I'm ugly,' 'I'm fat,' and I thought, 'Where is my child getting this?'" recalls the mother of two. "We don't talk like that in our house. We don't even have a scale." Quimby felt an intense need to research what was going on in our society and the forces that seemed to be damaging girls at such a young age. In one of her online searches about girls' self-esteem, she stumbled across an organization with the mission of paving a different kind of route through girlhood. It was called Girls on the Run, with "teams" nationwide, like Girl Scout troops, and a science-based curriculum that wove together running games with group activities designed to empower girls in grades three through eight. Each session in the spring and fall culminated in a celebratory 5K run where photos showed the girls' faces flush with endorphins and self-assured joy.

Quimby wanted some of that for her daughter, but when she reached out for more information, she found that her region of New York didn't have a Girls on the Run council. Based in Cornwall-on-Hudson, she was told that she'd need to start a council herself for the Hudson Valley area, a process that required a lengthy application, an attorney, and an accountant. "I had a career, a husband, two kids, a house—there was no way I could take on something like that," she thought initially. As luck would have it, several months later Girls on the Run connected Quimby with an interested mom in the next town who happened to be an attorney, and that woman had a close friend who was an accountant. "Everything started to fall into place," she says. The three women met monthly for a year, and they launched Girls on the Run Hudson Valley in the fall of 2012. That inaugural season produced two teams with 20 girls total—12 in Cornwall and 8 in Newburgh. Fast-forward six years later, and the regional organization now reaches nearly 2,000 girls a year in Orange, Ulster, Dutchess, Putnam, Westchester, and Rockland counties.

"That first season was an incredible experience," says Quimby. "The girls would run up to me so excited, 'Coach Kim, what are we going to do today?' They were so enthusiastic about the lessons, the activities, the running. Everybody wanted to do more and more." After two years coaching, she quit her corporate communications job to devote herself full-time as the executive director of Girls on the Run Hudson Valley. Her older daughter is a sophomore in high school now, and Quimby doesn't know most of the kids registering today, but the experience still tugs at her heart. "Every time we get to that 5K at the end of the season, I have tears in my eyes because these girls are crossing the finish line joyfully, arms up, so proud of themselves at what they've accomplished. It's an awesome thing to see."

Breaking Out of the Girl Box 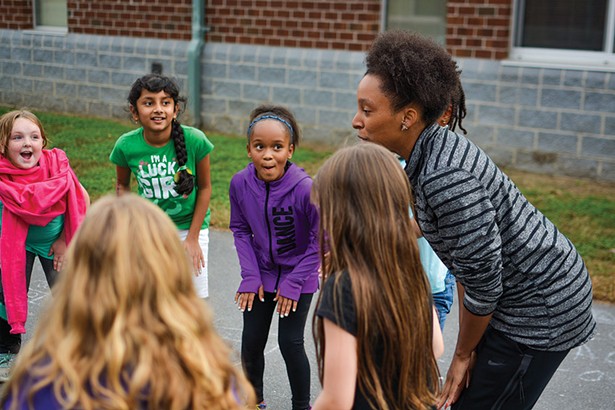 Girls on the Run started in the 1990s as the brainchild of Molly Barker, a four-time Hawaii Ironman Triathlete and recovered alcoholic who had hit rock bottom a few years previously and felt like running saved had her life. During a run one day, Barker had an epiphany that she had grown up living in the "girl box"—a trap that many girls fall into in their adolescent years, when perceived societal expectations seem to push girls into obsessing over their looks, bodies, popularity, and other outward qualities. When she was running she felt free, and she wanted to help young girls in particular to untangle from the cultural stereotypes and pressures that hold them back and keep them from realizing their full potential. Girls on the Run started with one team of 13 girls in Barker's hometown of Charlotte, North Carolina, in its first season. The idea caught fire, and it steadily grew from coast to coast; in 2015, the program registered its one millionth girl.


You don't have to be a jock to do Girls on the Run; instilling a love of physical activity in girls is just one piece of the larger picture. "We're not trying to build world-class runners here," explains Quimby. "Our mission is to inspire girls to be joyful, healthy, and confident using a science-based curriculum that creatively integrates running. More than anything, we want to help strengthen their inner spirit and celebrate what makes them one of a kind." Part of that mission is showing them that they can achieve their goals and feel good—for example, the 5K event at the end of the season. "You set a goal, you work towards it, and you can accomplish it, and that's all going to build your confidence. It's not about being competitive; we're celebrating everybody. The girls' abilities are all different. Some girls will only walk, and that's okay. Our motto is 'You can walk, run, skip, or hop.' You just have to keep moving forward."