Girls Are Doing It for Themselves | Comedy | Hudson Valley | Chronogram Magazine

Girls Are Doing It for Themselves 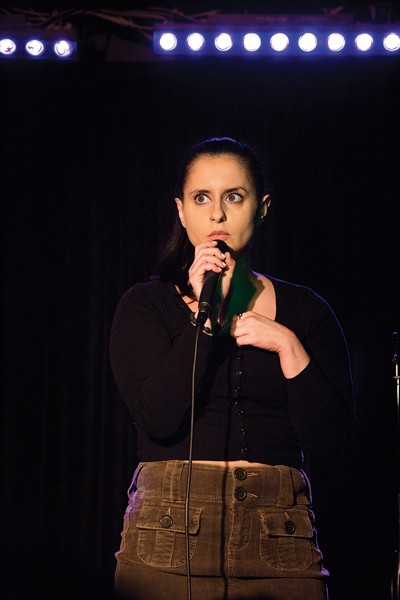 Comedian Corinne Fisher claims she's shy and anti-social. This seems odd for someone who willingly details her sex life on the anti-slut shaming podcast "Guys We F#@$!d." "I've slept with a lot of people," says Fisher, "but not for the superficial reasons that many people believe. I did it for myself. I like to have sex. I think if everyone was a little more selfish, they'd be better off." Candid life advice is part of what one can expect to hear in her stand-up performance at Market Market Café in Rosenddale this month on March 12.

Fisher's uninhabited honesty led to the creation of her podcast, which features Fisher and fellow comedian Krystyna Hutchinson, exploring their relationship to sex by an unconventional approach; interviewing guys they've slept with. Fisher claims that the intention behind the podcast isn't to coerce women into talking about their sexual experiences in the explicit way she does, but rather to open the doors for females to be more vocal about sex in general. Fisher believes that "sex should be a priority in every relationship or otherwise your partner doesn't differentiate from a friend. "Guys We F#@$!d" encourages women to be more frank in their sexual desires.

Since the podcast began two years ago (now boasting over one million listeners), the show has moved into discussing more broader issues in relation to sex––topics ranging from abortion, the porn industry, and interviews with famous figures such as Amber Rose, Stoya, and comedian Dan Savage. What's most appealing about Fisher's presence on the show is her equanimity. In each episode she often lets men rant about their own experiences and ideas on women and sex––often spouting misogynistic ideals. However, she never dismisses them. She lets these men openly state their opinions without any objections, which in turn allows for a more substantial dialogue. Fisher claims that no people or topics are off limits. She would love to interview a man accused of molestation, "If you humanize someone with an unpopular opinion, especially a criminal, than you can understand the problem better and hopefully know how to change it."

Fisher considers herself a "political and aggressive comedian" and tries to veer away from discussing sex and relationships in her work outside of the podcast. She most recently has been involved in a monthly self-written show at the Standing Room in New York City called "The Comedienne Project" alongside comic Katie Hannigan. The piece encompasses 20 minutes of comedy where the discussion of sex, dating, and relationships are completely off limits. Though she has drawn most attention from "Guys We F#@$!d," Fisher has an impressive resume for a young female comedian, who started out as a film student at New York City's School of the Visual Arts, including an appearance on FOX's Laughs on the special "Under 30" Episode, a segment on Last Call with Carson Daly, and a numerous amount of personal projects including a show at The New York Comedy club called "Nacho Bitches" with fellow comedian Blair Socci. Fisher attributes her success to her gender identity in a male-dominated industry: "I'm a minority and I stand out more. Audiences are refreshed when they hear my voice because I have a different perspective." Fisher will be performing at Market Market Café in Rosendale on Saturday March 12 at 10pm with dinner reservations starting at 8:30 pm. Tickets are $15 (cash only). (845) 658-3164; Marketmarketcafe.com.