A Chance to Chant 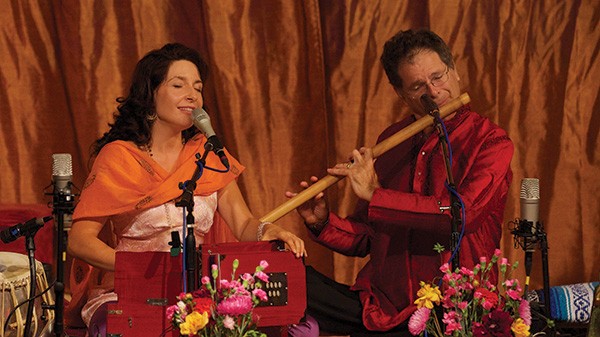 The ancient Hindu devotional practice of kirtan is one of ecstatic call-and-response chanting designed to transmit an overall feeling of gratitude and the joy of simply being alive for both its performers and audience. For ages, it was only the traditional Indian instruments of tabla, harmonium, karatalas (hand cymbals), and double-headed mrdanga or pakhawaj drums that accompanied kirtan's chanted hymns or mantras. The bansuri flute has not been known as a standard kirtan instrument, but over the last few decades bansuri virtuoso Steve Gorn, who will accompany singer Gina Sala and tabla player Daniel Paul at the Wild Woodstock Jivamukti Forest Sanctuary on April 17 and Sadhana Yoga on April 19, has been changing such preconceptions.

"It's true that the root instruments of kirtan don't include bansuri," says Gorn, who began his musical career as a jazz saxophonist in thrall to the Indian-influenced sounds of John Coltrane and Charles Lloyd. "Which is ironic, since [in Hindu teachings] Krishna played one and in Indian folklore the sound of the flute is a powerful thing. It's said to lead people to leave their spouses or quit their jobs." In 1969, though, that same sound led Gorn to Calcutta to learn directly from Bengali bansuri master Sri Gour Goswami. He continued his Indian music studies with another bansuri giant, Pandit Raghunath Seth, and became influential himself by incorporating the indigenous bamboo instrument into Western styles. Over the decades the Accord resident has worked with Paul Simon, Richie Havens, Paul Winter (2010's Grammy-winning Journey to the Mountain; Living Music Records), Jack DeJohnette, Glen Velez, Deepak Chopra, Krishna Das, and others.

The Seattle-based Sala is well known as the erstwhile lead singer of Cirque du Soleil. A composer, teacher, and kirtan leader with a repertoire that boasts 23 languages, she has performed in venues ranging from "huts on several continents to the UN," and began chanting at age three while living in an ashram. While wandering the Himalayas she immersed herself more fully in the practice and has studied at a Buddhist monastery and with Sanskrit, tantra, and Indian classical singing teachers. Sala now conducts private sessions, retreats, workshops, and kirtans internationally, and leads her successful "River of Sound" tours in India. Paul was mentored by Ali Akbar Khan and performed at Carnegie Hall with the tabla master and his fellow Indian classical legend Ravi Shankar.

"What makes kirtan so popular is that it's participatory," Gorn explains. "For many it's not so much about religion but more about settling the mind. It creates a synchronicity between music, body, and mind."

Gina Sala will lead kirtan with Steve Gorn and Daniel Paul at the Wild Woodstock Jivamukti Forest Sanctuary in Shady with the duo Sri Kirtan on April 17 at 7:30pm. Suggested donation is $15. For information, visit Jivamuktiyoga.com/centers/wild-woodstock-jivamukti-forest-sanctuary. Sala, Gorn, and Paul will again perform at Sadhana Yoga in Hudson on April 19 at 7pm. Admission is $15. Sala will also conduct a chanting and harmonium workshop at 2pm. Workshop only is $20. Admission for both kirtan and workshop is $30. For information, call (518) 828-1034 or visit Sadhanayogahudson.com.