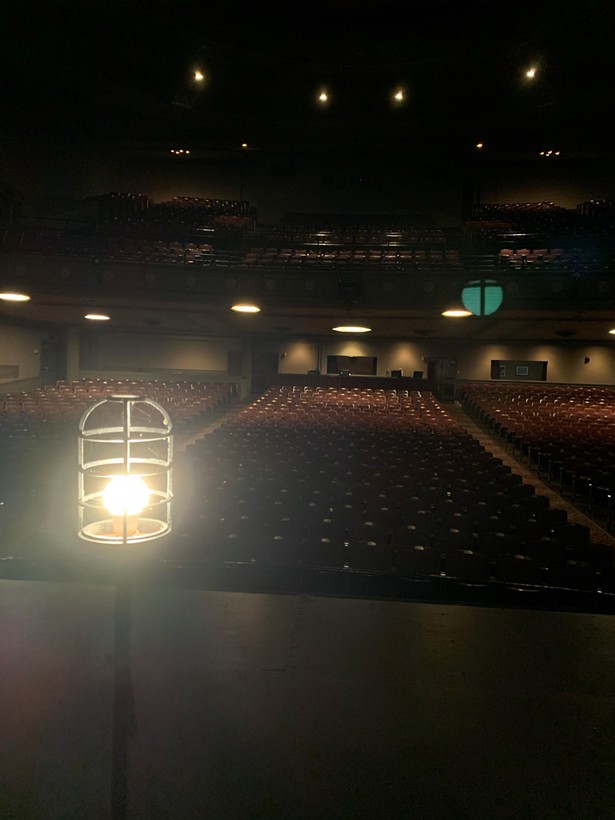 First it was no gathering larger than 500, and the lights of Broadway went dark. Soon the number was 50, and our favorite gathering places—the venues that, in normal times, bring us a steady stream of world-class performance—had to call off everything for the duration. It’s unprecedented, unnerving, and a major blow to our region's financial and cultural economy. And with no one sure how long the situation will last, Hudson Valley venue owners are doing their best to tread water until the time comes that they can once again swim.

“9/11 was a very painful, difficult and uncertain time for everyone, but this is something else,” says Chris Silva, executive director of the Bardavon. "Our archivist is looking for what was happening in Poughkeepsie and Kingston during the flu epidemic of 1918."

Aside from its namesake, the Bardavon 1869 Opera House, the Bardavon organization includes Ulster Performing Arts Center and the Hudson Valley Philharmonic—a lot of moving parts have ground to full stop. There are 21 full-time employees, 100 part-timers (including 70 Philharmonic musicians), and 100 ardent volunteers involved, and Silva says it’s surreal to go from managing their busy-ness to worrying for them. “It’s all so weird,” he says. “Less than a month ago the HVP backed Jane Birkin, Charlotte Gainsbourg, and Iggy Pop at the Beacon Theatre. Packed house, great show and we all felt inspired and lifted up, and now all those artists are unemployed! The impact is overwhelming. So we’re upset for all of these people as well as all the businesses we work with, especially the restaurants we fill with every show we present. We’re trying to figure out ways to help and how we can all go forward.”

That’s the question on every mind, of course. Venues that serve food and can do takeout are relying on their meal service as never before. “We’re open for takeout and offering delivery, and we’ve discounted all our food,” says Phil Ciganer, owner/operator of the Towne Crier Cafe in Beacon. “We have an in house pastry chef and with a $25 order, you get a free dessert. And we have 20 percent off all food right now.

At Daryl’s House in Pawling, food is also the current mainstay. “We're running curbside takeout at the club," says general manager Patrick Ryan. "The food is great and it enables us to keep our kitchen as busy as possible during these times.” Daryl’s House, the passion project of musician Daryl Hall, has been recording sessions all along and has a library of past performances available for free online.

Other places are exploring the possibility of virtual content as well. “A few artists have already reached out to us, expressing an interest in doing live streaming,” says Tony Falco, owner of The Falcon in Marlboro.  “I'd love to do moderated shows that let you meet the performers in a live interview. How cool would it be to listen to a live talk about life in these crazy times with people like David Amram, Brad Mehldau, Willie Nile, John Simon, Joe Louis Walker, Kurt Rosenwinkel—as well as hear them perform? Thinking of using Big Joe Fitz as my moderator—he is insightful, while so relaxed and simpatico.”

But the logistics are daunting, especially in places like these that have set themselves a high bar for acoustics and audience experience. “We would need to turn the Falcon into a movie studio and do multiple camera shoots. It would not be worth it unless we had great equipment, which we do not have,” says Falco. “My concerns are putting out high-quality audio and video in real time and making it worthwhile for those involved. I just don't think there will be enough money to be made from a streaming service. It might be different now that people can not go out, but most everyone will be broke and hurting soon. Truthfully, now is not the time for me to be spending money that I don't have on video equipment and hiring people to run cameras.”

Venue management has also had to face the daunting task of reaching out to the many who’d already bought tickets to now-postponed or outright cancelled shows. "It is amazing that in less than two weeks, our tireless box office staff has been non-stop calling 20,000 ticket holders alerting them of changes in all our shows through June," says Silva of the Bardavon. "That has definitely never happened before.”


"At this time we have let go all our box office, concessions, and assistant technical directors staff. We are holding onto six full-time staff, but that too may change sooner than later. Never seen anything like it," says Kevin Archambault of the CENTER for Performing Arts at Rhinebeck. The theater has cancelled its staging of "Shakespeare in Love," "Pippin," "Barefoot Dance," and "Aladdin.” “We have hopefully (if we truly open up again in 30 days) postponed 'A Midsummer Night’s Dream' and 'Celtic Heels,' but the word on the street is we won’t be open for 45 to 60 days. Which, to many small ,local businesses, is terrifying.”

If there’s a saving grace at play here, it’s that those concerned with this aspect of the rolling catastrophe are a resourceful bunch. Artists and others will be teaming up for The Bardavon/UPAC/HVP “Ghost Light Minute” on social media.

At Kaatsbaan, the world-class dance park and academy in Tivoli, artists who were scheduled for residencies are being highlighted with dance content that is being shared on multiple social media platforms, as well as “virtual masterclasses” via Zoom for students who were previously enrolled in Summer Intensive. Kaatsbaan is working on plans for offering virtual dance classes to the general public as well.

It’s that same public that will ultimately determine whether the region's beloved venues have been forever shuttered or just put on pause. Tickets for postponed or cancelled events aren’t just worthless paper, they’re your vote for the survival of all concerned. “We encourage people to hold on to tickets they purchased for postponed shows until we start up again,” says Silva. “Or instead of asking for a refund, make a donation or take a credit for a future show. Refunds really hurt us, and happily most people are holding on to their tickets or making donations. It’s encouraging.”

Getting things rolling again will be a challenge on several levels. “I’m hopeful that when the time to reopen does occur, consumer confidence doesn’t take too long to catch up as I would imagine venues will be one if the last businesses to be able to return to 100 percent normal operation,” says Trevor Dunworth, manager, owner, and talent buyer at BSP Kingston. "In my opinion, touring artists that are used to demanding substantial guarantees from venues will need to be flexible in their payment structures and realize the venues really need their support at this time to rebuild their foundations. Only time will tell how many venues will be able to carry on the longer this shutdown lasts.”

If only one thing is certain, though, it's that this hiatus won’t last forever. And for those who find a way to hang in there, there will be an opening night without a dry eye in the house, regardless of content. “The artists we booked from March through June are all rescheduling and have been extremely cooperative and flexible, so hopefully they will all be back and healthy,” says Silva. “When we get there—Mind blowing. Not just for staff, artists and volunteers, but for our dedicated audiences and donors who love experiencing a world-class performance in our gorgeous, historic theaters. There’s nothing like that connection, and we all miss it profoundly right now."