Get it On | Books & Authors | Hudson Valley | Chronogram Magazine

November 24, 2008
Last Updated: 08/13/2013 3:46 pm
comment
It’s two days after Barack Obama’s landslide, and leftists of every description are wafting around in a grinning daze. David Rees, whose scathing political comic Get Your War On lit up the Internet and Rolling Stone throughout the Bush regime, was not taking chances.

Rees points to a copy of Get Your War On: The Definitive Account of the War on Terror, 2001-2008, just published by Soft Skull Press. His cover design features a blue field with white text in its upper left quadrant, the rest of the page striped with comic strips printed in trademark red ink. “Can’t burn it. It’s an American flag,” he says, tapping his head sagely. “That was my Palin insurance.”

The iconoclastic cartoonist has suggested a 10am meeting at Beacon’s Muddy Cup coffeehouse. His lanky frame, in baggy sweater and hiking boots, sprawls on an acid-green velveteen couch. He appears to be not quite awake, which might make one wonder why he chose this time. “I always do that. I schedule these early morning interviews so I’ll have to get up, and then I’m half asleep,” he apologizes, adding, hopefully, “The coffee’s starting to kick in.”


Get Your War On was launched on the Internet less than a month after 9/11. Its opening salvo:

Man on phone: “Oh yeah! Operation: Enduring Freedom is in the house!”

Man at computer: “Oh yeah! Operation: Enduring Our Freedom is in the motherfucking house!”

Man on phone: “Yes! Operation: Enduring Our Freedom to Bomb the Living Fuck Out of You is in the house!!!”

No one was writing like this in October 2001. The nation was still shell-shocked, confused, and paranoid. Rees’s public assertion that the war on terrorism and invasion of Afghanistan deserved a good profane bash was a breath of fresh air. Using a handful of anonymous-looking clip-art figures, he tapped into collective anxieties and taught them to breathe comic fire.

Get Your War On (GYWO to fans) quickly developed a cult following, and in 2002, Rolling Stone picked it up. Rees was anointed a generational mouthpiece. Better yet, he was able to quit his day job.

His clip-art comics career had begun with a deadpan volume called My New Fighting Technique Is Unstoppable (rereleased in 2003 by Riverhead Trade). Rees was then still in his twenties, a Boston-based musician who fronted a band called the Skeleton Killers and worked as an office temp at Tufts University. During the summer, he combated boredom by fooling around with PowerPoint clip art. Though he had no interest in martial arts (other than Wu-Tang Clan lyrics), he liked the karate figures. He created a loopy series of strips, which he Xeroxed and stapled into books for his friends. They encouraged him to bring a stack to a local comics store, where, to his astonishment, total strangers bought and enjoyed them as well.

Rees followed up with an equally idiosyncratic comic devoted to cubicle workers, My New Filing Technique Is Unstoppable. He and his wife, child psychologist Sarah Lariviere, relocated to Brooklyn, and he found work as a fact-checker for Maxim and Martha Stewart Living. “I was checking the same stupid things for both magazines: ‘How much did your belt buckle cost?’ ‘For the wedding at Country Bumpkin Golf Course, the main course was mashed potatoes with chicken gizzards?’”

Then the Twin Towers fell. Rees needed a vent for his anger and fears, and he found it in clip-art. “I didn’t want kitsch—the ironic ‘square’ guy with ’50s glasses—we’ve all seen that before. I wanted the art to be really banal and almost invisible.” He used a Dover Clip-Art file called “Office Situations,” drawn by paper-doll king Tom Tierney. (“I’ve never met him,” Rees says. “I’d like to shake his hand.”) The figures’ names are generic identifiers—Notebooks, Black Guy, Lady; Rees never renamed them.

“They aren’t characters in my mind,” he explains, “There’s no backstory or consistency to what they say.” Rather, the figures serve as mouthpieces for a wide variety of political views. “Who says what is very random—honestly, it’s, ‘Which piece of clip-art haven’t I used in a few weeks? Okay, this guy’s on deck.’”
Rees now makes GYWO animations for www.236.com, and is retrofitting his characters with personalities, so the actors performing the dialog know who they’re playing. It’s not the first time actors have tackled his work: Austin theater company the Rude Mechs adapted Get Your War On for a stage production that later won an award at the Edinburgh Festival. Rees was especially pleased that the Rude Mechs “used overhead projectors they bought at an Enron fire sale” to integrate clip art, animations, and news photos.

Rees uses the same technology when he does readings. He donated all his royalties from the first two GYWO anthologies to Adopt-a-Minefield, and during those book tours, he often showed footage of the de-mining procedure. He’s keeping the royalties from the new book, though, partly because of his recent move to Beacon. “I have a mortgage now. And I gave away over $100,000, so I think my karma’s okay.”

Ethical questions loom large for Rees, who was raised by “really religious” parents in Chapel Hill, North Carolina. As a teenager, his main influences were “church and political punk rock like the Minutemen. It was the ’80s, the Reagan era—our church had pamphlets about Central American proxy wars, nuns getting killed. The Minutemen had the same moral concerns, but the language and aesthetics were more dynamic and profane,” he says, adding that he sees GYWO as “a Minutemen song in comics form.”

Rees plans to end the strip on the day Bush leaves office, but he’ll keep it alive through the lame-duck months. “If he can stick it out, I can stick it out. We can ride into the sunset together. I’ll get a job burning books in his Presidential library.”

Is Barack Obama funny? “It won’t be my job to figure that out. I’m done. But people in my field—left-wing cartoonists—are kind of wondering that,” he admits. “Obama seems pretty centered, comfortable in his own skin—there’s no glaring psychological fucked-upness to work out on the job. Clinton had this pathological need for everyone to love him, he had to seduce everyone. Bush has all these unresolved daddy issues, and he’s a dry drunk. I’m tired of living in a country where I had to pay the price for these dudes’ psychological problems. I would like America to be run by a boring person. I hope Obama’s totally low-key. I hope the excitement’s over, and we get four years of smart decisions.”

Rees’s post-Bush comics include Relationshapes, which explores the complex thoughts of crudely drawn geometric shapes, and Adventures of Confessions of St. Augustine Bear, which pits an inept clip-art hunter against a beatific bear and other wildlife, including a buffalo, penguins, and a strutting turkey who muses, “Should I believe in God, or what?”

He’s also developing a proposal for a “totally apolitical” prose book, which he describes as “an ironic self-help book. People will think I’m making fun of self-help books, but by the end, their lives will be totally better. That’s my pitch.”

David Rees sips his coffee, now fully awake. “My new book is the 21st-century Confessions of St. Augustine. The goal is not a bestseller. The goal is sainthood.”

David Rees will read selections from Get Your War On and sign copies of his latest book on December 6 at 7pm at Open Space Gallery in Beacon. (845) 765-0731;www.openspacebeacon.com. Rees’s website: www.mnftiu.cc. 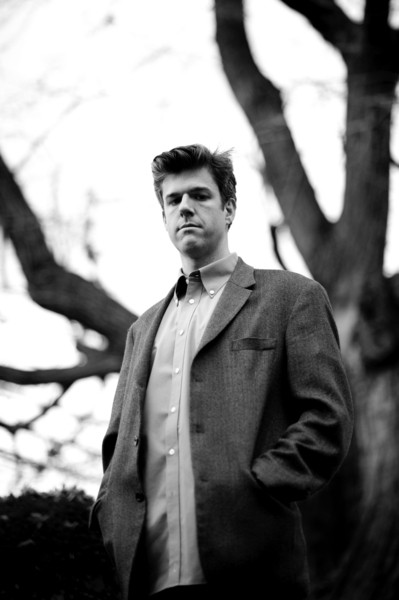