Get In Key: 6 Live Music Shows to See this August 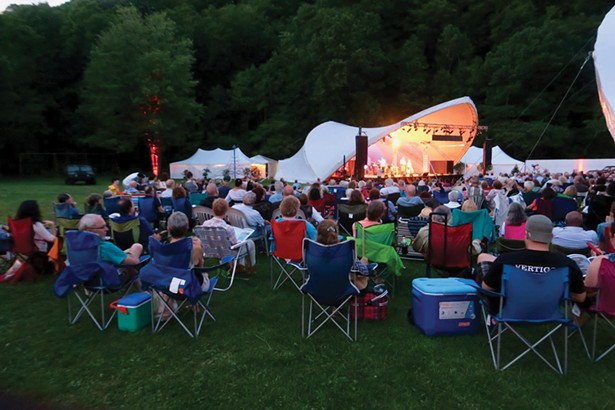 This month's live music offerings span from the pop-country crooning of Zac Brown Band to the arias of the Phoenicia Internation Festival of the Voice, returned home to Parish Field.

What better spot to revel in the recent return of live music than the site of the 1969 Woodstock Festival, the Bethel Woods Center for the Arts? Grammy-winning country rock kingpins the Zac Brown Band—who topped the Billboard Hot Country chart with 2006’s “Chicken Fried”—hits the outdoor concert site for this stop on their appropriately named, post-COVID-cancellation “Comeback Tour.” Teddy Swims and Ashland Craf open. When attending the show, consider making time to check out the historical exhibits at the Museum at Bethel Woods. (Lynyrd Skynyrd and Kansas whoop it up August 20; James Taylor sings and strums August 21.) 7pm. $56-$60. Season lawn passes are available. Bethel.

Summer music’s glorious return also includes that of the long-running Hudson Valley Jazz Festival to participating venues in and around Orange County. “While we’ve presented some of the more nationally recognized names, the purpose of our series is to highlight local jazz musicians deserving wider recognition,” explain the festival’s tireless organizers. “There are excellent jazz musicians working each week throughout the valley and beyond.” With an emphasis this year on parks and other outdoor performance spaces, the 2021 roster, which was still being booked at the time of this writing, features a Bill Evans tribute, the Eric Person Quartet, the Skye Jazz Ensemble, the Big Band Sound, Cloudburst, Ciampa-Levin-Siegel, and more. See website for times, locations, ticket prices. Warwick area.

Trombone Shorty at UPAC on August 22 has been POSTPONED & RESCHEDULED to September 26.
UPAC (Ulster County Performing Arts Center) barrels back in August when New Orleans’s beloved funk/R&B/jazz/rock/rap brass band Trombone Shorty and Orleans Avenue blows into Midtown Kingston. A fave on the festival circuit, the group is fronted by the youthful Troy “Trombone Shorty” Andrews, who has been leading bands in his native city since age six and by age eight had a nightclub in his home ’hood of Treme named for him (HBO viewers will recognize him from his role on the hit series “Treme”). And don’t worry, funky-butt revelers: According to the hall’s website, “This is a reserved, seated event but the Trombone Shorty and Orleans Avenue show is a veritable party. There will be points during the show that the band will encourage the audience to stand, participate, and dance.” (Brit Floyd brings the Pink Floyd celebration August 29.) 7pm. $50 and up. Kingston.

Majesty in the mountains! The Phoenicia International Festival of the Voice arises again after last year’s COVID closure to bring top-notch opera outdoors in the magnificent Catskills. The 2021 incarnation is scaled down, but no less attractive, adding live productions of Verdi’s masterpiece “Rigoletto” by the New York City Opera (August 29 at 8:30pm) and Mascagni’s “L’amico Fritz” by New York’s Teatro Grattacielo company (August 27 at 8:30pm) to the festival troupe’s own staging of Leoncovallo’s “Pagliacci” directed by festival organizer Maria Todaro (August 28 at 8:30pm). $40-$95 each show, with $5 youth (16 and under) tickets and three-night passes also available.

After a year hiatus due to COVID, the Summer Hoot returns to the Ashokan Center August 27-29. This year's lineup features over two dozen bands on a single stage. These acts will perform unplugged—completely acoustic, bluegrass-style shows amplified by a single stereo mic. Performers include local legends The Big Takeover, Radio Jarocho, Le Vent du Nord, the Shaker featuring Simi Stone, the Restless Age, and resident bands the Mammals. The camping festival will also feature entertainment from the Arm of the Sea puppet company and skill workshops like blacksmithing, plus food vendors and kids activities.

Related Back in the Holler: Summer Hoot Returns to the Ashokan Center August 27-29

Composed by local musician Elizabeth Clark (Mamalama), “Seeds Under Nuclear Winter: An Earth Opera” was devised and developed during her three years as an artist-in-residence at the historic Byrdcliffe arts colony. “The story takes place,” says Clark, “in a post-apocalyptic atmosphere and centers around rebirth, finding light and beauty in the darkest times, and our deep connection with all living things, our planet, and with each other” and is “orchestrated for harps, ethereal choral voices, South American/Andean instruments, Indonesian gamelan, chamber strings, droning harmoniums, dulcimer, bells, piano, and an occasional tuba.” The opera debuts here in a setting befitting its earthly themes: the Snyder Estate’s storied Widow Jane Mine. 3pm both days. $26 ($16 students; children 12 and under free). Rosendale.

[Editor's note: This show has been rescheduled multiple times and is currently slated for November 7, 2021] One of country music’s original child stars, Tanya Tucker was a mere 13 years old in 1972 when she had her first and biggest hit, “Delta Dawn” (a year later, Helen Reddy’s cover would take the same song to the number one slot on the US pop charts). Fitting, then, that the Texas firecracker, whose other hits include “What’s Your Mama’s Name?,” “Blood Red and Goin’ Down,” and “Lizzie and the Rainman,” should call upon two of her youthful heirs, Brandi Carlisle and Shooter Jennings, to coproduce her newest album, While I’m Livin’. Tucker cracks the Egg in Albany this month with Walker County opening. (Ann Wilson arrives August 17; Melissa Etheridge edges back September 2.) 8pm. $39.50-$74.50. Albany.