As winter finally gives way to spring across the Hudson Valley, thoughts once focused squarely on snow shovels and salting sidewalks may invariably turn to warmer outdoor activities, such as gardening and landscaping.

For the neophyte, enhancing one’s home by landscaping with shrubberies might seem like a simple endeavor. But before you begin digging up your yard, some local experts want to ensure your hard work isn’t done in vain.

Diane Greenberg, co-owner of Catskill Native Nursery in Kerhonkson, says the region has so many different variables that the first step should be to figure out what the best options for your own neck of the woods might be.

“You really want to find out what kind of conditions you have,” Greenberg says. “People just buy what they like, stick it in the ground, and think it’s going to be okay. But plants have evolved over thousands of years. If you give them what they want, they thrive. If you don’t, they die.”

Lay of the land
Giving the area you’re most interested in working on a thorough once-over is an integral step in ensuring the lasting success of your landscaping project.

What are the basic soil conditions? According to Greenberg, the area is covered by wet, dry, acidic, rocky, clay, and sandy soil. In addition, it’s important to know how much light the area gets before deciding which shrubs might have the greatest chance of working out.

According to Greenberg, taking a look at other trees and shrubs in the area is often a good indicator of what shrubs might thrive as part of a landscaping project. Are the existing trees deep or shallow rooted? Are they healthy? And what kind of conditions do they like? Do they create dry or damp shade?

In addition, Greenberg said it’s important to know whether what’s already growing nearby is an acid creator, like pine or hemlock, as very few plants want to grow near those types. Also, black walnuts put a substance called juglone into the soil that can kill many types of plants.

Norbert Lazar, better known as the Phantom Gardener, has long been a champion of organic gardening. He agrees with Greenberg that it’s vital to give plants what they need. And what Lazar suggests is the use of organic matter.

“There are ways of getting organic matter cheaply if you don’t want to buy it,” Lazar says. “Compost is probably the best, as it takes care of most of your soil needs. We garden organically, so we use complete organic fertilizer. And you can get some really well-rotted manure for free sometimes if you have a truck.”

According to Lazar, organic matter will help with a wide range of specific environmental needs, from assisting with aeration in clay to giving sandy soil a better chance at holding water.

Which actually leads back to the very first step one should consider taking before any other. Lazar suggests taking a pH test of the soil, either through an inexpensive home kit or by bringing a sample to the Ulster County Cornell University Cooperative Extension. Regardless of the results, the next step is likely going to be the same for anyone looking for success. “The first thing that is often overlooked in any kind of gardening is soil preparation,” says Lazar. “It’s like preparing for painting. If you skimp on soil preparation, your end product is not going to be satisfying.”

One of the key components of soil preparation is also one of gardening’s legendary bugaboos: weeding. But as much of a hassle as it might seem, the best option is to get a thorough weeding out of the way sooner rather than later.

“Remove whatever weeds you can ahead of time,” says Lazar. “It can come back to haunt you when it’s much harder to weed than at the beginning.”

Think it through
Mark Adams, president of Mark Adams Greenhouses, says that regardless of what the size of your project is, it’s best to think things through.

“Plan your property in stages, so that you can execute it over several years,” Adams says. “Draw up the whole plan. For example, you’d want to do the front the first year, the back the second year. The front would include walks and so forth.”

Adams says part of that plan should include making sensible choices when it comes to location.

“One of the most common mistakes homeowners make is, they plant too close to the house,” Adams says. “They don’t give enough room for the plant to grow. You have to take into account what will happen when these shrubs grow to maturity.”

Once you’ve done the groundwork—both literally and figuratively—you can begin planting your shrubberies. But with so many varieties available to you, which plants should you choose?

“There’s a lot out there, and for the most part people need to not shoot from the hip, and decide what’s really important to them,” Lazar says. “Some people believe you should only use natives to the Northeast, but it restricts your palate quite a bit. If all I sold was natives, I wouldn’t stay in business. There’s so much out there.”

Another consideration suggested by Greenberg is to consider the environment as a whole, rather than focusing solely on beautifying your property.

“Try and add to the biodiversity of your area,” Greenberg says. “We have more than enough forsythia and burning bush. Be daring, try something new. If you see it growing in front of a gas station, you might want to skip it.”

Among the natives Lazar recommends for decorative purposes are the Itea virginica, a versatile deciduous shrub with fragrant flowers. The Clethra alnifolia, or summersweet, is a deciduous blooming shrub commonly found in the Catskills, and the inkberry, which can grow up to eight feet high, is also popular in the region. The fothergilla is also an option Lazar says might be considered locally, as it has fragrant flowers in the spring and vivid color in the fall.

On the opposite side of the spectrum, Lazar says it might be wise to resist the temptation to plant wild honeysuckle or burning bush because of their invasive tendencies.

“The birds spread it, it grows in dry shade, and it chokes out a lot of the native plants,” says Lazar, referring to the invasives. “You’re restricting what the native flora and fauna can feed on. It turns into a problem down the road.”

When planting shrubberies, it’s also important to take into consideration how attractive the plants might be to deer, who are notorious for turning a beautification project into a all-you-can-eat buffet.

“That’s a huge concern when you’re planning your landscape,” Adams says, adding that the Pieris, a broad-leaved evergreen shrub often used in ornamental planting, is one of the few he knows of that is completely deer-resistant.

Lazar says other evergreens are more attractive to deer, as are native rhododendrons and mountain laurels. The viburnum is a popular choice in the area, whether you’re landscaping for privacy or hoping to attract wildlife, like birds. According to Lazar, the doublefile viburnum is a fairly deer-resistant three-season shrub that doesn’t hold its leaves through the winter, but which has thick enough branches to still provide screening. Viburnums, as well as the gray dogwood, the red dogwood, and blueberry bushes, are attractive to birds, and beautiful as well.

Washington, a certified yoga instructor as well as a gardener with over 20 years of experience, says being more in touch with nature will also help any gardening project thrive.

“When one is given a wetland, they shouldn’t try to make a sunny, perennial garden out of it,” she says. “You can fight nature, but it will be a continuing battle. Instead of trying to put roses in this area, you have to be observant of what is around you. Take the guidance from nature instead of imposing yourself.” 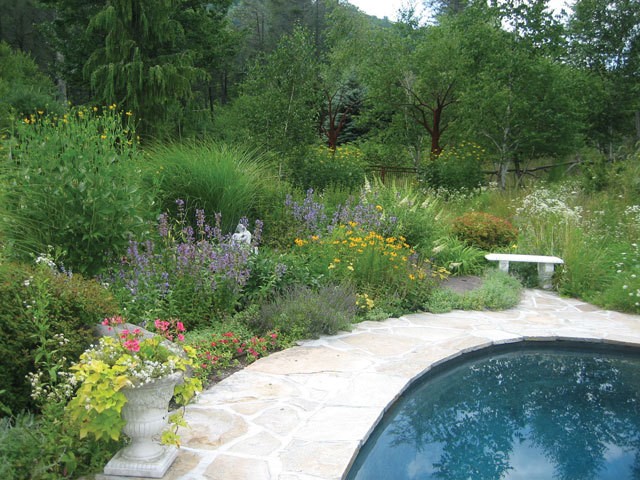 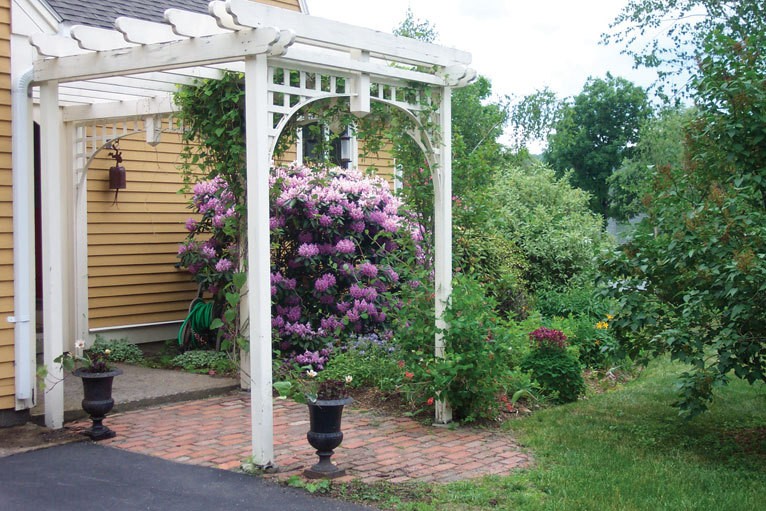