Garbage at the Opera 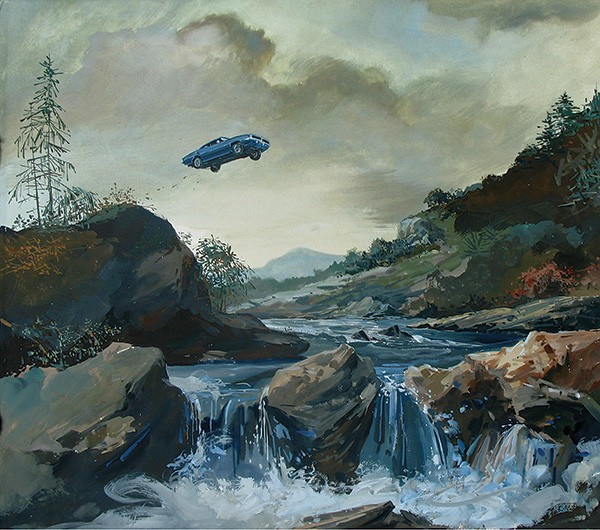 “I’ve tried my hand at straight abstract art, and I’ve always felt like I’m faking my way through it. I need some root of a story,” Zohar Lazar explains. A selection of his paintings will appear at the Hudson Opera House through December 7. The works in the show recount the adventures of two characters, Garbageman and Shithead, luckless wanderers who are the opposite of superheroes—more pathetic than ordinary men. “Garbageman” is a play on words: a man literally made of garbage. In fact, these paintings form the basis for a graphic novel, Spook Rock, which Zohar is currently drawing for Fantagraphics. Several pages from the manuscript appear at the Opera House, executed in a dense style based on the engravings of Bruegel and Van Ruisdael.

Lazar’s titles derive from songs he’s been listening to while painting: “Cancel My Subscription to the Resurrection,” “Drown In My Own Tears.” In one painting, five bricks spell out “I’ve Just Seen a Face.” One repeated motif is the single brick, always imprinted with a word, usually a nonsense syllable. The bricks have numerous connotations. In “Krazy Kat,” the surreal comic strip of the early 20th century, Ignatz Mouse often hurls bricks at the titular character, who swoons with love. Lazar takes this idea further, using the brick to induce spiritual rapture. A limp Garbageman is lifted by a supernal greenish radiance as a fallen brick rests in the foreground containing the word “HUH!” (This image also invokes Lazar’s first name, which is the title of the central book of Jewish mysticism.) “I thought of them as the bricks that had put together the Tower of Babel,” Lazar says, of the repeated image. “Each one of them represented a prayer, or a word from an unknown language, or the actual word of God.”

Bricks, of course, also have local historical meaning. The Hudson River was lined with brickyards from the 18th century until the 1940s. Lazar’s own house, which was built in 1770, is made of brick. Bricks also had words imprinted in them, which could not be read once a building was completed, making the hidden inscriptions into secret messages. Lazar’s one-word brick logos are often taken from the sound effects in comic books, which constitute an American surrealist genre. Phrases like “BZZAAPP” were intended not to be read so much as felt, like a slap. And they are written in all capitals, like the words baked into bricks.

Lazar grew up between Israel and the USA, spending his adolescence in Jamaica, Queens. He went to Parsons School of Design, but quit after two years, stopped drawing, and worked as a furniture restorer at an antique shop in Carroll Gardens. A vocational panic hit when he turned 25, and Lazar hastily assembled an art portfolio. Soon he had a job illustrating a Star Wars trading card put out by Topps, headquartered near him in Brooklyn. Gradually his illustration career blossomed, including such clients as Rolling Stone, The New Yorker, GQ, Reader’s Digest. Lazar is known for his talents of mimicry— his ability to reproduce the styles of numerous artists, from the classic cartoonist Peter Arno to early Mad magazine penciller Harvey Kurtzman. Lazar’s work has been shown in several Manhattan galleries, most recently Morgan Lehman, as well as at the Geoffrey Young Gallery in Great Barrington. In 2001, he and his wife moved to Columbia County.

Zohar Lazar’s paintings and drawings will be at the Hudson Opera House in Hudson through December 7. (518) 822-1438; Hudsonoperahouse.org.

A selection of Zohar Lazar's paintings and drawing will appear at the Hudson Opera House through December 7.