Friday Night Brights: The Accord Speedway Every Friday night from April through September, a dopplered whir spreads out across the hills and dales of the Rondout Valley. Some nights you hear it more than others—wind and leaf cover sometimes conspire to mask it. Weekending visitors and recent transplants wonder at the sound, but locals know—it's the familiar roar of the Accord Speedway. And it's been the cause of more than a few complaints, lawsuits, and failed real estate deals over the years. But the little dirt track has prevailed, a world unto itself, nested back in the winding back roads of rural Ulster County. 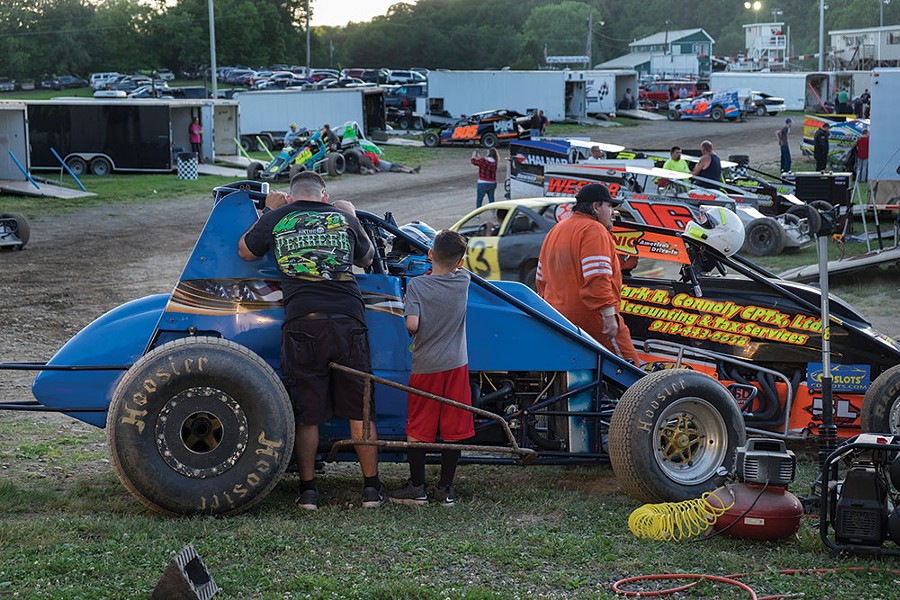 It all began with a kid and a cornfield. In the 1950s, Howard Osterhout was living and farming the land on Whitfield Road, when he decided to make a go-kart track for his son in the middle of the cornfield. He raced and his friends raced and then, "People just started showing up," Tim Adams, assistant track announcer, says, matter of factly. The speedway officially opened in 1962. "There used to be a duck pond down there, right next to the track," Adams says. "They had to move it because people kept flying off the course and landing in the water."

Over the ensuing decades, the speedway grew in popularity, pulling dirt track drivers from all over the Northeast to compete in Friday night heats. In 2001, Gary and Donna Palmer bought the track. The Palmer family is widely respected in the racing community for the many improvements they have made to the facility over the years. "You name it, he has changed it," says Steve Pados, principal track announcer. "Track fencing, VIP suites, enlarged pit area, signage, lighting system, victory lane stage, upgrades to the menu, new clay every couple of years."

At a quarter mile, the track is shorter than most by half (though most drivers like this, as it makes for a tighter race, with more passing, and better "action.") Gary Palmer has widened and reworked the racing surface, building up clay banking that allows for higher-speed cornering. The Palmers also upgraded the bathrooms, fixed flooding in the grandstand, and brought in more sponsors, drivers, and spectators.

The revamped concession stand is always abuzz, selling standard spectator fare like hot pretzels, fries, cheesesteaks, and nachos. Given the stadium environment (and the day of the week), the absence of beer from the offerings seemed glaring, but Pados says a beer license has just been approved. 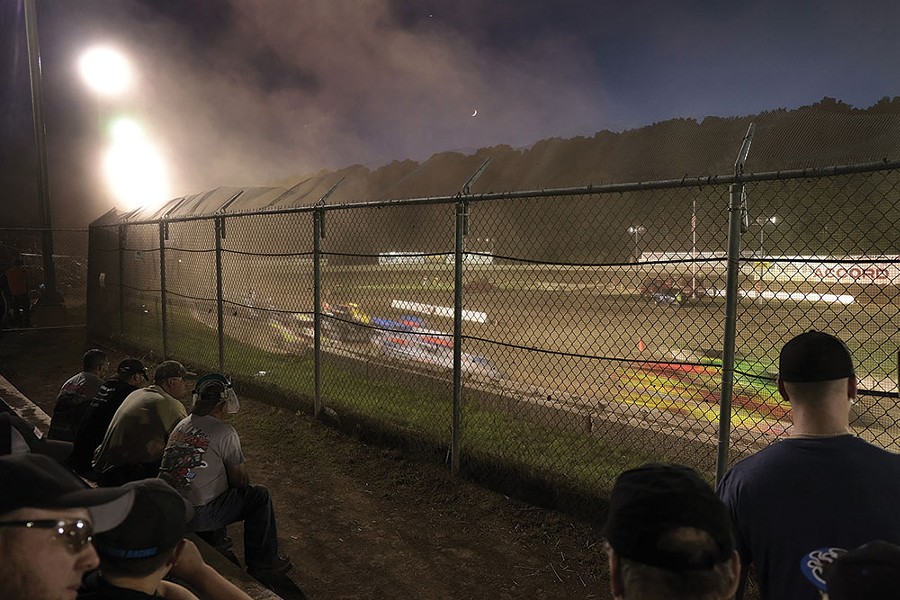 Yes, some people are there purely as spectators. But the vast majority of seats in the stands are the friends, family, and pit crew of the drivers. After their racer finishes, they leap up and file out to the pit to congratulate or commiserate, check on the car, and pack up the trailer. Most of the drivers I talked to, from age 14 up through their 60s, also race on Saturday nights at the Orange County Fair Speedway in Middletown. And they do this every weekend—Friday and Saturday night—all summer long.

"Our dad raced way back in the day, in the `90s," says Kyle VanDuser, age 21. "So we would always come up here when we were little." He and his brother, Chris (age 24) have been racing dirt for over a decade, the younger inheriting the hand-me down cars of the older as he moved up the divisions. They're not hoping for glory, they do it, "just for fun. For a couple wins," Chris says. And they're planning to do it for life.

It's the same story over and over again—a family legacy, an obsession cultivated and passed down, a story echoed all throughout the pit. Like the second-generation, 14-year-old Samantha Muller, who races in Rookie Sportsman. "I'd rather be a dirt track all-star than race asphalt," she says, while waiting for her turn on the track. Or the three-generation Ricci family dynasty. In Modifieds, Rich Ricci Jr. competes against his son and daughter, Rich III and Allison, his brother Mike, and his nephew, "Jammin' Jimmy Wells." "To top that off, Papa Rich Senior is the crew chief for Rich Jr., Allison, and Rich III," Pados explains.

The track is also not bound by normal motor vehicle laws—you don't need a driver's license to compete—so there are kids as young as nine racing. Occasionally there are newcomers, like Joe Judge, the New Paltz cop who caught the itch. But by and large, it seems that the dirt track fever is hereditary. For someone who has heard the raceway every Friday night for four summers, the experience of being there in-person was nothing like I expected. We arrived to a grass field packed with cars, the last of the day's light shimmering on the dust in the air. The pit area beyond was a gridlock of trucks and trailers, with clusters of people gathered around the vehicles, orbiting like satellites.

The baritone roar of the track had already begun—hot laps, an untimed, noncompetitive warm up, where drivers get to know the track and warm up the car. Accord Speedway averages a roster of 100 cars on any given Friday night, and draws over 1,500 people. There are six weekly racing divisions: Modified, Sportsman, Rookie Sportsman, Pure Stock, 4-Cylinder, Junior 4-Cylinder, and Wingless Sprints. These classes govern both the number of cylinders permitted as well as the modifications allowed to the engine. On select nights, there is also an Enduro class. The most inexpensive form of auto racing, Enduro involves windowless stock cars that have not had any major mechanical enhancements. In other words, they look the most like cars you would see on the road.

On June 15, Enduro was the final and most exciting race of the night—a fierce 50-lap showdown between five racers. Jeff DeGroat ceded a 22-lap-long lead to the devilishly quick Shawn Maloney, who zipped past to win in his black and pink car (so painted for his three-year-old daughter, who watched on from the grandstands in the comfort of a Little Tikes wagon). 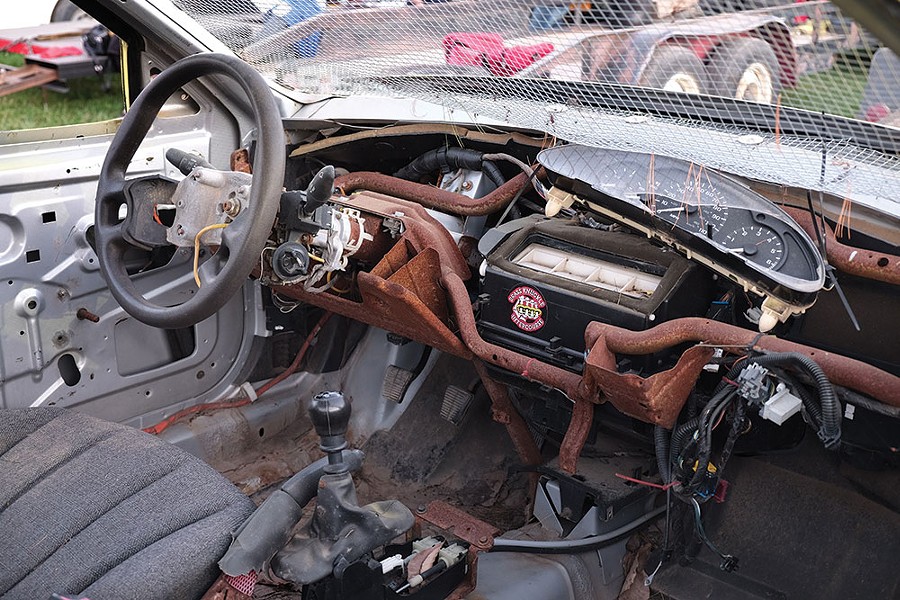 Lest you attend unprepared, a warning: It is very dusty, and very loud. Huge sprays of dirt fly into the stands as the drivers pass and corner hard. The bleachers are covered, your car will be covered, your hair and clothes will be covered. Bring eye and ear protection. A bandana to cover your mouth can't hurt.

Among the upcoming special events this season are the Battle of the Bull Ring (non-points race) on July 3; Camera and Autograph Night on July 27; Racers Reunion Nostalgia Night on August 10; First Responder Night with fireworks on September 7; Eastern States Qualifier Champions Night on September 14; and Halloween Havoc on October 27.

Tickets for regular shows are $14 for adults, $12 for seniors over 65, $3 for children ages 11 and under. If you really want to get down and dirty, for $35 you can also purchase a pit pass, watch the behind-the-scenes action, wander through the trailers, and talk with the drivers.