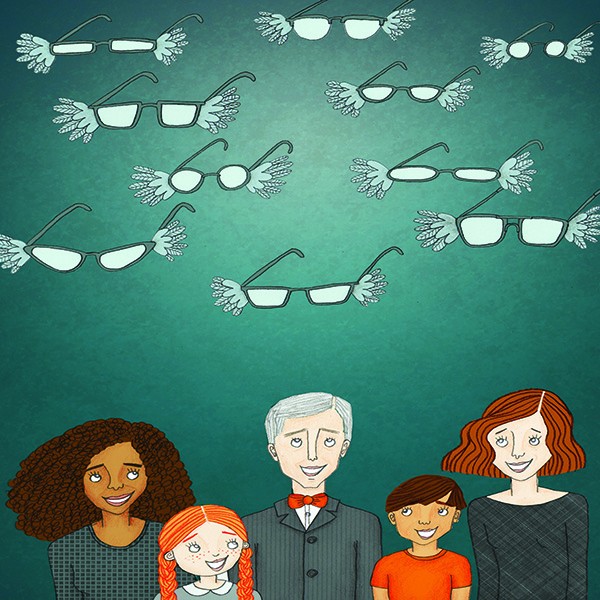 Nancy Neff has, for the most part, cured herself of glasses and contact lenses. Severely nearsighted since age five, she never imagined that an existence independent of spectacles was in the realm of possibility. "I was a very anxious, nervous child, and all they knew to do was to give me stronger and stronger glasses," says Neff, who had a prescription of -10 from her teen years until about age 50. "It was always, 'Nancy has bad eyes.' I just didn't want my vision to get any worse." So in 2001, when she heard about Dr. Marc Grossman, a holistic optometrist who specializes in natural vision improvement, she had to learn more. "It was a light-bulb moment when a professional eye doctor told me I could improve my eyesight," she recalls. "I'd always eaten healthy and been active physically, but I just assumed there was nothing I could do about my vision. It was like somebody told me I could fly!" And yet, she did: Neff, a former computer programmer at IBM who lives in Fishkill, was gradually able to reduce her prescription as she followed Grossman's individualized program of vision therapy and eye exercises. Today, she needs glasses only to drive at night.

Hope Is in Sight

Once relegated to the fuzzy background, natural ways to improve vision are coming into sharper focus these days. Among athletes, vision training is the latest way to gain a toehold over the competition. A study of baseball players at the University of California, Riverside, demonstrated that after vision training the players were able to improve their reading of eye charts by 30 percent—and their batting averages shot up too. Another study published in the February issue of JAMA Ophthalmology showed that a computer-based vision-training program resulted in a 19 percent improvement in glaucoma patients' peripheral eyesight. For the general public, apps created to enhance vision are beginning to debut. One, called UltimEyes, works by exercising the visual cortex, the part of the brain that processes vision. Despite these examples, the mainstream Western medical establishment continues to insist that the only way to fix eyesight is with glasses or surgery; natural vision improvement isn't even touched on in medical school. "Glasses don't correct anything—what they do is treat the symptoms," says Grossman, who practices with an integrative approach in New Paltz and Somers. "Just because an eye doctor says you can't be helped, it only means they can't help you. For almost all eye conditions, there is hope."

The debate is not new; it's been going on since the early 20th century, when Dr. William Bates, the American ophthalmologist who pioneered natural vision improvement, was practicing in New York City. Bates came out with a book called Better Eyesight without Glasses (1920)—and he was practically thrown out of lecture halls for saying that common disorders such as myopia (nearsightedness) and presbyopia (farsightedness) could be cured. Why were other doctors so threatened? Bates turned the paradigm on its head when he posited that it isn't the lens inside the eye, but rather the muscles around the eye, that are the main focusing apparatus. The muscles, he said, could be strengthened; he demonstrated by curing his own presbyopia, and he went on to create a program that reduced the rate of myopia in New York City schoolchildren from 6 percent to 1 percent. Yet Bates also made some eyebrow-raising claims that may have diluted his credibility—such as that gazing directly at the sun is good for the eyes. To this day, his work is taken seriously only by a fringe group of alternative eye doctors at home and abroad.

A Healing Retreat to India

One place where Bates's philosophies caught on was India, where a doctor at the Sri Aurobindo Ashram in Pondicherry took an interest in the Bates Method. The ashram opened its own center, The School for Perfect Eyesight, in 1968—and it remains one of the premier institutions in the world for vision improvement. "Bates's paradigm makes it possible for us to self-help," says Nirankar S. Agarwal, PhD, who set up a similar vision program at Sri Aurobindo Ashram's Delhi Branch in India's capital city. At weeklong "vision camps" held at both the Pondicherry and New Delhi ashrams, participants come from all over the world to follow the school's program of eye exercises and relaxation techniques. Some of the routines come directly from Bates—such as eye movements that involve looking from side to side and up and down without moving the head, and "palming," a way of covering the eyes with the hands to relax them. Other routines hail from Indian doctors' techniques, such as applying organic honey drops to the eye. The honey creates a burning sensation that lasts several minutes—but Agarwal swears by its effectiveness in treating dry eyes, conjunctivitis, and even early-stage cataracts and glaucoma.