A Revealing Look Behind the Hospital Curtain 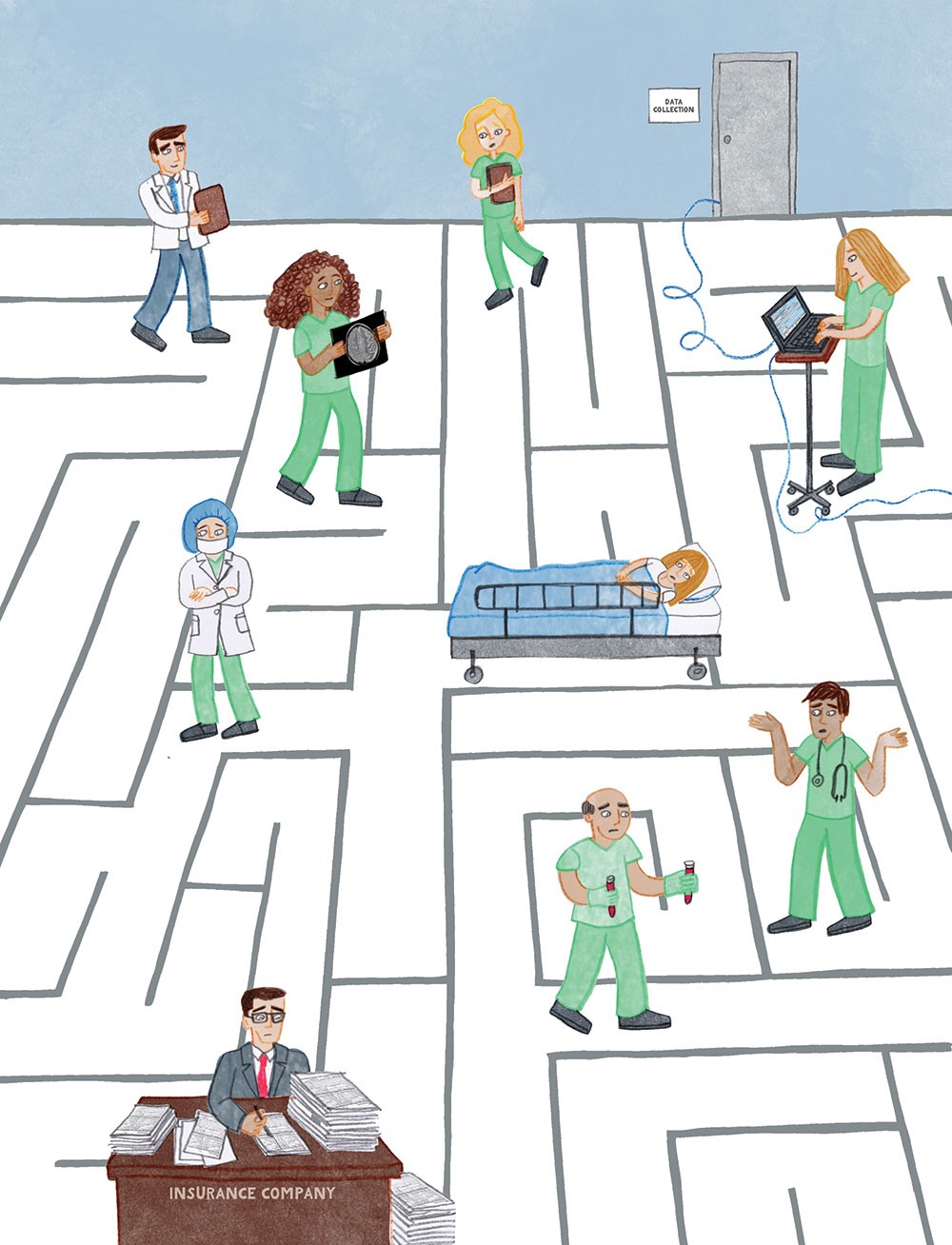 This writer has always craved an opportunity to travel to the front lines of timely, important issues and report back an investigative piece filled with nitty-gritty details. Fourteen days in the hospital was not exactly what I had in mind, but that's what life handed me this past September. As a patient, I experienced the many indignities of hospital life: lack of privacy, incessant noise, dubious food, disrupted sleep, and endless probings and punctures that left purple trails along my arms. I also met my share of smart, well-meaning doctors, and nurses and aides with a flair for bedside compassion. I was getting an inside look at a health-care system knee-deep in flux and reform that is striving hard these days to be "patient-centered" and "value-based" (two industry buzzwords), but that is struggling to shed its traditional, one-size-fits-all ways.

My story includes two hospitals, four infectious disease doctors, seven hospitalists, countless bags of antibiotics, and one missed diagnosis that could have resulted in death or brain damage before I was treated for what I had: listeria meningitis. It begins with a 105.7-degree fever followed by a mad dash to the ER and a battery of tests: chest X-ray, blood culture, CT scan of the head, ultrasound of the liver.

After I'm admitted time slows down, measured in the drip of IV fluids and the comings and goings of nursing carts. Seeing an actual MD for more than five minutes is rare; it seems that every day a different hospitalist is on staff to manage the care of every patient in my wing, and he or she spends much of the time parked at a computer behind the nursing station. Relatively new in health care, a hospitalist is a physician employed by the hospital to take the place of your family doctor—emphasizing the fact that to be a patient these days is to put yourself in the hands of an institution. Not a person, per se, though the personnel are many—all of them straining to meet the needs of patients and Big Data in one breath.

My first week in the hospital will be a lost week. The providers are perhaps thrown off by a gut condition I have that could be part of the problem. No one will notice that my searing headaches, repeated requests for Tylenol, and light sensitivity (I am constantly killing the overheads) are signs of bacterial meningitis—inflammation of the brain and spinal cord membranes—a condition I never suspect.

First Aid for a Fragmented System

As the days pass, both the patient and the health writer in me grow amazed at the fragmentation of care and seeming lack of communication among caregivers. There is the hospitalist who says that my blood cultures have come back positive for a type of corynebacterium he's never seen before ("These bacteria are usually round and yellow or long and blue—but yours are round and blue!"). There is the infectious disease doctor who orders me a new course of antibiotics through Labor Day weekend, when a skeleton staff leaves me and my fellow patients feeling adrift. There is the second infectious disease MD who reverses the story, announcing that the mystery bacterium is just a harmless skin contaminant. I am sent home after a week to my great relief, eager to flee, but with the nagging thought that I have not been treated for anything.

Why such disjointed care in an era when the digitization of medicine and the adoption of electronic health records (EHRs) should be connecting healthcare professionals better than before? For one thing, the introduction of IT to the industry is still in its infancy, says Rachel Maguire, research director at the Institute for the Future, a think tank specializing in long-term forecasting. "[Digital] is a relatively new form of communication for health care, which has largely depended on paper, faxes, phone calls, and traditional communication styles a lot longer than most every other industry," she says, noting that the fax machine, that dinosaur of the 1980s, remains a fixture in physicians' offices. "And just because we have digital technology doesn't mean we have the cultural practices to actually utilize it in a meaningful way."

With HIPAA laws protecting patients' privacy and limiting the free exchange of information among health care providers, the EHR could become a place for physicians to safely and permissibly share ideas; instead, caregivers use it to report findings and record data, like a high-tech ledger. And while this form of IT is dragging health care into the 21st century, it also comes with a price. "One of the biggest criticisms about the EHR is that now you have some providers who never look at the patient; they just look at the computer screen and ask a bunch of predetermined questions," says Maguire. "It's become an interaction that's about data collection."