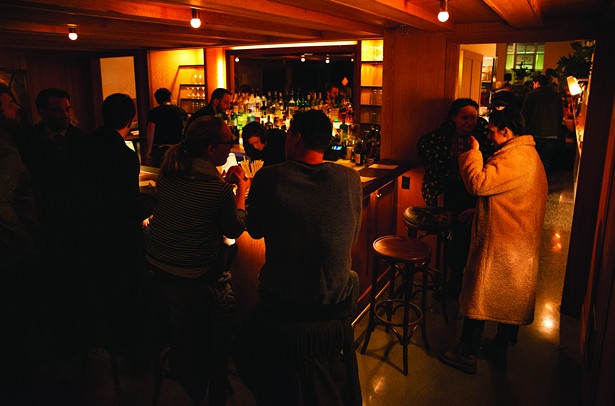 Despite the opening of a number of new establishments in recent years—Front Street Tavern, Crown Lounge, Lis Bar, and Kingston Standard, to name just a few—Kingston’s restaurant scene continues to expand. Notable recent openings include the elegant restaurant inside the sumptuous digs of Hotel Kinsley and its wood-fired pizza sibling, Lola, both run by the hospitality team of Taavo Somer and Charles Blaichman and consulting chef Zak Pelaccio. The next few months will see the opening of another round of new eateries in the city (including a third Buns Burgers location Uptown), many of them clustered along the Midtown Broadway corridor. In conjunction with Radio Kingston’s buildout of a new studio and events space and the Kingston Food Coop’s grocery market to open in the next year or two, Midtown will soon be jumping. Below is a preview of what mouth-watering delights await us.

Here’s something we’ve not seen before: deli and whole-animal butcher by day, bar/restaurant by night. (Lunch Nightly, get it?) Located in the former Peace Nation cafe on Broadway, this Janus-faced eatery is the brainchild of entrepreneur Miles Crettien, bartender Gabe Weinstock, and branding expert Samantha Strand. (Kingstonians will know Crettien and Weinstock from Lis Bar, where both worked.) The concept works like this: Swing by for lunch and get a corned beef sandwich, or perhaps a pound of sliced roast beef and some salads from the deli case. Once night falls, the deli shuts down. Come back for family-style dining sourced from the butcher shop and ingredients from Hudson Valley farms. (In addition to Tiki bar staple crab Rangoon, a favorite of Crettien’s grandma Faye.) The drinks regimen will lean heavily on natural wine, beer, and spirits served neat. However it plays out practically, Lunch Nightly will be one of the more interesting places to sip and sup in 2020. It is expected to open in mid-April.

After sitting empty for over a decade, the former Midtown Chophouse space on the corner of Broadway and Downs Street in Midtown is getting new a lease on life as Masa Midtown. (“Masa” is the Turkish word for table.) The new proprietor is Ozlem Oguzcan-Cranston, known as Chef Oz. Oguzcan-Cranston and her husband purchased the building housing Masa at 666 Broadway last April and have spent the last year renovating the 60-seat restaurant space and the four apartments upstairs (which will be up for rent in April). Chef Oz, Turkish born and Brooklyn raised, recently moved to Kingston after stints with Sherry-Lehmann Wine & Spirits, Abigail Kirsch Catering; she spent the last five years running her own New York City-based catering business. Masa Midtown is her first brick-and-mortar business.

Masa, like Chef Oz, is Turkish to the core, and will feature traditional Turkish and Mediterranean fare like zucchini herb fritters with lemon garlic yogurt; raki-steamed mussels with fennel seed, tomato jus, and charred pita; yogurt-marinated chicken thighs on the bone with basmati rice; and filo spring rolls with spinach, kale, shallots, and feta cream. Masa is set to open as a catering and events space on March 1. Oguzcan-Cranston plans to operate in a limited capacity for a few months while the restaurant works out the kinks and Chef Oz can secure a full liquor license. She plans to open Masa as a full-service Turkish restaurant by summer.

First, there was The Pizza Book, Aaron Quint and Mike Bernstein’s Kickstart-funded cookbook-length love letter to pizza, published in 2016. Then Quint launched Kingston Bread Lab, a community-supported micro-bakery which eventually moved into the kitchen of Rough Draft Bars & Books, serving small-batch, naturally leavened breads made with freshly milled grains on a first-come, first-served basis. (On Saturday, Quint’s bagels will available by the bagged dozen and half dozen starting at 10am at Rough Draft. Hot tip: Get there early or they will be gone.)

We first reported on the latest project by chef Youko Yamamoto (of late, lamented Gomen-Kudasai fame in New Paltz) last January. After a successful Kickstarter campaign, Yamamoto was planning to open her new Japanese noodle shop and sake bar, then called Gomen-Ramen, last March after finishing renovations on a Midtown storefront next to an existing Midtown sushi restaurant, Yasuda. Yamamoto ran into problems getting a building permit last year, and posted the note below to her Kickstarter page on December 19: “We have received the official building permit yesterday. It allows us to start construction now. The Tanma Ramen (new name) is becoming real at last. We have to see how the construction goes, and will decide the opening date.”

Frustrating to say, one of the most-anticipated restaurant openings of 2019 is now one of the most awaited of 2020. We hope to be slurping ramen and sipping sake in Midtown soon! Calls on the status of Tanma! Ramen Tavern were not returned by press time.