Fossil Fuels on the Brink 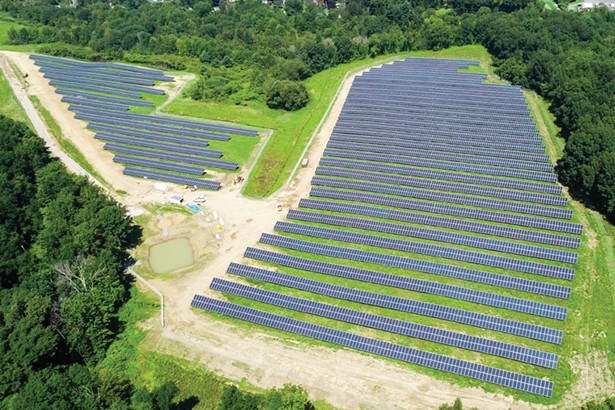 As a community, as a state, as a nation, and as a world, we are at a pivotal moment in the fight to slow climate change. The past few months have brought much speculation on how the coronavirus pandemic might help usher in the triumph of renewable energy over fossil fuels.

It's not so much that COVID-19 has been good for renewable energy, but that it's been so bad for the already struggling fossil fuel industry. Less demand for transportation has pushed oil and gas prices to historic lows. The effects of the pandemic have exacerbated the financial ruin of fossil fuels and positioned renewables as a smarter investment than coal and oil.

However, the long-term consequences of this will depend on the federal government's response. As Vox reported in early May, the fossil fuel industry is doubling down on its efforts to lobby the government, and Trump has already expressed his support for the industry and his desire to bail them out. The Guardian reported that $50 million of the coronavirus aid package was allocated to fossil fuel companies, and the administration has also rolled back pollution regulations and waived royalties for oil companies using federal land.

The potential consequences of this aid aren't just environmental. Job creation in the energy sector is an important consideration, with over 40 million Americans facing unemployment and an increasingly unpredictable labor market. It's clear that our economy will need to be rebuilt and cannot just "return to normal." To this end, research from multiple sources shows that investing in clean energy will create up to five times more jobs than gas and oil will, and will up our national game in new technology as well. The Bureau of Labor Statistics reported in 2019 that solar panel installers and wind turbine technicians are the fastest-growing occupations of the next decade.

Though the pandemic has taken a toll on jobs in the clean energy industry, experts agree that investing in clean energy is a smart and forward-thinking move. After the 2008 financial recession, the Obama administration invested $90 billion in clean energy with the Recovery Act, and it paid off. In a government report that assesses the effects of the stimulus, the Council of Economic Advisors estimates that the act increased the GDP by two to three percent and "supported roughly 900,000 job-years in innovative clean energy fields from 2009 to 2015." (A job-year means the creation of one full-time job for the duration of a year.)

This kind of data is one reason there is so much pressure on Congress to focus aid packages on renewable energy, with support from many democratic representatives in the House.

E2, a national, nonpartisan group with over 8,000 members that takes a business approach to environmental policy, penned a letter urging Congress to pass several measures that were effective in the past, including a slew of bills that offer clean energy incentives, expanding the small business loan program to provide specifically for clean energy companies, and resurrecting a grant program for renewable energy projects that created more than 63,000 jobs and  $5.2 billion in cumulative savings on energy bills from 2009-2015. The letter also advocates for funding educational institutions to create training programs for displaced workers looking for new careers in clean energy, reminding Congress that with "Secretary Mnuchin predicting a COVID-19 driven unemployment rate of 20 percent or more, this sector has shown that it can be an engine for good, well-paid, important, community-based jobs now and in the months and years to follow."

The anticipated increase in jobs will need to be met with a workforce that has proper training. An organization that's making this happen is the Workforce Development Institute, a New York nonprofit that is "committed to providing New York's workforce with the skills needed to respond to a transitioning energy sector." Their efforts have included facilitating the state's first wind farm technician training school, connecting companies with opportunities in renewable energy, and publishing a thorough report that assesses the growing offshore wind industry and its implications for New York's workforce. "There is a wide range of occupations involved in the different sectors of renewable energy and many are the same as occupations in other sectors." says Ross Gould, director of Energy and Climate at the Workforce Development Institute. "WDI has learned that the public is just not fully aware of the range of the jobs involved in clean energy infrastructure projects. In some cases, jobs that come with a community or utility scale solar farm go way beyond what people typically think of and we are helping our partners in labor, industry, government and academia overcome workforce barriers that may hinder our ability to meet the state's ambitious clean energy targets."

New York has some of the most ambitious goals in terms of energy: 70 percent renewable electricity by 2030 and a 100-percent-carbon-free economy by 2040. To achieve this, the state offers some of the best incentives for the switch to solar power through various subsidies, tax credits, and Governor Cuomo's energy policy guided by the recent Reforming the Energy Vision process, and NYSERDA's solar accessibility initiative, NY-Sun.

In early April, New York passed a bill called the Accelerated Renewable Energy Growth and Community Benefit Act. Although there's no precise dollar amount associated with the act, it will speed up the construction, siting, and permit processes for new clean energy projects throughout the state. New York's website states: "As the state seeks solutions to getting the economy back on track after overcoming the COVID-19 crisis, restarting renewable energy construction will play a central role in the green economy."

One model that's helping the state reach its goals is Community Choice Aggregation (CCA) In these programs, communities pool their demand for electricity and use their combined buying power to negotiate cheaper rates for the power—which can be renewable. In 2019, Hudson Valley Community Power used CCA to transition over 100,000 homes and small businesses to 100-percent-renewable energy. HVCP uses the Community Power program framework pioneered by Joule Community Power, and was formed in partnership with them. Participants subscribe to a solar farm, which feeds energy into the local utility grid. Because of the state's tax credits, residents are only billed for 90 percent of the solar credit value, lowering their bills by 10 percent. Right now, the program provides solar power to Beacon, Clinton, Cold Spring, Fishkill, Marbletown, New Paltz, Philipstown, Poughkeepsie, and Red Hook. The company expects to distribute five times more solar power in 2020 than in 2019. The pandemic has not slowed down growth for the CCA program. In fact, there is more interest than ever. According to Jeffrey Domanski, director of Hudson Valley Energy and local program manager for HVCP, the program is about to launch a new aggregation of six communities in Rockland County, and probably an additional one by the end of the year.

Not only does the CCA save people money, it puts energy decision-making authority in the hands of communities. To further support this effort, HVCP has established "Sustainability Funds." For each enrollment in the Community Solar program, $50 is allocated to a fund for that municipality to oversee and use.

This emphasis on community empowerment is in line with an intersectional approach to environmentalism that is championed by the Climate Justice Alliance, a group of organizations that strives to "Shift the narrative of climate change solution efforts from a carbon-centric, carbon-reductionist focus to one that is people and community-based, and rooted in principles of justice." Through this lens, a sustainable energy future does not stop at replacing fossil fuels with renewables. It means building a whole new economy that redistributes power to marginalized communities, since climate change is not a stand-alone issue but one result of an extractive economy that exploits and pollutes the most oppressed. (The effects of climate change fall disproportionately on low-income communities, indigenous populations, and people of color even though these groups contribute to it the least.) The mainstream environmental movement has been criticized for ignoring environmental racism, but these issues are getting more press as the recent protests throw a spotlight on all forms of racism and exploitation.

As the country reels from the financial recession and grapples with rampant racism and political tension, moving toward a net-zero economy has never been more important. The uncertainty of the present moment destroys both our limited notions of what is possible and our illusions of powerlessness. We can picture a different kind of future—and we can all participate in the organizing underway to create it.

Cordelia Schiller is a Poughkeepsie-based freelance writer and illustrator, and a contributor to the Lakeville Journal.

The Future Is Now the future is now