Fork-Tender: A Round-Up of New Restaurants in the Hudson Valley 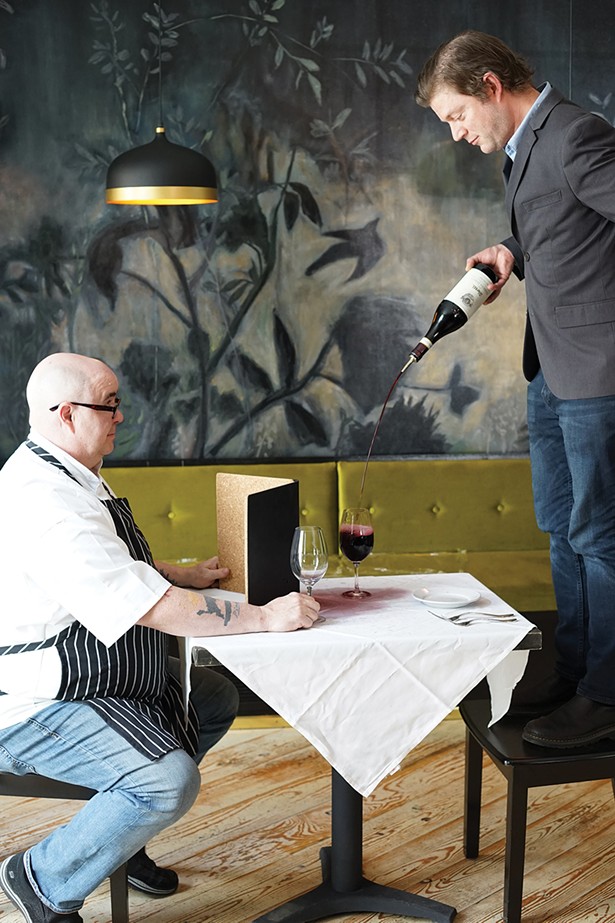 When we say "Irish food" and "Chinese food," we're willing to bet you thought of pub pot pies and greasy take-out dumplings served with sauce from little plastic packets. And who doesn't love those things? But as the world gets smaller and the Hudson Valley food scene gets bigger (and loftier), there's more to learn—and more to love.

Of late, gourmet tacos take over a train station in Newburgh; light Polish fare finds a home in Midtown Kingston; Rhinebeck welcomes both an inventive, upscale Irish spot and a "farm to chopsticks" Chinese eatery by a Connecticut-born chef with Michelin-starred pedigree; and, in a midcentury diner off the Taconic in Ancram, even American food gets more worldly. Read on for the fancy new brunch or dinner options that have opened in the last year.

Chef Rich Reeve has been elevating pub fare since he took over the kitchen at Brady's in Poughkeepsie in the '90s. For 12 years, Reeve and his partner Maya served up inventive tapas and punk rock on vinyl in Uptown Kingston before closing (to much public outcry) last spring. After shutting off the last burner, they peaced out to experience the gastronomic marvels of Cork, Galway, and Dublin. Turns out, that was no early retirement. At Kyle Kelley's recently opened Irish fusion restaurant in Rhinebeck, Reeve is incorporating his favorite Celtic concepts with creativity and flare. Find seasonally-inspired innovations like venison carpaccio; Earl Gray-cured Irish salmon served with crème freche, dilled cucumbers, and caviar; pork belly and lobster in black pudding and cider reduction ($28); and warm date pudding in toffee sauce and clotted cream ($9). A three-course prix-fixe is $30.

In the late 1950s, the 1909 West Shore Train Station in Newburgh was boarded up and left to rot, sitting forgotten on the banks of the Hudson until an eight-year renovation commenced in 2001. Now it has found the perfect tenant. At Hudson Taco, diners can enjoy empanadas, street corn, churros, and, of course, tacos under the glimmer of high-design lighting fixtures and exposed ductwork. Or, in summer, opt for a table on the 60-foot patio with sweeping Hudson River views. Colorful little tacos start at $2.50, including vegetarian options like the mushroom and shishito taco with queso fresco, and the cauliflower with dates, pine nuts, and charred salsa. Things get fusion-y with the Korean BBQ short rib or ponzu salmon "tartaco." Just a few bites each, our recommendation is to try a bit of everything. The drinks list includes around 40 different tequila options, six mezcals, and four specialty margaritas (from $9 to $12), not to mention a custom corn lager made with locally sourced malt by their pals at the Newburgh Brewing Company.

Just around the block from Bia on Market Street, Lucky Dragon has cut out two big jobs for itself: the first, expanding the American concept of Chinese food to encompass thoughtfully plated, traditional Mandarin, Cantonese, and Sichuan dishes made with fresh, local ingredients; the second, making the phrase “farm-to-chopsticks” a thing. The first is going beautifully so far. The second? Only time will tell. Award-winning local restaurateurs Chris and Howard Jacobs took their mutual love of flavorful, regionally specific Chinese cuisine and the dim sum of their past Chinatown adventures in Toronto and San Francisco and applied the farm-to-table ethos. Chef Alex Burger, who honed his expertise at Michelin-starred establishments, including Daniel Boulud’s legendary Daniel in New York, will retain his current post as executive chef at the Jacobs’ first Rhinebeck outpost The Amsterdam, while also taking on that role for Lucky Dragon. With the aim of “authentic” Chinese, his menu is shaped in part by his experience working in restaurants in Hong Kong, Thailand, and Singapore. Diners can find Chinese takeout classics—crab rangoon ($8), General Tso’s chicken ($18)—but taken up a notch and paired, less classically, with a tiki cocktail.

If pastoral Ancram was waiting for its foodie revolution, it lucked out when local Kristopher Schram decided to come back home and buy a classic chrome roadside diner. Complete with a politically incorrect neon sign and shiny, bright red banquets, the West Taghkanic Diner has been slinging all-American diner fare since the early 1950s. But in recent years, locals report it had gone downhill. Now, Schram—who cut his teeth in executive positions from Napa Valley to Copenhagen—has taken over the West Taghkanic, staying true to the "diner concept," with a menu of largely under-$10 dishes including pancakes, burgers, Greek salads, and, of course, some trendy new favorites (#avocadotoast). But, all the ingredients (and the kombucha) are now locally sourced, and the bacon and homemade pastrami are smoked on premises. Local 'nduja and stracciatella crown the omelets, the wine is natural, and the negronis are legit. This is diner fare, elevated.

The original print version of this article was titled:
"Fork-Tender"