Five places to Eat out this February in the Hudson Valley

From a new Woodstock restaurant by the owners of the Insta-iconic Phoenicia Diner to a swanky Poughkeepsie brewery pouring beer worthy of the gods, new dining and drinking establishments just keep popping up in the Hudson Valley. Here are five places to check out this February.

This cozy eatery, tucked away in Poughkeepsie's Little Italy neighborhood, takes cues from the Caribbean and Southern cuisine of chef/owner Brandon Walker's heritage. Jerk ribs with Sherry-tamarind glaze ($12) sit squarely in the Venn diagram overlap of those influences, marrying BBQ to the sweet-yet-sour taste of the tropical fruit. Not to be missed are the grit croquettes served with garlic aioli ($8), a delightful Southern twist on fried yum. A recent fish special featured buttery escolar, rarely seen on Hudson Valley menus. Grilled and served with saffron risotto, the fish showcases the chef's assured technique. Walker is featured in the recently published Toques in Black: A Celebration of Black Chefs, by award-winning photographer Alan Battman.

Essie's Restaurant: Southern Fusion in Poughkeepsie's Little Italy
Why Brandon Walker's Poughkeepsie eatery has largely flown under the radar since it opened in 2016 is a mystery to us. Essie's Restaurant, in the Queen City's Little Italy neighborhood, is squarely in the farm-to-table, New American tradition, but with a nod to Walker’s Caribbean and Southern heritage.
By Brian K. Mahoney
Restaurants

The long-awaited second restaurant from the Phoenicia Diner team opened in late December. Locals will recognize the site of the new Woodstock restaurant as the former Gypsy Wolf Cantina transformed into a gleaming homage to '60s roadside eateries. Fittingly, here sides reign supreme and orders are taken at the counter. The menu features ambitiously priced, elevated comfort food classics, akin to those at Dixon's sister diner. The Dixon Daily consists of a main, like Friday's airy fish fry, paired with two sides and a dessert ($22), which is dispatched to your table on a TV tray. Sandwiches like the juicy fried chicken with slaw and kimchi mayo come with one side ($14-17). A token system allows you to retrieve Ronnybrook soft serve with caramel and flaky sea salt ($5) at your leisure. Dixon is relatively quiet now, but the spacious outdoor patio awaits the crowds that are sure to flock in warmer months.

Located on the ground floor of the newly opened Queen City Lofts building, Zeus Brewing is Poughkeepsie's latest craft beer destination. In addition to its 10 taps, which rotate through beer styles, as a brewpub, Zeus takes food seriously, offering up a menu of small plates, pasta dishes, salads, and craft pizzas. With its sleek, black-tiled backsplash; brushed brass accents; and modern light fixtures, the brewpub has a swankier vibe than most of its more industrial-chic counterparts—a fitting vibe to accompany the brewery's divine aspirations. In the summer, the rooftop bar—with its panoramic vistas of the Catskills, Hudson River, Mid-Hudson Bridge, and the surrounding city—will be the place to be.

Related Zeus Brewing: Poughkeepsie's Newest Brewpub Aims for Beer Worthy of Gods: In Queen City, The King of Brewpubs Opens with a Bang

Zeus Brewing: Poughkeepsie's Newest Brewpub Aims for Beer Worthy of Gods
In Queen City, The King of Brewpubs Opens with a Bang
Located in the newly opened Queen City Lofts buildings, Zeus Brewing is Poughkeepsie's latest craft brewery destination. With a swanky interior; a rooftop bar offering panoramic vistas of the Hudson River, bridge, and surrounding city; and a commitment to god-like excellence, this brewpub is lining up to be the spot to be next summer.
By Jamie Larson
Craft Beverage Industry 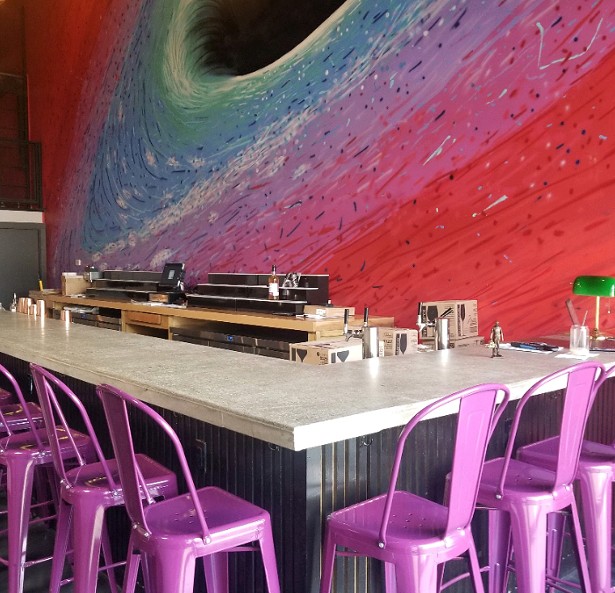 After falling in love with the drive-through coffee huts of Seattle, Samantha Sapienza dreamed of bringing the concept back home to the Hudson Valley. In August 2016, she opened the first All that Java location, a to-go coffee output run out of in a tiny-house trailer in her native Rhinebeck. This tiny coffee shop on wheels has had stints on the Walkway over the Hudson and now resides on Ulster Avenue in Kingston, but in January Sapienza came full circle, opening a brick-and-mortar location in Rhinebeck's Montgomery Row. The cafe has a full espresso bar, plus freshly brewed drip coffee, and pastries like the sweet and salty coffee cake or the herb and cheese gougere.

Deliver Us from Delivery: Hudson Valley Restaurants on Delivery Apps

Cool, Calm, Collected: The Restaurant at the Kinsley