December 11, 2019
1 comment
In this week’s roundup of Hudson Valley happenings, the seasonal theme continues, augmented by a solemn-but-triumphant commemorative event at Bard College. 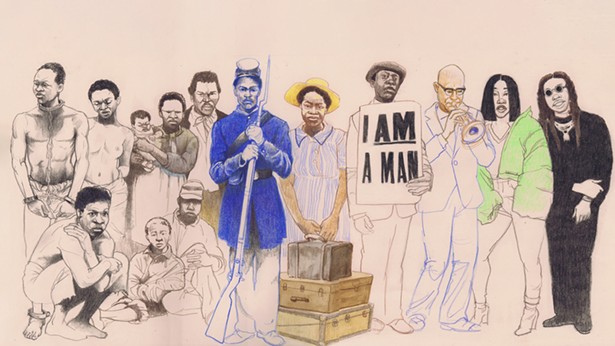 “1619: A Commemoration in Sound” at Bard Fisher Center

In observance of the 400th anniversary of the first arrival of enslaved African people in British-ruled North America, Bard College’s Fisher Center in Annandale-on-Hudson will present “1619: A Commemoration in Sound” on December 16 at 7:30pm. Organized by Bard music professor Dr. Whitney Slaten, the program celebrates the ways in which African descendants’ virtuosic negotiations with Western tonality and forms, as well as cosmopolitan explorations of different sounds, aesthetics, and cultures, have shaped vital contributions to the art, music, and dance of America. Featured are jazz artists the T.K. Blue Quintet, choreographer and visiting artist in dance Souleymane Badolo, and illustrator James Ransome. Tickets are $25. https://fishercenter.bard.edu/

Pete and Pete in Woodstock

On December 13 at 7pm, Danny Tamberelli and Michael C. Marrona, the stars of Nickelodeon’s 1990s hit kids’ series “The Adventures of Pete and Pete,” will bring their riotous, new, live interactive “Nostalgia Personified” show to Colony in Woodstock. An outgrowth of the pair’s podcast “The Adventures of Danny and Mike,” the show is comprised of audio/visual segments and live stage competitions overseen by cohost Jeremy Balon. In addition to the standard “Danny and Mike” fare, this special holiday-edition show will cover Marrona’s experiences while starring in the classic ’90s holiday films Home Alone and Home Alone 2. Tickets are $20-$40. https://www.colonywoodstock.com/

“An Italian Holiday” in Kingston

Fair John ArtSpace and Music Salon in Kingston will present a special seasonal afternoon music salon on December 21 at 2:30pm. Titled “An Italian Holiday,” the intimate concert will star baritone Kerry Henderson and friends performing a selection of Italian opera favorites, Broadway highlights, and other gems from the wide world of song. Italian appetizers and sweets will be served to complement the music. Tickets are $45. https://www.brownpapertickets.com/event/4455540

Built in 1741 by Dutch settlers Adolphus and Nicholas Brewer, the Mesier Homestead in Wappingers Falls takes its name from a later owner, merchant Peter Mesier. Now a museum, the historic home is sited on a public park and is open for public tours. Currently, the house’s downstairs rooms are traditionally decorated for the holidays with candles, greenery, ribbons, bows, and other period adornments; the gift shop is open in the space where Mesier operated his store and offers items relating to local history. See website for a schedule of tours. https://www.wappingershistoricalsociety.org/

Tom Pacheco in Rosendale Tom Pacheco’s name is mentioned with reverence among his fellow singer-songwriters, and in addition to crafting a deep catalog of his own albums the Woodstock-based folksinger has seen his tunes performed by dozens of artists. Pacheco’s annual “Peace Concert” performances at the Rosendale Cafe have become a much-anticipated holiday tradition, and this year finds him returning to the eatery on December 21 at 8pm for a set accompanied by Brian Hollander on guitar and Dobro. Tickets are $20. http://www.rosendalecafe.com/