Adams Fairacre Farms Senior Greenhouse Associate Gail Chickery says that one of the best-selling tropical plants in Adams’s greenhouse is the Phalaenopsis orchid. “For the past two years, East Coast Orchids, located in Montgomery, has been our provider. The orchids are grown on site there starting from almost microscopic plants that come from Taiwan.” (Many orchids are “tissue-cultured” in labs, eliminating the need for damaging wild harvest.)

Chickery continues, “As the main plant buyer, I was fortunate enough to visit the greenhouse and check out their growing techniques on orchids at all stages. Our guide and salesman, Peter Lai, was very informative. He came to our greenhouse in Poughkeepsie and gave a wonderful seminar about orchid care and repotting.  Hopefully, we will continue our relationship for many years to come.”

Orchid Fun Facts
Blue orchids have been dyed—they don’t occur in nature.
Vanilla comes from an orchid (the “bean”).
Orchids can live to be 100 years old. 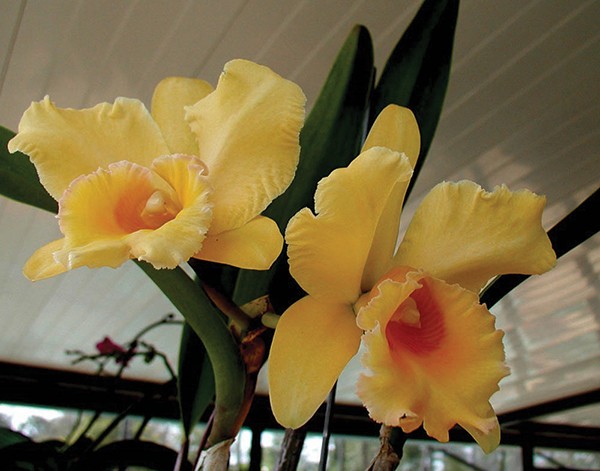 You are gifted or impulsively buy your first orchid. A bit of panic sets in. They're ethereal, celestial, and otherworldly, aren't they? And therefore must be fussy as heck? Not so.

Most orchids evolved in trees, in the junctures where trunk and branches meet (known horticulturally as "crotches"). Their fleshy roots tether them well in what scant organic matter, like bark and leaves, collects there. The roots absorb a modest amount of soluble nutrients as water quickly moves through the coarse organic matter. Given this, it makes sense that orchids have very modest fertilizer needs.

Inside the pot of your first orchid, notice that the medium containing the orchid's roots is usually bark based (or should be), mimicking the aerial substrate in which orchids grow natively.

More clues: Living in the moist tropics, the orchids enjoy a constant humidity, which is why they so love for you to mist them. Yet it is also cool and dappled-shady in the tree crotches, so orchids prefer not to get too steamy hot or have sunlight bearing down on them. That's why they do best in rooms with diffuse bright light but prefer you don't put them in searing direct sun.

It is a bit dicey to generalize, though, because there are more than 25,000 species of orchids, reflecting the most diversity of any plant family (along with asters). There are terrestrial orchids like ladyslippers and those outliers that evolved to tolerate drought and direct sun.

Three Noble Genera
Let's look at the three types of orchids one encounters most often for sale in plant nurseries—the genus Cattleya (Cat-a-LAY-Ah), genus Phalaenopsis (Foul-ah-NOP-sis), and genus Dendrobium (Den-DRO-bee-um). It's important to know which kind you have, as their cultural needs vary. For advice on cultivating orchids as houseplants, I turned to the plantsman with the most well-cared-for home collection of orchids I know, Rick Foster, a Kingston social worker who has been growing orchids for 30 years.

Foster got started when he was living in apartments and had to find plants he could grow and collect in small spaces. "I was intimidated with my first one," he admits, "and it took a couple of years for me to get the rebloom I wanted." Then he learned that orchids are like any other plant: They just need consistent care that mimics the conditions of their native environment.

The Cattleyas, the first group in the Noble Three, are Foster's favorites. He says, "They can be intensely fragrant in a way that is thrilling to me. They are the large blooms in a corsage." He says that Cattleyas require the most light of the three groups. They can take a sunny indoor spot and they get the biggest, so you have to divide and repot them more frequently. Their bloom time varies greatly because they are so highly hybridized. Cattleya orchid roots come off of rhizomes (swollen, "running" stems). When the rhizomes go over the sides of the pot, you know it's time to repot.

For all three kinds, Foster recommends repotting as soon as the orchid you bring home is done with its original blooming. The pot is probably plastic, and you want to get the plant into a terra-cotta orchid pot (readily available) as soon as possible, because terra cotta is more porous, allowing roots to breathe and water to evaporate more freely.

The Phalaenopsis, the next group, are also known as "moth orchids" and are the ones most commonly encountered in stores. Foster says they are the easiest to grow because they need only low light levels, so can be grown on a windowsill where indirect sun or gentle morning sun is all they get. "They are good for people with space considerations," he says, "because they grow upright with just two or three leaves at a time." They tend to bloom in spring for three months.

The third group is the Dendrobiums ("living on trees"), which require more light than Phalaenopsis but less than Cattleya. Indirect sun and early morning sun are best. Foster says they are easy to grow and somewhat fragrant but have a less consistent bloom time. Their flower stalks can sometimes bear "sprays" of smaller flowers rather than one or two big showy ones.

"The leaves on all three types grow a lot in the summer," Foster says. "There's some growth in winter and spring, but then everybody rests in the fall. So in the fall I back off the fertilizing and watering."

The amount of watering depends on how dry your domicile is. Foster says, "If your house is dry, you may have to water the roots in the bark mix three times a week. Don't put your orchid on a radiator!" Instead, put the pot on a simple "humidity tray." With a collection of orchids as extensive as his, it's worth buying a humidifier. But for one orchid, just mist the lovely creature heavily every day when it's actively growing. Foster's orchids go outside under a deck for summer vacation, where they get misted by rain and morning dew, so he gets a break from daily misting then.

Lighting: Foster has provided fluorescent lighting on a timer for his collection, because he long ago ran out of spaces along windows. For your first orchid, pick the kind for which your windowsills will provide the right amount of light. Yellowing leaves is a sign of too much light.

Fertilizing: Foster uses an acidifying type of plant fertilizer like one would use for rhododendrons or azaleas. Every two weeks, fertilize the orchid roots with a dilute solution per package directions. He recommends you take the pot to the sink and pour the fertilizer solution right over the roots. To make things less messy, you can carry the pot on its humidity tray to and from the sink.

Insects or diseases: Well-cared-for orchids don't get many. Foster says the riskiest time for the plants is when they are outside on their summer vacation. "But even if I find that something's eating the soft buds, for example, I can spray with a [nontoxic] insecticidal soap and that's knocked out any bug I've encountered." As to disease, if a plant is sickly, Foster says, "just get rid of it rather than let the disease spread to other plants."