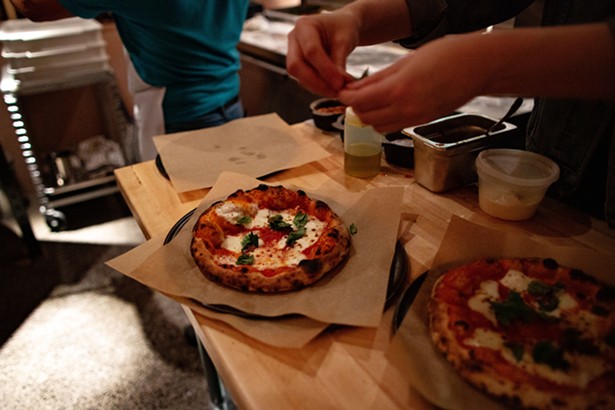 Prior to eating at Lola in Kingston earlier this week, I kept pestering people around town, asking if they had eaten at the new pizza place that opened on New Year’s Day. What was it like? How was the food? How was the pizza?!? The results of my intelligence gathering were fairly consistent—smartly designed spot, tasty wood-fired pizza, well-trained wait staff, but…the prices were a little, um, high for the amount of food you were served.

So, let’s talk pricing first: Lola is not cheap. It’s not necessarily expensive either, measured on the current spectrum of Hudson Valley restaurant menu pricing, but you’re paying for premium pizza, pasta, and antipasti in a swank and swinging joint conceptualized by (now self-exiled) New York City tastemakers Zak Pelaccio and Taavo Somer. This isn’t Louie’s Pizza down the block where you pick up a couple slices while running errands. Make no mistake: This is thoughtful, complex food executed at a high level. It’s just served in an unfussy way. (That Lola is a descendent of Pelaccio’s late, lamented Fatty Crab and Somer’s Freeman is clear.)

The 10-inch pizzas, enough to slightly overfeed one person, range from $15 to $19 dollars. The tapas-portion bowls of pasta are $16 to $17. The antipasti caused the most sticker shock for folks, especially the Bonita Applebaum, a wispy layer of tuna carpaccio for $16. Caveat emptor: If you’re put off by small portions, stick to the (inventive and delicious) pizzas. If you’re looking for suggestions, however, I would advise that you go in a group, order multiple options from each part of the menu, and go with it.

Lola, located on Fair Street directly across from the gleaming cube of brutalist Modernism that is the Ulster County office building, is the second restaurant opened by Taavo Somer and Charles Blaichman in Uptown Kingston. The Kinsley, located within a boutique hotel of the same name, is a 50-seat jewel-box of a restaurant in the stately former New York Bank building that Zak Pelaccio also consulted on. (A third restaurant, Fare & Main, located next door to Lola, will operate as a grab-and-go market, serving breakfast, lunch, and prepared food to go. It’s slated to open in April.)

Zach Wade is the dude (look for the lanky fellow in baseball cap and Hawaiian shirt) in charge of the food at Lola. A veteran of a number of local restaurant kitchens—Mill House Brewing Company, Gusto, and Schatzi’s among them—Wade ran the pizza oven at Gianni Scappin’s Market Street in Rhinebeck. “After 15 years [in the restaurant industry], all I want to do is work with my hands,” Wade told me. Good thing, as all the pizza dough and pastas are made in-house at Lola.

There are six pizzas on the menu at Lola, with two additional pizza specials a night. The wood-fired oven, imported from Naples, cooks the pizzas at 800 degrees, imparting a pleasant blackened cracker note to the sourdough tang of the crust. (The pizzas are cooked for only two to two-and-half minutes.) This is classic thin-crust pie, garnished with bespoke ingredients but judiciously so.

The Margherita ($15), that simple, timeless confection of tomato sauce, mozz, and basil is well wrought, the sauce especially notable for not being unduly sweet. The Papa Patate ($16) is that odd thing, a pizza with potatoes. It’s damn good though, the creamy, fruity Taleggio playing well with the sausage ($3 more) and soft mounds of potato. I also tried one of the special pizzas, a kale and roasted maitake mushroom pie with aged Vermont cheddar and abundant chilies. The kale and mushrooms were crispy, the applied heat intensifying the nuttiness of each. Other pies I’ll be back to try include the Salty Sailor ($18): clams, chilies, Parmigiano-Reggiano, and marjoram; the Cheeky Greek ($16): guanciale, Pecorino Romano, and roasted onion; and Jon Bon Chovy ($16): mozzarella, ricotta, anchovies, and chilies.

A good place to start a meal would be with a salad. Arthur Avenue ($15) is a heaping bowl of antipasti—artichoke hearts, cappicolla, caciocavallo cheese, olives, and onion—tossed with radicchio and sturdy green lettuce. This is what an antipasto salad from Louie’s down the block dreams of being. Another recommended starters is Uncle Rico ($10): potato croquettes served with salmoriglio, an Italian green sauce made from garlic, lemon, oregano, and lemon. The pastas at Lola are tasty, even if the portions are a bit less than diners might be used to. Bolognese bianco ($18) is a traditional Northern Italian dish, though it might not be familiar to some as it swaps out tomatoes for white wine and cream. Lola’s version, served atop al dente mafaldine, is earthy and creamy without being cloyingly so. Other pastas include takes on traditional dishes like cacio e pepe ($16) and all’amatriciana ($17).

For dessert, there’s soft-serve ice cream ($6, chocolate or vanilla), with more than a dozen unpretentious toppings available, from rainbow sprinkles to Gummy Bears.

Lola doesn’t have its liquor license yet, though that is expected to come through before the end of January with full bar service. In the meantime, Lola has rolled out a handful of painstakingly crafted mocktails (all $9), from the piña colada clone dubbed Rupert Holmes to Sober Jimmy Buffet, with celery, lime, jalapeno, basil, and salt.

The dining room at Lola is an homage to unstained wood, with the chairs, tables, and walls made of raw lumber. A neon square outline hangs over the center of the room like a chandelier designed by Dan Flavin. There’s also an exterior patio that will be capable of seating 30, which will make Lola a Kingston hot spot for al fresco dining in the summer. In the meantime, we’ll have to content ourselves with the warm glow of the wood-fired oven and the tasty pies.