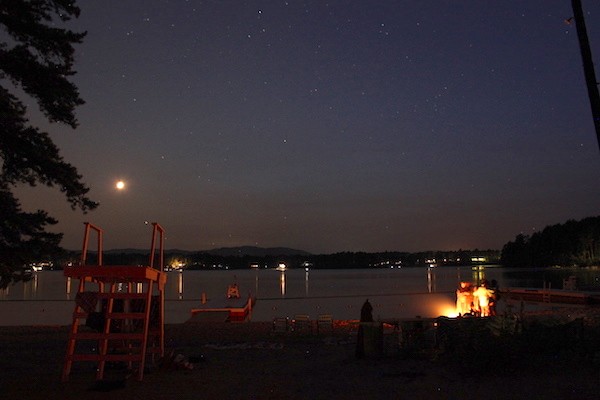 It's almost cliché for astrologers to talk about the dual nature of fire: how it can be warming, life-giving, and inspirational, yet if mishandled, can burn metaphorical bridges and cause literal destruction. Despite the Sun now being in Virgo, there's still a lot of fire in the sky involving key planets. How you feel it and how you use it may depend partly on personal circumstances, but what matters most is the awareness you bring to it.

Here are the key players:

Today, Mercury re-enters Leo via the back door, thanks to its apparent retrograde motion. On Sunday, it will make an exact conjunction to Mars in Leo; notably, this happens in the same degree as last week's total solar eclipse. In between those events, Mars makes an exact trine to Uranus in Aries on Saturday.

The first thing to to notice about this setup is how it very directly rings the bell of the August 21 eclipse. That immediately tells you that this astrology, and what it brings up for you, is related to that event. It's connected to the patterns you were in the process of setting; to the goals and desires you focused your intentions on; and to any unexpected discoveries, encounters, and opportunities that came your way around that time.

You're the only one who can say exactly what fills in those blanks, and it might not be immediately clear. You might need to look back at journal entries and emails; you might need to engage in some deep introspection. The fact that Mercury is still retrograde supports both of those ideas.

You may even need to wait and see what becomes apparent when Mercury stations direct on September 5, since it will also be stationing in the eclipse degree. (Which reminds me: we're entering Mercury's “storm” phase—retrograde protocols regarding communication and travel go double through next week.)

The effects of eclipses can take months to manifest, but the cosmos seems to be offering some kind of condensed process here via this series of events ringing the bell of the eclipse so soon afterwards. The overarching message here is: pay attention.

There's something else special about this Mercury-Mars-Uranus configuration: it's just a couple of degrees away from being in direct contact with the centaur planet Pholus in Sagittarius and the Galactic Core (the center of our home galaxy, the Milky Way). This means we have a grand fire trine operating in the sky.

Yet, this is not just any old grand fire trine: it's one that's bringing in the powerful heartbeats of our cosmic homing signal (the Galactic Core) and the recent Great American Eclipse. This suggests to me that there's tremendous creative potential to this grand fire trine.

The thing is, anything with tremendous creative potential also likely holds great destructive potential. This can be especially true of grand trines: they can act like a whirlpool, with the circular momentum feeding itself. It's essential to ground the energy, to notice what can be used to channel the energy through some kind of outlet.

Looking at the chart for Mercury conjunct Mars, it looks like the “escape valve” is Chiron in Pisces. Although Pisces is not grounded in the way that an earth sign might be, Chiron speaks to a very specific purpose: healing. Anything that perpetuates a destructive cycle needs to be redirected toward healing so that the cycle is broken. Even in a “positive” or creative cycle, it can be important not to let it get too self-contained or insular; to be of the greatest use, something about it must be applied to the wider world or used to foster creativity and healing in a new direction.

In either case, Chiron suggests that documenting what's going on could help you to see and anchor any fires before they blaze out of control, as well as creative sparks that might need to be fanned in a new direction.

Speaking more specifically about the individual players in the grand fire trine, Mercury re-entering Leo is a reminder to watch for willful thinking; that is, getting stuck on an idea and refusing to let it go. Mercury retrograde in late Leo could also remind you of something that had your attention in late July.

Mars trine Uranus wants excitement and adventure, to break out of routines, shed inhibitions, and take risks. The key to making that a process of self-discovery and personal growth—rather than going down in flames—seems to be about self-awareness. Why do you want to do what you want to do? How does it relate to your larger goals and eclipse intentions? Who else will be affected? What small adjustment might ensure that your adventure or risk benefits all involved?

With Mercury conjunct Mars, we're looking at a lot of mental and physical energy teaming up together. There's much you could do with that, but it must be handled with care; this aspect as part of a grand fire trine further emphasizes the need for some restraint—especially regarding one's ego. If you don't really have a stake in something, you don't need to get defensive about it. Do you need to take yourself so seriously? What are your real concerns? If someone is acting defensively toward you, what's that about?

Finally, Pholus is yet another reminder that a little goes a long way right now. That's as true for things like defensiveness, sarcasm, and willful individualism as it is for compassionate gestures from the heart, excitement, or a desire to save the world.

What will it take to be sure you're doing what you can to send out a message that serves the highest good, even as you light up your heart's desires and pursue your eclipse intentions? Chiron in Pisces might not make the most convenient escape lever, but I suspect it might be one of the most beneficial in the long run. Use it freely.