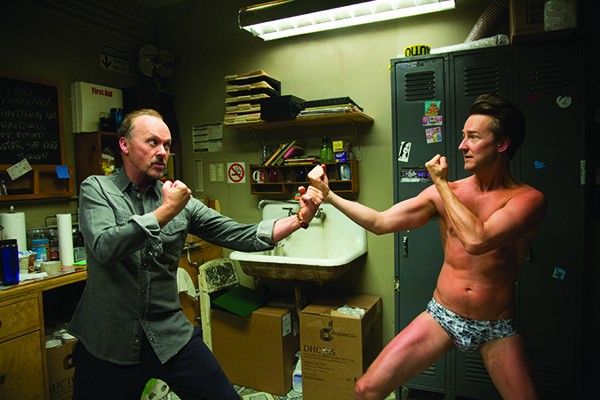 Now in its 15th year, the FilmColumbia Festival (October 22 to 26) has outsize expectations to live up to for the first time. After IndieWire's proclamation last year that FilmColumbia is "one of the great moviegoing secrets of the East Coast," the festival has found that the best way to meet expectations is to just keep doing what it's always done.

"I like to keep things interesting and mixed up and keep pushing the envelope a little bit as far as programming and what works, what the Columbia County audience would like to see," says Festival Director Calliope Nicholas.

The first day of the festival features the highly touted movie The Imitation Game, starring Benedict Cumberbatch and Keira Knightly in the tragic tale of British mathematician Alan Turing and his prosecution at the hands of the British governmentfor being gay. Other major highlights of the 50-plus films to be screened include Alejandro Innnaritu's Birdman with Michael Keaton and Edward Norton; Foxcatcher, which won Best Director at Cannes and stars Steve Carell; Jean-Marc Vallee's Wild, starring Reese Witherspoon (based on Cheryl Strayed's bestseller); this year's Palm d'Or winner, the Turkish film Winter Sleep; and the much-lauded Russian film Leviathan.

If the presentation of quality films is a tradition for FilmColumbia, its new expansion into Hudson adds an experimental aspect. The Hudson branch of the festival will take place in the Hudson Lodge, a ballroom to be converted for optimal film viewing. "Hudson is exploding with young people, artists, a large gay population, and it's completely underserved as far as independent and foreign films go," says Festival Executive Director Peter Biskind. "It's a slightly different audience. We have an older audience in Chatham, but Hudson has a younger audience, and we programmed with that in mind."

"I feel like the move expanding into Hudson is making us a countywide event, and it just seemed natural for us to move down there," says Nicholas.

The expanded venue means off-the-beaten-path films, like Biskind's favorite, Jean-Luc Godard's Goodbye to Language 3D—he calls himself "a Godard groupie from the very beginning"—and Wayne Wang's Soul of a Banquet, about celebrated Chinese chef Cecilia Chiang. Wang and local resident Ruth Reichl, who appears in the film, will be on hand for questions.

Nicholas is thrilled about Appropriate Behavior, a debut feature by Iranian American filmmaker and actress Desiree Akhavan. Nicholas also points to the Farsi-language film A Girl Walks Home Alone at Night, about a punk vampire, as a hidden gem worth seeking out.

For local films, Biskind thinks The Throwaways should enthrall audiences with its examination of urban race politics. Co-director Ira McKinley pursued film after getting out of prison, and he documents the world he came from. "It's a very authentic and genuine feeling film," says Biskind, "and he has total access to that world of poverty, drugs, and also police brutality, and it's really relevant given what's going on in Ferguson."

FilmColumbia also celebrates the 10th year of cutting-edge animation with Gary Leib's Animation for Grown-Ups program, followed by a wine reception with the visiting animators. There will be a mystery sneak preview film on Saturday night, followed by the Post Sneak Gathering at Blue Plate. The following morning, the very popular Screenwriting Panel returns, with actor Scott Cohen giving participating screenwriters a chance to see some of their scripts acted out on stage, accompanied by professional critiques.

Surrounding these events are the films, though, and Biskind says he's very proud of the diversity this year, and counts it as the best festival yet. "We show them back to back for five days, which, if you see them all, is exhausting," says Biskind. "I've often thought of giving an award to the person who sees the most movies—an endurance award."

The FilmColumbia Festival takes place at locations in Chatham and Hudson October 22 to 26. Filmcolumbia.org.