May 21, 2020
comment
Some names have been changed to protect the anonymity of individuals.

For Melissa Walsh, a nurse at Orange Regional Medical Center, the worst part of being a health care worker during the COVID-19 pandemic is having to tell hopeful family members that their intubated loved one’s health is declining. “I have to talk to the family members on the phone as they're hysterically crying and give them updates about their loved ones who might not make it,” says Walsh. “It’s the worst feeling ever.”

Currently, over 10,000 people in Orange County have tested positive for the virus and 419 people have died. Orange County has the second highest number of Coronavirus cases in the Hudson Valley, after Westchester.


Walsh, who has spent every shift since February working with COVID-19 patients, is surprised by the virus’s versatility. She has seen some patients come in with the classic signs of a Coronavirus infection like a fever and coughing, while others complain of fatigue and shortness of breath but never experience a fever at all.

Her typical shift is 12 hours long and the number and length of breaks depend on how busy you are, which, as of late has been very. Walsh wears a fitted N-95 mask for the entire shift, which usually rubs the skin on her face raw. “By the time I take that off, I've got indents all over my face and behind my ears get all red and irritated,” she says.


Before Walsh returns home at the end of the day, she changes out of her scrubs. At home, she puts her clothes straight into the wash and hops into the shower. Walsh’s boyfriend, whom she lives with, is to stay away until she’s sanitized everything. “He stays away from me until I throw my clothes in the wash and jump in the shower to scrub my whole body down,” she says.


Despite all of the PPE that Walsh wears, and her rigorous at-home disinfecting regimen, she is still baffled how she hasn’t been infected. “I don't know how I haven't gotten [the virus] already, because I am constantly around it,” she says.


Jane Doe, a psychiatric nurse from Poughkeepsie, is one of them.


Doe works at the Four Winds Hospital in Katonah, where she says staff were only provided cloth masks in March due to the nationwide shortage of N-95 masks, but they weren’t required to wear them.


One day, a coworker was complaining of a headache. Doe took his temperature and blood pressure, both of which read as normal. Writing it off as a sinus infection, Doe didn’t realize that her coworker was actually experiencing symptoms of a COVID-19 infection. “I didn’t think he had it, because a sinus infection isn’t a symptom,” she says. The next day, Doe found out her coworker had tested positive for COVID-19.


Despite having had direct contact with this coworker, Doe was asked by her employers to continue coming into work, but to wear a mask in case she was indeed infected. “Literally that night I started spiking a temperature of 101 degrees,” she says. Five days later, she tested positive for the virus.


At the end March, when Doe tested positive, the number of confirmed cases in Westchester County stood at around 10,600. That number is currently 32,517.


For 20 days, Doe experienced a high fever, severe body aches, an inability to taste and smell, and fatigue. Two weeks after the onset of her symptoms, Doe was allowed to return to work at Four Winds provided that she wear a mask. According to Doe, Four Winds now has surgical masks to distribute to their employees.


Despite the severity of her symptoms, Doe admits that her experience with the virus was mild compared to other accounts. “It was like having the flu,” she says.


Newburgh resident Ryan Griffiths was not so lucky.


Griffiths didn’t think much of the headache he developed in mid-March. Figuring it was just a sinus infection, he simply took an Advil and went to work the next day. As an employee of the New York State Bridge Authority, he had delivered hand sanitizer and water to New Rochelle only a few days after the city had become New York’s first containment zone. Shortly after the trip, his headache turned into something more severe. 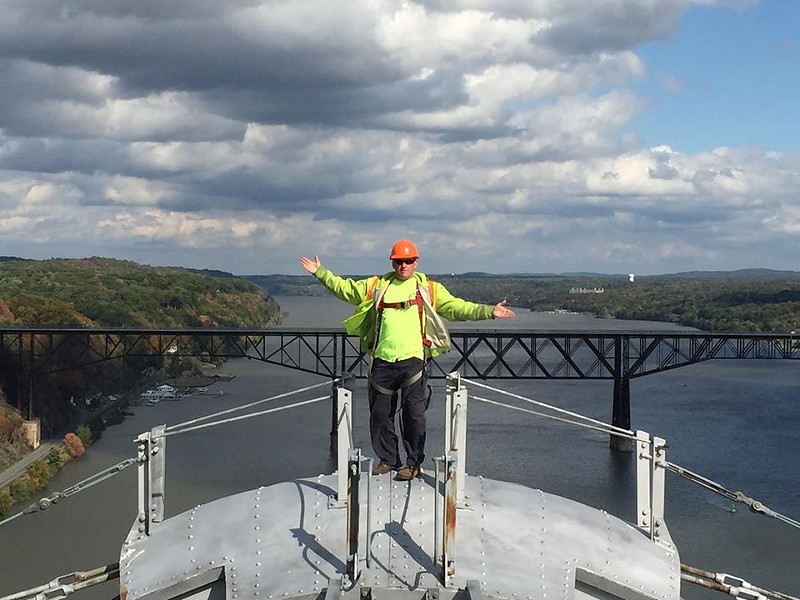 Griffiths started experiencing textbook COVID-19 symptoms: fever, coughing, chest pain, fatigue, profuse sweating, nausea, and chills. At its peak, Griffiths’ fever reached 104.7 degrees, where it remained for several days. He was barely able to muster the strength to make it out of bed, which he had to do a few times a day so that his bed sheets could be changed due to how much he was sweating. “I can definitely see how people are passing away from this,” Griffiths says. As a high school football official, he keeps himself in good shape and has no preexisting health conditions. “I don't smoke, I hardly drink, I work out, but [the virus] just kicked my butt.”


Griffiths had to wait four days to get tested. After a week,, the results came back as positive, and Griffiths became the 127th person in Orange County to contract the novel Coronavirus.


Staying in bed for weeks on end, only able to keep down liquids, Griffiths subsisted on a mix of Gatorade, Pedialyte, and chicken soup. He says that he lost approximately 20 pounds in under three weeks during his fight against the virus. He can’t remember large chunks of the ordeal. “When you lose three or four days of your life and you don't know where they went, that's pretty bad,” Griffiths says.


On April 13, the New York State Board of Health informed Griffiths that he was cleared to go back to work based on the number of days that had passed since he first started showing symptoms, nearly a month after he tested positive for COVID-19. “Even after they said I was cleared, it felt like someone was pushing on my chest,” says Griffiths.


Although he is most likely no longer contagious, Griffiths is using utmost caution when he leaves the house for work, wearing a mask and gloves and maintaining social distancing. “Now I’m a clean freak,” he says. “If I could tell people anything, it would be to clean your mail, the door handles, your remote. Anything you touch, you have to clean.”


Walsh also has a message for others: just stay home. “I've had people that have no previous medical conditions whatsoever in the ICU, intubated,” she says. “It’s just not worth it.”


Both Griffiths and Doe plan on donating blood, since their plasma now carries the virus antibodies that could save someone else’s life. “I’d like to help somebody out if I can,” Griffiths says.