Sidney Bruhl hasn’t written a hit play for 18 years when he receives a script from a former student, Clifford Anderson, that’s a guaranteed success. His wife, Myra, suggests the two men collaborate; Sidney jokes that it’d be just as easy to murder the young man and steal the script for his own. When Clifford arrives later that evening, no one—not even the visiting psychic Helga ten Dorp—can predict the many dark plot twists ahead. Ira Levin’s comedy/thriller was nominated for four Tony Awards in 1978. It’s revived this fall in Rhinebeck. Michael Juzwak directs and Austin Carrothers, Cindy Kubik, Jeremy Ratel, John Remington, and Elaine Young star in this play within a play.

Prepare to be scared by this new immersive theatrical experience based on “The Toll House,” an old British short story written by W. W. Jacobs, author of the horrific story “The Monkey’s Paw.” Participants become the characters, setting out to solve the mystery of a local haunted house and its ghosts. Led through the performance in groups of four, they wear audio headsets and are deprived of their sight, leaving them to rely on their other senses as they move through the non-traditional haunted house at the Phillipstown Depot Theater. This is the latest production from creative team the Psycho Clan, whose haunted repertoire includes shows like “I Can’t See.”

What started as a few artists, activists, and medical practitioners collaboratively trying to solve a problem has grown into a renowned festival and national nonprofit with the mission of expanding artists’ access to healthcare and wellness services. The 11th annual O+ Festival returns to Kingston October 8-10 , this year with the theme “O+ygen,” meant to highlight the events of the last year and remind people of the essentials of staying well. The Magnetic Fields and Lady Pink headline, and scores of musicians, artists, and muralists perform and showcase their work while beautifying the city in exchange for onsite healthcare services from wellness providers. The festival will take place at venues throughout the city, and admission is free to the public.

Founded in 2014 by interior designer Brad Ford, this curated makers’ market is back in-person at Hutton Brickyards in Kingston. Over 150 hand-picked vendors will be at the pet- and kid-friendly modern take on an arts and crafts fair. Smaller items including essential oil room sprays from Flyaway Bluejay and soaps from J. M. Generals will be available. Furnishings will also be sold for interested homeowners. Splurge on pendants from LowLand Studio, coffee and dining room tables from Dzierlenga F + U, and handbuilt clay lamps from Lost Quarry. Shoppers can snack on culinary creations and browse to live music throughout the weekend.

For the second show in their “American Roots-Reawakened” fall season, Bridge Street Theater travels to the modernAmerican frontier with Drama Desk winner Samuel D. Hunter's “Lewiston.” In this intimate production, Alice, a distant descendent of explorer Lewis Meriwether, runs a laughable roadside firework stand in Idaho while dreaming of a better future. Faced with financial challenges and the threat of real estate development, in this poignant play, a family navigates tricky emotional terrain as they struggle to find their place and future in the vastness of America.

Head to Saugerties to take in Harvey Fite’s sculptural marvel, Opus 40, at the peak of fall foliage for this two-part fundraiser. The 12-piece ensemble Spanglish Fly will kick things off at 4pm with their distinctive brand of Latin boogaloo—a mixture of Latin, soul, and R&B that emerged during the 1960s from the barrios of New York City. Formed in 2009 by DJ Jonny Semi-Colon, the Spanglish Fly's range is eclectic: They swing through jazz, funk, and other genres, even covering Amy Winehouse classics like “You Know I’m No Good” with a distinct Afro-Cuban flair. Following the performance, Upstate Film’s Hudson Valley Picture Show will host a screening evening. Brasskill will set the tone with a horn-filled performance at 6:15pm, followed by a screening of John Waters’ classic Hairspray. Stockade Tavern will be onsite serving up craft cocktails; Blue Mountain Bistro will dish up appetizers, and Papa’s Best Batch food truck will dole out barbecued goodness.

David Sedaris at the Bardavon

October 16. One of America’s most popular humor writers, David Sedaris will stop at the Bardavon in Poughkeepsie as part of his tour for his new book, A Carnival of Snackery. In the collection of diary entries written between 2003 and 2020, Sedaris humorously recounts his experience living through different White House administrations and more, recalling sometimes violent encounters with other pedestrians to show the grittier parts of everyday life. The book follows the fall 2020 release of The Best of Me, a collection of 42 previously published works. Following some new story readings and a Q&A in Sedaris’s no-nonsense, dry manner, he will host a book signing in the lobby, with copies available for purchase.

October 16–17.The fifth annual Hudson Valley Pottery Tour guides pottery enthusiasts to studios throughout Ulster County. Visitors are invited into each space and are given the rare opportunity to see and learn about the inner workings of a ceramics studio. Pottery will also be available for purchase. Six studios are participating, with locations stretching from Shokan to Accord. Participating ceramicists include Jeff Shapiro, whose work resides in the Massachusetts Museum of Fine Art, and Doug Peltzman, national exhibit curator and organizer of the event. Admission to all studios is free. 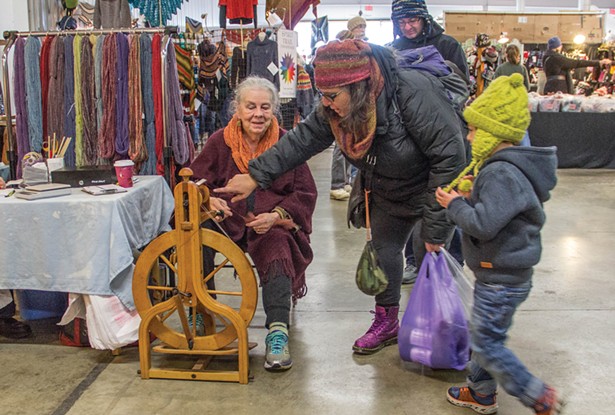 October 16–17. The 41st New York State Sheep and Wool Festival is offering a hybrid event this year, partially online and partially at the Dutchess County Fairgrounds in Rhinebeck. Attend in-person sheep and goat shows and author talks, and see who will take home a ribbon in this year’s fleece-to-shawl fiber competition, where three teams spin and weave fibers to make a shawl from start to finish. Peruse vendor booths for all things fiber from handmade portable spinning wheels to yarn and knitting needles to ceramic beads and buttons. Workshops will be all virtual and range from weaving and felting to nalbinding, basketry, and dying.

The ingeniously creative and community-minded folks at the Wassaic Project are back with another artistic family fright fest. Last year, they staged a haunted parade with artist-designed floats and tons of free candy. This year, they’re producing Haunted Hamlet, featuring seven PG-rated art installations/trick-or-treating stations around the grounds from 3 to 7pm. There’s also a giant plinko game, a mutant forest, and a Halloween-themed “Let’s Make a Deal” game led by a zombie game show host. It’s followed by the Monster’s Ball at the Lantern with live music, DJ sets by Taraka, and a costume contest. (Monster’s Ball tickets must be purchased in advance, and all attendees must wear a costume.)

Fall for Art is celebrating 25 years with its second virtual juried art show and sale, featuring works in a wide range of mediums and styles. Enamel jewelry from Helen Hosking, whimsical quilts from Suzanne Neusner, 3D cut-paper art from Glenn Grubard, and hand-turnedwooden pepper and salt mills from John Franklin are just some of the crafts available for purchase. Hosted by the Jewish Federation of Ulster County since 1997, proceeds from the event support the artists, Federation causes, and regional nonprofits, including the Hudson Valley Food Bank and People’s Place.

October 30–31.Following a yearlong hiatus due to COVID-19, Safe Harbors of the Hudson will be hosting its second annual Newburgh Literary Festival. The weekend-long event will feature an in-conversation event with Joe Donahue, the award-winning host of WAMC/Northeast Public Radio’s “The Roundtable.” Eight nationally acclaimed writers from around the Hudson Valley will engage in paired readings and moderated conversations, including Pulitzer prize finalist Evie Shockley and Erica Hunt, author of Jump the Clock: New and Selected Poems. Attendees can check out a local authors book sale and participate in a series of writing workshops. Learn about writing contemporary horror from David Surface, playwriting and dramaturgy from Shane Bly Killoran, and graphic novels from Drew Morrison. Safe-harbors.org

College campuses have become (again) the molten center of the volcanic culture wars raging across America—just look at the latest imbroglio at SUNY New Paltz about a Sojourner Truth statue. In Eleanor Burgess's barnburning academic drama, a black student visits her white professor during office hours to discuss her paper on the American Revolution. The polite review of her thesis soon explodes into a high-stakes debate over race, history, power, and revolution. When it goes public, what’s been said can’t be unsaid, and both women face the consequences in this play staged at Shadowland Stages in Ellenville.

Al Franken at The Egg | November 6

November 6.Before he was the senator from Minnesota, and the former senator from Minnesota who was shamed out of the Senate more hurriedly than he should have been, in hindsight—remember when politicians had shame?—Al Franken made his living as a funny man. One of the original writers on “Saturday Night Live,” Franken won five Emmys over 15 seasons writing and producing the show. As an author, he’s hit number one on the New York Times bestseller list four times, with cogent analyses of the political climate like Rush Limbaugh is a Big Fat Idiot and Other Observations and Lies and the Lying Liars Who Tell Them: A Fair and Balanced Look at the Right. Like everyone else and their Golden Retriever, Franken has a podcast. (He has more listeners than your dog, however.) Franken—who may or may not be mulling another Senate run—is on the road with his Al Franken: The Only Former US Senator Currently on Tour Tour. It’s sure to be funny. The only question is: Will he offer comp tickets to Kirsten Gillibrand?

Playwright and Garrison resident John Pielmeier—best known for “Agnes of God,” which was made into a 1985 film starring Anne Bancroft and Jane Fonda—has always loved the Faust story, but he’s also felt that Christopher Marlowe’s “Doctor Faustus” and Goethe’s “Faust” had serious flaws. [Ed: Agreed.] In “Marlowe, Goethe, Faust,” Pielmeier has combined the two plays, keeping the best bits (according to him) and interspersing them with meta commentary on the plays and the playwrights. The play premieres with a free staged reading at Denizen Theatre in New Paltz on November 8 at 7pm.

November 19.What better proof that the sun has finally set on the Age of Aquarius than the dissolution of the formerly hip and presently clueless comedy team of Mikhail Horowitz and Gilles Malkine? The septuagenarians take the stage—if they live that long—one last time at Unison Arts in New Paltz for a night of satire, or what passed for it 30 years ago. Since their first gig in Woodstock in 1989, Horowitz and Malkine have logged over 500 gigs in the Hudson Valley and beyond. (This number is disputed, however, as there were certain performances that no one attended, which would seem to put them firmly in the category of “rehearsal.”) Expect a tour through the pair’s greatest hits, including “Rappin’ for Godot” and “The Monthly Meeting of ACOMP (Adult Children of Mediocre Poets).

Revel 32 is staging “Tony n’ Tina’s Wedding,” an immersive theater experience where audience members are the wedding guests themselves. Viewers can partake in the family bickering as the night unfolds. The show promises all the fun of a 1980s Italian-American wedding—an Italian dinner including chicken parmigiana, antipasto, tiramisu, and more will be served, and there’s a cash bar with local craft beers from Poughkeepsie’s Mill House Brewing Company and King’s Court Brewing Company. The production (written by Nancy Cassaro and Mark Nassar) ran off-Broadway for over 20 years and was adapted into a film of the same name in 2004.