Faces of Catskill: Portraits by David McIntyre at CREATE Gallery

Since 2019, Scottish-born, Hudson-based photographer, filmmaker, and artist David McIntyre has been a fixture in Chronogram’s roster of freelancers. When we first reached out to him he was working on the longform art project the Hudson Portrait Pop Up, which he conceived of as a way to engage the community on an ongoing basis while building a repertoire that would eventually lend itself to an art exhibit showcasing the diversity and individuality of his adopted community.

Though we’ve tapped him to shoot everything from restaurants to festivals and town main streets, portraiture has remained his one true love and he has brought a discerning and disarming eye to every photo he’s turned in. So last year, when he pitched us on doing roaming portrait pop-ups to accompany our monthly town profiles in the magazine we jumped at the opportunity.

Nearly every month since March 2022, David and Chronogram staff have set up at a local bar, restaurant, gallery, or other business in the town of choice for an afternoon-long portrait pop-up with members of the community. Sometimes as many as 75 people show up to have their photo taken. “What has emerged from these shoots over the past year is an intimate and tender documentation,” says Chronogram editorial director Brian K Mahoney. “The photos are both ephemeral documents of a particular time and place—Hudson Valley, 2022—but also an enduring portrait of the humans of the Hudson Valley. " 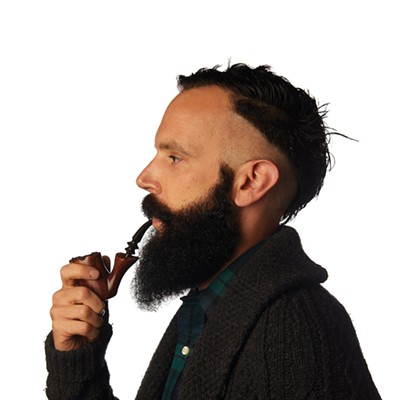 On November 6, Chronogram held a pop-up portrait shoot at the Avalon Lounge in Catskill for inclusion in the December 2022 issue. Some 40-odd Catskillians came out on an unseasonably warm fall afternoon to be photographed. “The Catskill iteration was one of the most stylish thus far,” McIntyre says of the shoot. “Thanks to Liam Singer at Hilo Catskill, for giving us the space that made it possible and to Bren Bo O'Conner and Mabel Bermejo for helping our outreach within the Catskill community.”

The photographer is no newbie to this work—his portrait portfolio includes starry subjects such as U2, Biggie Smalls, and Bjork, and his photo credit has appeared in publications like Vogue, Elle, and Marie Claire. “For me, the joy of the process lies in the momentary connections that arise when people meet,” McIntyre says. “That's what I try to capture.” It’s difficult to look at the photos without feeling that contagious spark of joy spilling out of the frame.

To celebrate the portraits of their community members and recognize the continued dedication and care that McIntyre brings to this work, nonprofit CREATE Council On The Arts will showcase his Catskill portraits in a solo exhibition at CREATE Gallery on Main Street.

CREATE’s exhibit of David McIntyre’s Catskill portraits will run from January 20 until February 26 with an opening reception to be held on January 21 from 4-6pm and a closing reception on February 25 also from 4-6pm.